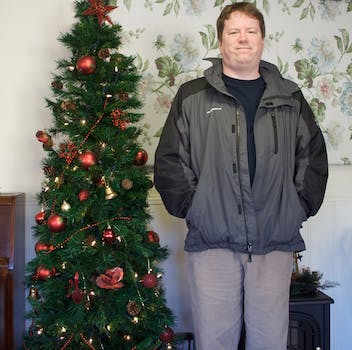 You think your family has Facebook drama? Aaron Olson took his uncle to court repeatedly to settle his.

A Minnesota man may have brought the Streisand effect on himself by repeatedly, and unsuccessfully, taking his uncle to court. The charge? Posting pictures of him on Facebook, along with “mean, disrespectful comments,” according to court documents filed earlier this month.

Aaron Olson, who repeatedly represented himself in court, first petitioned in district court for a restraining order against his uncle, Randall LaBrie, in October 2010.

According to the judge’s opinion, between March and June of that year, LaBrie posted multiple childhood pictures their family. Some included Olson, most notably one of him “posing in front of a Christmas tree.”

The two men were not friends on Facebook. Olson, who lived with his mother at the time, found the pictures on her Facebook account one day when she left it open.

Olson emailed his uncle, requesting he take the photos down. Though LaBrie initially responded that Olson “should stay off Facebook if he disliked the photos,” he soon complied.

However, according to Olson’s harassment petition against his uncle, their ensuing correspondence “could reasonably be interpreted as veiled threats.” LaBrie allegedly posted a “hostile tirade” against Olson online, and ” acquired private childhood pictures” of him, then posted them “with vulgar and coercive statements.”

The court dismissed Olson’s petition, calling the pictures “innocuous family photographs and could not possibly serve as a basis for harassment.”

Olson, again representing himself, appealed the court’s decision on two counts. First, he said, the court hadn’t fully listened to his mother, “who testified that respondent’s conduct was ‘offensive.’”

Second, he contested the court was biased against him for his “socioeconomic status and religious beliefs,” which are not named in the document.

Unsurprisingly, the court rejected Olson’s appeal. He finally asked that the court record be sealed, so as to not “perpetuate the false light effect” his uncle originally intended with the pictures and to not disclose information on his private life.

Photo by ewen and donabel