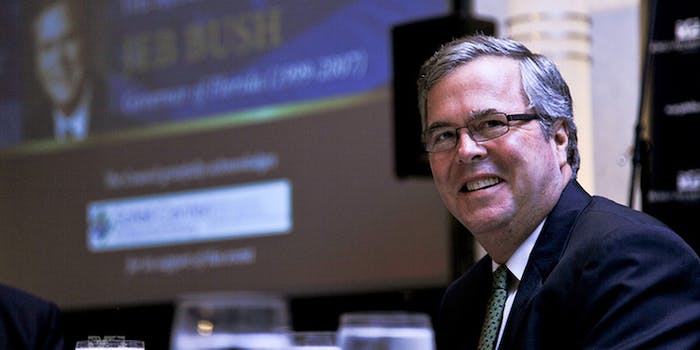 Yesterday, you might have scrolled through the source code for Jeb Bush’s presidential campaign website and noticed something a bit unusual: the synopsis of the 1988 action thriller Die Hard, in which Bruce Willis had a star-making turn as hero NYPD cop John McClane.

Seems like an odd thing to include in the JS of your presidential announcement page. https://t.co/bA8DeSzeyk pic.twitter.com/vwfUbBLt0M

As the New York Times pointed out, these kinds of jokes are fairly standard in Web architectures. “Hillary Rodham Clinton’s site features an ASCII-art version of her campaign logo, and the page source for Rand Paul’s site includes a pitch to join the campaign’s tech team,” the Times’ political blog reported. Still, the Die Hard summary soon disappeared from Bush’s site. Fortunately, it’s probably far from the only Easter egg buried in his JavaScript. Go looking for these seven too.

1) Summary of Die Hard With a Vengeance

Jeb has always preferred the second Die Hard sequel—which showcases the crackling chemistry between Willis and Samuel L. Jackson, a wisecracking New Yorker dragged along for the wild ride—to the by-the-numbers Die Hard 2: Die Harder. And this write-up even includes the alternate ending, where the villainous Jeremy Irons almost gets away!

2) The phrase “Baba Booey” over and over

Jeb is a huge fan of Howard Stern, and so he is of course familiar with how radio producer Gary Dell’Abate got stuck with this nickname after misidentifying the cartoon character “Baba Looey.” In fact, he often calls into C-SPAN talk shows just to yell it live on the air.

Everyone knows how Jeb just can’t get enough Olive Garden in his life. Every year he asks to go there for his birthday, and the rest of the Bush clan wearily indulges, watching him demolish plate after plate of never-ending pasta. But an annual trip isn’t nearly enough, so Jeb has taken to copying the restaurant’s recipes at home. Bon appétit!

4) Some of that green shit from The Matrix

Look, you can’t have a code without this green mishmash of Japanese and numerals in it somewhere. It’s like an unwritten rule.

Whoops, how did that get in there! Suffice to say, this has been a long-standing inside joke between Dubya and Jeb, dating all the way back to a contentious game of beer pong in 1974, after which both brothers swore bloody revenge. It’s not a real threat—not yet, anyway.

6) The smuttiest poems and prose of D.H. Lawrence

Jeb is a man of the people, which means he wants anyone, anywhere—not even necessarily voting Americans—to be able to text him “you up?” or “hey” whenever they like. What a guy.

Photo via wacphiladelphia/Flickr (CC BY 2.0)