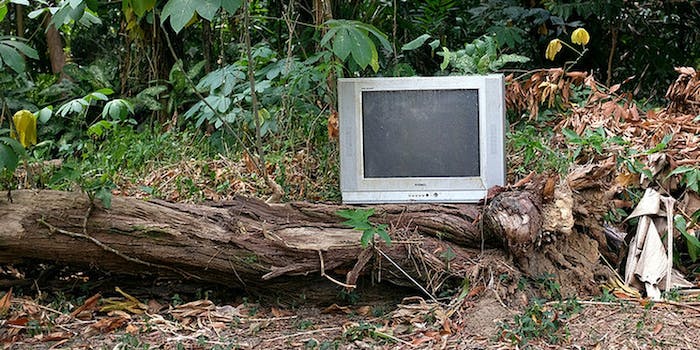 6 perfect ’90s TV shows that are overdue for a comeback

This isn't our nostalgia talking—it was truly TV's golden decade.

With the imminent return/reboot of such seminal ’90s franchises as Full House, Twin Peaks, Boy Meets World, and Coach now in various stages of development, we here at the Daily Dot thought it well worthwhile to dust off some old TV Guides—and VHS recordings of the TV Guide Channel—to find six forgotten ’90s hits that also deserve a second life.

Oh, to live in a world where these shows dominate the airwaves once more:

Hot Prince of the Principality of Monaco

In an effort to capitalize on the success of the Will Smith vehicle The Fresh Prince of Bel-Air, then-Crown Prince of Monaco Rainier III commissioned a 30-minute scripted comedic television show starring himself. Episodes featured such hilarious premises as: “We’re on a yacht headed to the wrong Grecian Isle,” “Deporting a business executive for comparing my principality to Luxembourg,” and, of course, “Why can’t I get the lid off my bottle of caviar when it’s so easy for my wife Grace?” While Hot Prince was less of a fish-out-of-water show and more of a fish-very-much-in-water affair, who wouldn’t want to see it brought back with the current Prince of Monaco, Albert II? I bet that prince gets on the wrong yacht all the time!

NBC and Budweiser saw the success of the Bud Bowl and the success of Friends and said aloud, around a cartoonishly large boardroom table, “This is perfect… synergy.” Thus Buds was born, in which a six-pack of various Bud products all shared the same cardboard sleeve, as well as life lessons about growing up. Sure, the show was at times unrealistic (how did Bud Light afford that corner sleeve without ever having a job?), but more than any show before or since, it spoke to what it was like for a beer to turn 30 in the ’90s. We’d love to see this back today with a whole new array of Bud products (Lime-A-Rita anyone?) and a whole new array of life lessons about growing up malty.

We Need To Talk About Kevin Meaney

In the midst of the ’90s stand-up sitcom craze was a home run that deserves a second look. Kevin Meaney’s ability to shift vocally between “Annoying Kevin Meaney,” “Very Annoying Kevin Meaney,” and “Annoying Racial Stereotype Kevin Meaney” made him the perfect choice for the first sitcom with one actor playing all of the characters. Unfortunately, audiences shied away from the show’s bracing take on what it would look like to see Kevin Meaney on screen in seven different outfits at the same time. However, in today’s streaming ecology, one could see new episodes of We Need To Talk About Kevin Meaney carving out a solid niche audience of die-hard Meaney fans and Tilda Swinton fans who clicked on the wrong thing.

Two Guys, a Bear, and a Salmon-Processing Facility

Talk about a classic that must come back! This should-have-been-beloved show managed to be both a comedy in the relatable workplace setting of an Alaskan salmon-processing facility owned by a bear and a love-triangle rom-com played out between two men and that very same bear.  Unfortunately, we never got to see which man came out on top, as during filming of the pilot, the bear, played by then-unknown bear actor Victor Bear, killed the two male leads—veteran TV actors Harry Anderson and Scott Bakula. One imagines that a reboot featuring a CGI bear in the role of the boss would allow the other actors to survive for at least half a season.

After Victoria Jackson’s lauded stint on Saturday Night Live, where she was known for playing the character “annoying sister of Melanie Hutsell,” Jackson was understandably handed the keys to her own sitcom, Victoria. And boy, was it delightfully off-color. Playing a single mother, working hard to stay off the welfare rolls down at the abortion factory, Victoria took everything we thought we knew about political correctness and turned it upside down. And if any society needs Victoria Jackson to take on the P.C. police, it’s today’s America! Assuming anyone knows where Victoria Jackson is, or what she believes in now, we could just maybe get this project off the ground.

Playing off the success of ABC’s Dinosaurs!, then-fledgling network Fox (known at the time mostly for its willingness to film incidents of police brutality and then televise them with a laugh track) went even further back in time—to the original wacky family. Precambrian Goop! asked what happens when we see the foibles of the modern American family play out in a low-oxygen environment. Memorable characters included lovable yet caustic father Al Meba (voiced by Yaphet Kotto), daughter and mega-babe Proto-Zoe (voiced by Tiffani Amber Thiessen), and wacky neighbor Zack Teria, with his crazy catch phrase: “Get out of my goop and into my mega-continent!” The show’s premise teetered after the introduction of Molly Husk (played with unneeded intensity by Glenn Close). Husk’s efforts to seduce Al and split apart the Precambrian Goop! family drastically changed the tone of the show, and not for the better. Any reboot should rewrite that weird, crablike creature right out of the evolutionary chain!