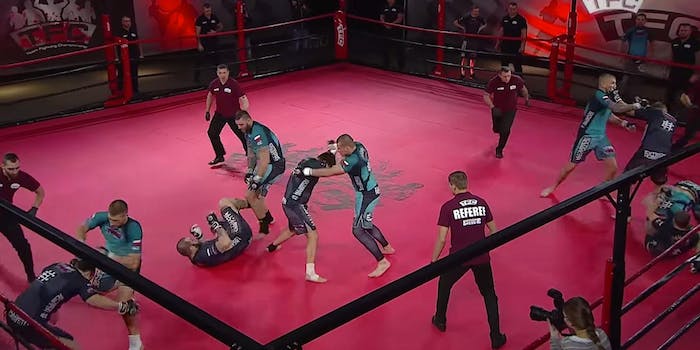 Because there's nothing more fun than a bunch of guys fighting each other for sport.

Mixed martial arts is stressful and gory enough as is, but imagine watching five fighters taking on another team of five. Or actually, don’t imagine it: The Team Fighting Championship made that happen, and it was just as intense as you’d imagine.

When the match between the Barbarians FT (St. Petersburg, Russia) versus HFA (Gdynia, Poland) begins, it resembles one of those massive fight scenes from an action movie. And while it seems pretty fair at first, with a lot of one-on-one combat, it doesn’t take long before team members start ganging up on each other.

It’s sort of hard to distinguish the fighters; they all kind of just look like Viktor Krum from Harry Potter. Regardless, check out the bloody frenzy for yourself:

I’m unsure of what’s worst: the embarrassment of getting knocked out of the battle first or the agony of being the last one standing on your team, with multiple dudes beating you to a pulp.