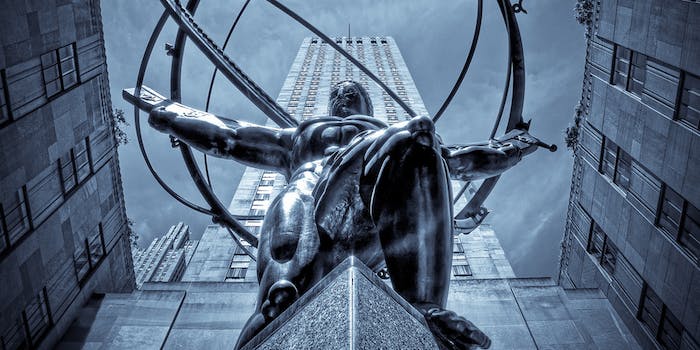 For the love of God, don't call it the 'Comcast Building.'

If you live in New York, you might have noticed something strange on your commute to work this week, as the city’s residents braved the return from the July 4 holiday weekend.

While we were all busy celebrating America, 30 Rock quietly got a facelift—renamed the “Comcast Building” with bright neon letters on the facade of the iconic structure. Twitter quickly went through three of the first four stages of grief—denial, anger, and depression—as the shock of the announcement registered over social media.

I look forward to completely ignoring anyone who ever tells me to refer to 30 Rock as the Comcast Building.

My thoughts on 30 Rock being renamed the Comcast building: pic.twitter.com/vvq8IJilcx

But there’s one emotion you won’t expect to see on Twitter: acceptance. If the change seems more than a bit absurd given that the building’s now former name helpfully describes its actual address—30 Rockefeller Center—what’s even weirder is that Tina Fey’s acclaimed satire 30 Rock predicted the change years ago. In an episode where NBC is bought by “Kabletown,” a clear Comcast surrogate, the building is renamed with its corporate logo on top. When it comes to Comcast, if it sounds strange, it absolutely must be true.

But what’s even more befuddling than falling into a trap laid by one of NBC’s own television programs is that the cable conglomerate made the same mistake as Willis Group Holdings, following the insurance and risk management company’s 2009 purchase of Sears Tower.

Aside from corporate ego, there was no imperative need to slap its name on the front of one of the most beloved, well-known destinations in New York.

Although the folks at Willis likely thought the name was smart advertising on what was then the tallest skyscraper in America, it was absolutely the wrong kind of press. The change proved wildly unpopular with Chicago residents, many of whom refused to recognize the building’s new name. A campaign on ItsTheSearsTower.com collected over 50,000 signatures from furious locals, and a Facebook group devoted to ignoring the switch was still updating its page five years later.

The tower’s name remains such an ingrained part of the city’s identity that many Chicago viewers of Transformers: Dark of the Moon reportedly jeered and booed when the building was referred to in the film as the “Willis Tower.” After all, no resident of Chicago would ever, ever do that. The Chicago Tribune predicted in 2009 that residents would eventually let it go, but that has absolutely not been the case. Leah Pickett—a writer for the city’s local NPR affiliate, WBEZ—listed it as one of Chicago’s “unofficial rules” in a 2013 blog post: “It’s called the Sears Tower.”

Clearly, people still have some feelings on the subject.

If this seems like much ado about a building, the case of the Sears Tower shows that there’s a lot in a name. Of course, it would make almost no sense for the Willis Group to keep the old name (because who wants to give free publicity to another company?), but Comcast wasn’t faced with the same problem. Aside from corporate ego, there was no imperative need to slap its name on the front of one of the most beloved, well-known destinations in New York.

While Comcast might see 30 Rock as little more than a giant billboard, it’s both a tourist hub of the city and home to one of NYC’s most time-honored and romantic traditions. Since 1933, a Christmas tree has been lit in the middle of Rockerfeller Center at the beginning of December—a Norway spruce that ranges from 69 to 100 feet, depending on the year. The tree truly is a sight to behold. For residents, it’s a reminder of the yearly magic of the holiday season—and for tourists or those new to the city, it’s a symbol of what brought them here to begin with.

The Comcast controversy won’t ruin anyone’s holiday fun (as people will probably ignore it the same way they do the “Willis Tower”), but it’s yet another reminder of the tone-deafness that makes Comcast such a profoundly hated company to begin with. In 2014, Consumerist dubbed Comcast as the “Worst Company in America,” the second time it has nabbed the “honor” from the website. The American Consumer Satisfaction Index cited “high prices, poor reliability, and declining customer service” as the reasons for the company’s poor consumer ratings.

The past year has been particularly bad for Comcast, following an unpopular, ill-fated merger with Time Warner Cable and an “embarrassing” customer service call that shined a light on the bullying tactics and harassment the company subjects its subscribers to. But according to Mashable’s Samantha Cooney, Comcast is “fully aware of how much people hate its customer service,” which it’s working to remedy through better responsiveness to complaints, as well as a forum that allows users to share troubleshooting solutions with each other.

But if Comcast wants to dig itself out of its PR hole, it needs to learn from the poor decisions that lead to what have become routine mistakes for the company. Some executive on the top floor of 30 Rock is probably sitting in his chair right now, smoking a cigar, and pondering the Comcast sign. “Job well done,” he thinks to himself, while rubbing his chin. “Good show, old chap.”

However, I can assure you that the view from the ground is very, very different.