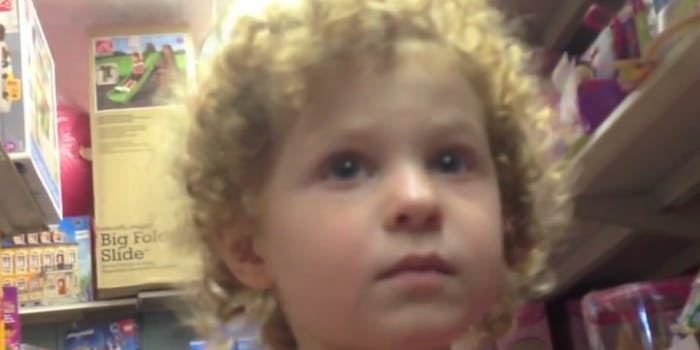 "If I don't get any ponies or any horses, I won't be able to love you anymore."

YouTube user TheIncredibleAdelaRu adores his family, if the few videos on his channel are any indication, but when he denied his daughter a My Little Pony toy, he quickly found out the unconditional love wasn’t mutual.

“I took Adela to the toy store to buy a present for her friend’s birthday,” he wrote on Saturday. But things took a materialistic turn.

Of course, she wanted a “My Little Pony.” She wasn’t exactly pleased when I told her we weren’t there to buy her a toy. After making it clear I wouldn’t be buying her a pony, Adela says to me, “If I don’t get any ponies or any horses, I won’t be able to love you anymore.” My 3-year-old daughter then, essentially, broke up with me and called me old in the middle of the toy store.

The video has racked up over 200,000 views over the weekend, with many YouTubers debating whether Adela could be a Brony, or a fan of the My Little Pony franchise.

InternetVagabond89 was all for brony baiting.

“Usually I’m against putting kids﻿ on the internet for views but considering this was a great baiting of bronies dude….enable ads and get yourself enough money to buy your daughter a toy.”