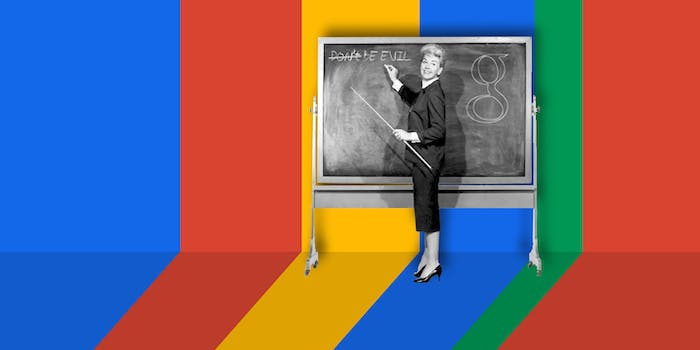 In a recent interview with the Financial Times, Google cofounder and CEO Larry Page expressed the need, a decade after its initial public offering, to expand and refine the company’s mission statement. But what of their official mantra—“Don’t be evil”?

The phrase still appears atop the “Code of Conduct” section of Google’s “Investor Relations” guide, but we think it’s high time that too was replaced with something befitting a tech giant that wields unprecedented influence over the planet and its future. Below we offer a few forward-thinking though humble pitches, from ourselves and around the Twitterverse.

5) “Your girlfriend is mad that you sent her birthday party invite out on Google+, but has she even tried to figure out how ‘Circles’ work? #smh.”

6) “Under no circumstances should you deactivate your webcam.”

“Are you Sarah Connor?” #NewGoogleMissionStatement

“We’re too big to be nice any more” #NewGoogleMissionStatement

13) “In response to a complaint we received under the US Digital Millennium Copyright Act, we have ceased to exist.”

17) “Here, let us depressingly autocomplete that for you.”

Photo via velvettangerine (CC BY 2.0) | Remix by Jason Reed