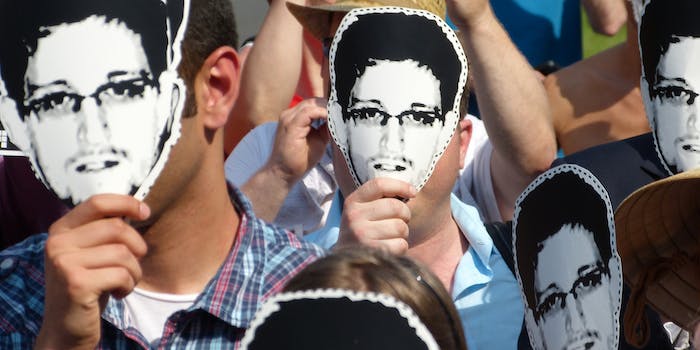 Count one for whistleblowing.

The Washington Post and the Guardian have won a Pulitzer Prize for their series of reports on mass surveillance by the National Security Agency based on documents leaked by former NSA contractor Edward Snowden.

The newspapers will share the Pulitzer for public service.

The Post’s NSA coverage was led by Barton Gellman. Glenn Greenwald and Ewan MacAskill spearheaded the Guardian‘s NSA coverage, while film-maker Laura Poitras provided reporting for both the Post and the Guardian. Last week, the group of four also won the George Polk Award for national security journalism

Collectively, their reports exposed widespread government surveillance by the NSA and GCHQ, its counterpart in the U.K., including the dragnet collection of Americans’ telephone records and a sweeping program that gave the government broad access to Internet users’ private data from companies like Google, Facebook, Apple, Microsoft, and more.

Public outrage resulting from these disclosures have renewed public debate over the right to privacy and the need for greater national security.

Since the Guardian’s first report on the NSA’s telephone metadata collection activities, President Obama has vowed to end the program, though the details of how it will end remain to be seen.

Edward Snowden currently remains in Russia, which has granted him one-year political assylum. In a statement to the Guardian, Snowden praised the reporters with whom he worked for their bravery.

Today’s decision is a vindication for everyone who believes that the public has a role in government. We owe it to the efforts of the brave reporters and their colleagues who kept working in the face of extraordinary intimidation, including the forced destruction of journalistic materials, the inappropriate use of terrorism laws, and so many other means of pressure to get them to stop what the world now recognises was work of vital public importance.

To see the complete list of 2014 Pulitzer Prize winners, click here. You can also find the Post‘s complete “NSA Secrets” coverage here, while the Guardian‘s “NSA Files” archive is here.

Updated with statement from Snowden, links to NSA reporting archives.