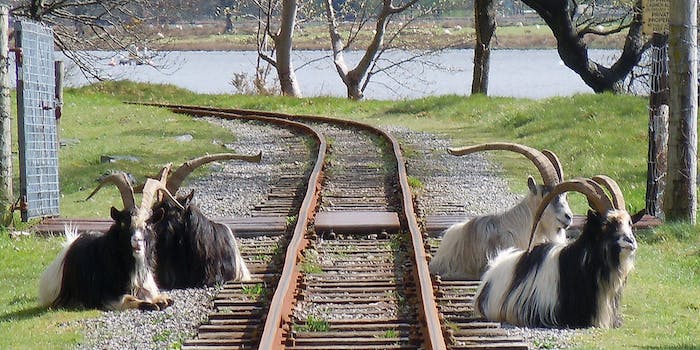 The train in Spain stays mainly in the lane—thanks to some goats.

It sounds like the start of a bad joke.

Railway authorities in Catalonia (an autonomous community of Spain) are downright befuddled after 17 goats made quite the entrance on train tracks in the city of Terrassa, and they’re still unsure of where the goats came from. With the train moving slowly behind them, it’s almost like the goats are being herded by the enormous machine.

It took them 40 minutes to herd the “completely disoriented and frightened” goats to an unused train track, where they were removed one by one without disrupting train service (something New Yorkers might find hard to believe). In udder seriousness, authorities said they had previously had to deal with the occasional cow at that train station.

And you thought bedbugs were disrupting. We’re just kidding, they’re pretty terrible too.