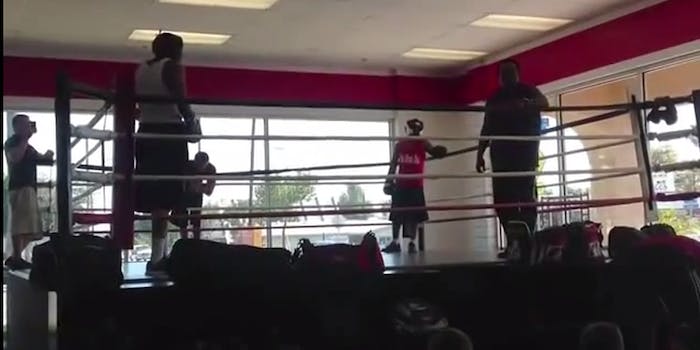 A 20-year-old street fighter barged into a boxing gym, challenging anyone to fight. Here's what happened next.

The scene: A 20-year-old street fighter has just barged into a boxing gym, challenging anyone with the audacity to step to him. Allias Aguilar, five years his junior, put his gloves on and steps into the ring.

“You guys pay attention,” the apparent owner of the gym tells onlookers. “Someone is going to challenge you some day.”

There’s definitely a lesson to be learned here:

The street fighter wears himself out in the first 30 seconds, throwing one wild, rounded punch after another, as if trying to win the impromptu match with one knockout blow. Aguilar just bobs and weaves, protecting himself and buying time.

Then Aguilar goes to work, quickly overwhelming the street fighter. At one point, he backs off, waiting for the bell, but the instructor orders him, essentially, to teach the intruder a lesson.

The gym instructor actually delivers the final blow after calling the fight:  “Now take your gloves off, and get the hell out of here.”