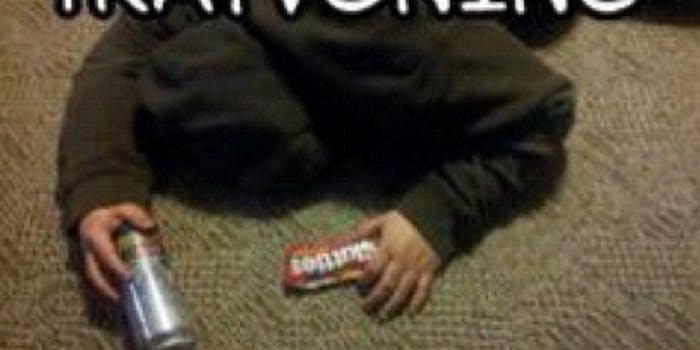 Trayvoning: The most disturbing new meme to sweep through Tumblr

Banned from Facebook, the meme has found a new home on the social blogging platform.

All you need is a hoodie, an iced tea, and some Skittles to take part in the most irresponsible photo meme in years.

“Trayvoning” is the new trend online, and its sick intonations are causing quite the stir.

The image—a disturbing scene that has teenagers and sometimes grown men going to the ground in an effort to emulate the scene that followed Florida teenager Trayvon Martin’s alleged murder at the hands of George Zimmerman—started showing up on Tumblr and Facebook in April, but recently hit a fever pitch after an article appeared in Clutch Magazine.

The meme’s Facebook page, which The Grio reported to have only five likes, was recently shutdown (clicking on a link to the page leads you to your Facebook homepage, and there’s no sign of “Trayvoning” in Facebook page search results).

But the trend has continued on Tumblr, where a search for the “Trayvoning” tag yields more than a dozen photos and heated commentary on the polarizing shots.

“Whatever these people are doing is deplorable and shows and utter lack of human decency,” Tumblr user nonplussedbyreligion wrote. “We are human beings. A fellow human being is dead, and yet people are continuing to act as if it’s a joke. This is bullshit and has to stop.”

“I’m so over stupid people who think it’s ok to ‘mock’ fun of the dead,” drdivah added. “this is NOT showing RESPECT it’s showing IGNORANCE #overit #trayvon #martin #rip”

Ignorance, benightedness, naiveté: you name it, this meme’s got it.