A teenage girl named Zoe came to Reddit’s attention as the victim of cyberbullying on Instagram, but redditors soon accused her of faking the whole thing. What started as a Reddit post aimed at highlighting teenage bullying ended up becoming a witch hunt.

On Monday morning, redditor ilieksammich submitted a link to the r/wtf subreddit titled “I was just browsing Instagram when I saw this. Made me say ‘What in the actual fuck?’. Since WHEN has this sort of behavior been acceptable?”

As first reported by Hyper Vocal, it was a screengrab of an Instagram profile for zoeisafuckingwhore, an account created for the sole purpose of cyberbullying fellow user drowning_out_at_sea.

Immediately, Redditors showed their support for the bullied teen.  “Stay strong, it gets a lot better when your social network has grown up,” wrote one commenter.

The initial sympathy quickly waned after zoeisaunicorn, who was claiming to be the Zoe in question, began commenting on the thread. They asked her to submit photographic verification of her identity, which she did with the image below: 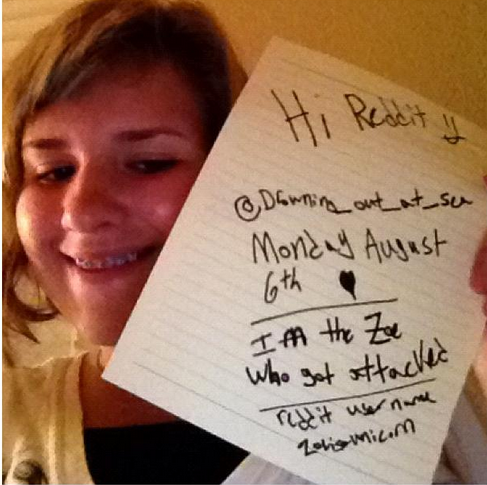 That’s when things took a turn for the worse. People noticed that the handwriting on Zoe’s verification photo resembled the handwriting used in the photographs posted by the Instagram bully. As a result of this circumstantial observation, people began accusing Zoe herself of being behind zoeisafuckingwhore.

“I dont [sic] want to sound like a conspiracy theorist or start a shitstorm but, I think this Zoe made the bully account,” wrote darkangelle.

“Look at the handwriting on the bully account pictures and compare with her Reddit sign/proof. the letters are identical (check out the ‘g,’ ‘z’ and the smiley face). She probably didn’t mean for anyone to find that account but she must be enjoying the sudden recognition.”

Soon thereafter, user throwmeawayname, who likely created the account solely to point out the similarity, linked to an image that visually highlights the similarity in the handwriting: 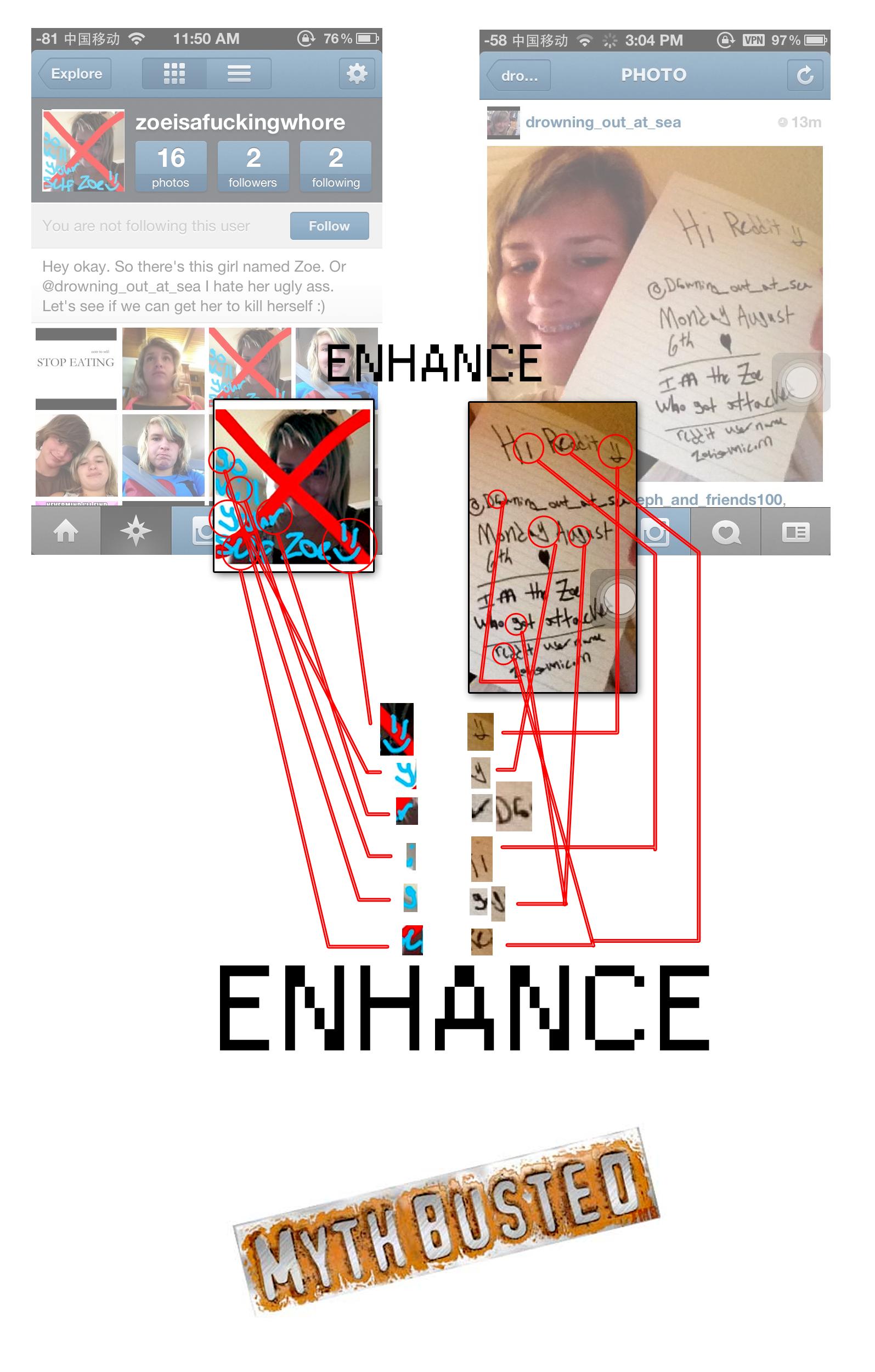 “This girl has learned absolutely nothing except the more shit she pulls like this, the more attention she will get,” wrote listen_hooker. “This isn’t the nicest thing to say, but it actually makes me want to punch her.”

“I bet you’re really enjoying all this attention! I hope you realize how horrible it is to fake something so serious like this.”

Additionally, at least two separate posts aimed at disproving Zoe’s story popped up. The first, “Self-bullying for internet attention?,”  appeared on r/KarmaConspiracy, a subreddit that aims to reveal individuals who post links for the sake of Karma points, the reputational currency of reddit.

Throwmeawayname also started a separate r/wtf post called “Zoe bullied by… Zoe?” that links to the above image. As of this writing, that post has received over 200 comments.

Not everyone has been as vicious. Some have even given Zoe the benefit of the doubt.

“Unless you’re a graphologist, your speculations lack legitimacy and credibiity; therefore, they are unacceptable as evidence,” wrote BeneGesseritBabe.

That same user warned of the perils of lobbing these harsh indictments at Zoe.

“Making such accusations from a position of ignorance and expecting others to take them as evidence and as knowledge is immature, inflammatory and destructive.”

These supportive responses, however, are in the minority and have negative comment karma.