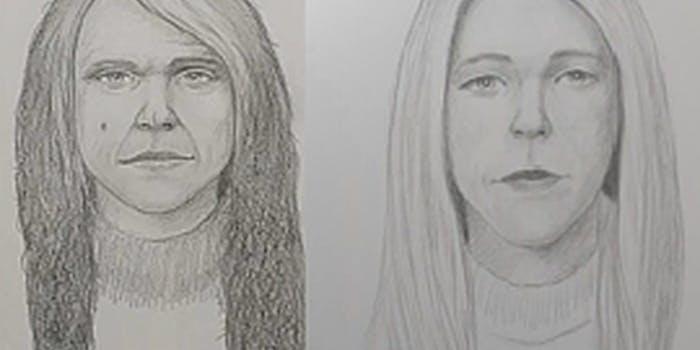 Many viewers have called Dove's "Real Beauty Sketches" viral video "beautiful" and "eye-opening," but others are concerned about its hidden message.

In the three days since Dove’s “Real Beauty Sketches” video went online, it’s received over 3 million views and prompted discussion about inner beauty and self-esteem issues for women. Many viewers have called it “beautiful” and “eye-opening.”

“You are more beautiful than you think,” the video attests.

But if Dove’s entire point seems borrowed from One Direction; the viral video, in which a forensic artist illustrates the way women downplay their own appearances, is cloaking something more serious than the idea that women don’t know-oh-oh what makes them beautiful.

In the video, the forensic artist, who can’t see the women he’s drawing, asks them to describe their physical appearances. The adjectives the women use to describe themselves are pejorative: big, freckled. When they describe each other, however, the words change from negatives to positives: “protruding chin” becomes “nice thin chin.”  Bystanders comment on how “nice” and “pretty” the women’s eyes are. One woman, looking at the two portraits of herself, comments that the self-described portrait is “closed off and fatter…sadder, too.” The other one is “more open, friendly, happy.”

After they see the two photos, the women stop describing themselves in purely physical terms. One of them states that her “natural beauty” impacts everything else in her life, from her profession to how she treats her children. “It couldn’t be more critical to your happiness.”

Some viewers, however, aren’t convinced that what Dove is offering up as “natural beauty” in this instance is what they should be buying. On Tumblr, jazzylittledrops has eloquently argued for a different reading of the video, as less a deconstruction of healthy self-esteem and more an insidious reminder that even when being told they are beautiful, women are still being valued by their physical attributes above all else—and that those attributes have alarmingly racist connotations.

She begins by pointing out that most of the participants are blonde and blue-eyed:

When it comes to the diversity of the main participants: all four are caucasian, three are blonde with blue eyes, all are thin, and all are young (the oldest is 40). … We see in the video that at least three black women were in fact drawn for the project. Two are briefly shown describing themselves in a negative light (one says she has a fat, round face, and one says she’s getting freckles as she ages). Both women are lighter skinned. A black man is shown as one of the people describing someone else, and he comments that she has “pretty blue eyes”….Out of 6:36 minutes of footage, people of color are onscreen for less than 10 seconds.

Dove’s “Real Beauty” campaign has been going strong since 2004. In the past it has used “real women” to attempt to celebrate beauty in many forms. (“Wrinkles? Wonderful.”)  But this isn’t the first time it’s received criticism in the past for its emphasis on physical appearance in the guise of promoting self-esteem, such as a 2007 video in which it depicted a brown-skinned, brown-haired girl who “wishes she were blonde.” 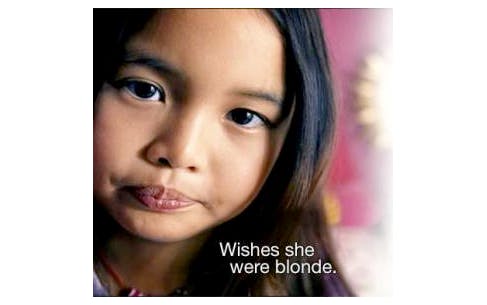 Skin whitening is an extremely popular practice in parts of Africa and Asia; in Nigeria alone eight out of 10 women are reported as users of skin bleach and other lightening products. In 2007, India forced Unilever to pull television ads for Fair and Lovely, perhaps because of the messages they sent that women with dark skin were unattractive; yet in 2009, they were back with another disturbing ad, in which a young girl is considered dowdy until she has a Fair and Lovely makeover:

In this context, the Dove Real Beauty video’s focus on blonde, blue-eyed women and images of women with light skin takes on a different racial overtone, as well as a markedly negative one towards women who don’t fit the thin Aryan beauty model. Jazzylittledrops points out that words like “fat, rounder face, freckles, fatter, 40— starting to get crows feet, moles, scars,” are all given negative connotations in the video, while words like “thin,” “cute,” and “nice blue eyes” are all positives. The blog Simply Dovely, devoted to pointing out all the contradictions in Dove’s beauty campaign, asks: “Is the Dove campaign marketing and even exploiting the fears women have of not meeting these beauty expectations?”

At the close of her rant, which is rapidly gaining attention on Tumblr, jazzylittledrops reminds women that physical beauty is not the sum of their identities:

Brave, strong, smart? Not enough. You have to be beautiful. And “beautiful” means something very specific, and very physical….This is a lie.

Go out for jobs that you want, that you’re passionate about. Don’t let how good looking you feel like you are affect the way way that you treat your children. … Don’t let your happiness be dependent on something so fickle and cruel and trivial. You should feel beautiful, and Dove was right about one thing: you are more beautiful than you know. But please, please hear me: you are so, so much more than beautiful.