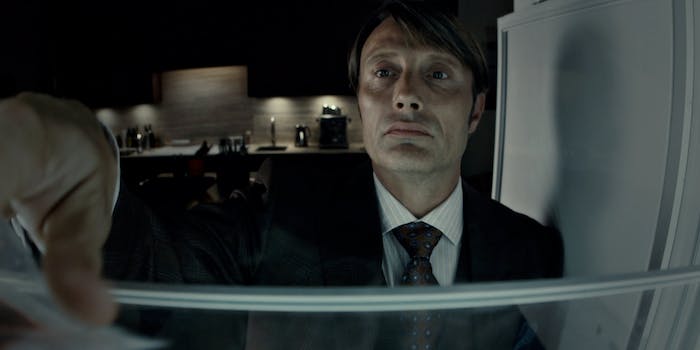 These tweets are art.

The dialogue in NBC’s Hannibal has always been a little… odd. It’s difficult to imagine any real person speaking in the florid metaphors of Hannibal Lecter’s conversational style, although that’s really just one of his many charms.

With the show’s second season recently ending in a maelstrom of bloodshed, we have a long wait before we get to hear Hannibal and Will Graham pick their way through another subtext-laden conversation. In the meantime, one surprisingly accurate Twitter account has decided to pick up the slack: @ZooHannibal.

Your jailers look at you and see a scavenger, raccoon. I see rather a cunning survivor who understands the fallacy of altruism.

The concept is simple, but perfectly executed. What would Hannibal Lecter say during a trip to the zoo? The result is hilariously true to the character’s style, mixing highbrow cultural references with punchlines about death and animal nature.

When Michelangelo finished the Pieta, he carved his name in Mary’s sash. This same impulse led you to eat a hole in the side of your pigpen.

The monkey touches himself not to feel pleasure, but to demonstrate to the zookeeper that he cannot be controlled.

These geese mate for life, ensuring that even as they succumb to madness and sin, they bring with them a sympathetic confessor.

If you were to escape, tortoise, you would be forgotten almost immediately, invisible. It is your enclosure that makes you a god.

Whoever @ZooHannibal is, they’re on a role. The account only started up a week ago, and it already has more than 10,000 followers—including Hannibal showrunner Bryan Fuller.