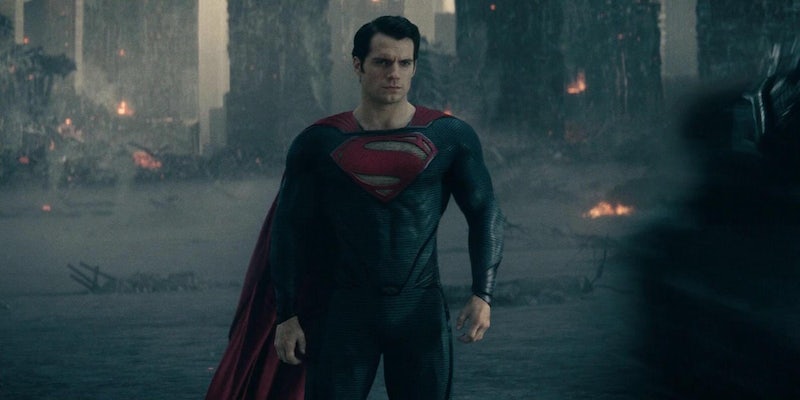 During the promotional tour for Batman v Superman, director Zack Snyder has found himself in the odd position of having to defend the film’s prequel—with dubious results.

To be fair, Snyder is surely sick and tired of discussing the backlash against Man of Steel, which many fans felt was too dark and violent for a Superman movie. However, his latest defense is pretty bizarre. Perhaps unintentionally, he wound up comparing Superman to the genocidal First Order in Star Wars: The Force Awakens.

In an interview with the Wall Street Journal, Snyder was apparently “mystified” by filmgoers who balked at the widespread collateral damage in Man of Steel.

“Well, what about [‘Star Wars: The Force Awakens’]?” he said. “In ‘Star Wars’ they destroy five planets with billions of people on them. That’s gotta be one of the highest death toll movies in history, the new ‘Star Wars’ movie, if you just do the math.”

This is undeniably true, but the two scenarios aren’t exactly comparable. In The Force Awakens, those planets were destroyed as an act of war by an evil space cult. Whereas in Man of Steel, the main problem wasn’t the numerical death toll, but the fact that Superman was complicit in the near-destruction of Metropolis. Remember: Fans didn’t object to the destruction of Krypton, which does work as a comparison to Star Wars.

Superman and Zod spend the final scenes of Man of Steel smashing through skyscrapers full of squishy human civilians, but the film doesn’t really acknowledge the devastating impact of that battle. By failing to move the fight out of Metropolis, Superman looked oddly callous compared to the previous year’s Avengers movie, which showed the superheroes doing everything they could to prevent civilian casualties.

Three years into this debate, we can’t help but feel a little sorry for Zack Snyder. He can’t exactly denounce his own movie, and he still gives every impression of being confused and frustrated by the backlash. Unfortunately, comparing Superman to the Death Star probably isn’t going to help his case.

Photo via Man of Steel/Fanpop