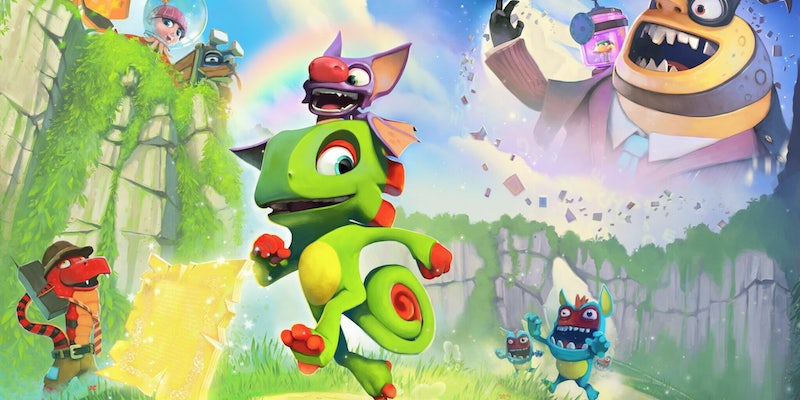 Review: Yooka-Laylee is the best and worst of nostalgic game design

Fans aren't getting much more than they expect with this project.

In the 1990s, British game developer Rare ruled the world of 3D-platforming games with a colorful, collection-heavy take on game design. Titles like Banjo Kazooie and Donkey Kong 64 charmed and puzzled players at the time, making Rare one of the most beloved video game companies. Following a slowdown in output from Rare, a group of former employees banded together and launched a Kickstarter campaign for a spiritual successor to their iconic games from the Nintendo 64 era. Yooka-Laylee arrives this week after many years of development updates with the hopes of bringing life back to the genre.

It is funny, then, that one of the characters you encounter early in Playtonic Games’ throwback adventure is an exuberant T-Rex with a passion for arcade games. There is a brief string of dialogue that pokes fun at the antiquated design of 3D platformers and retro games as a whole. Players are then thrown into a one-off puzzle inspired by popular games from 20 years ago. The obvious irony of a dinosaur functioning as the analogue for Yooka-Laylee’s key inspiration defines the unfortunate identity crisis that plagues much of the overall experience.

It’s not that bringing the styling of popular ‘90s adventure games back to life in 2017 necessarily unmasks the flaws hidden behind nostalgia-tinted glasses, but rather that Yooka-Laylee doesn’t make use of the lessons learned in the time since.

From the onset, players are thrown into a world where every character speaks almost exclusively in puns through a series of mumbling grunts. Mostly everything about the charming presentation and humorous dialogue works, including several jabs at the current state of the industry. Yooka, the spritely chameleon, and Laylee, the grinning bat, make for solid protagonists to follow along on this journey. Both characters afford the player a variety of ways to interact with the world. At most times, though, the objective is to roam around an open environment, smash through enemies and obstacles, all the while tracking down hundreds of collectibles. For fans of the genre, Yooka-Laylee hits on everything expected, and does so competently. The problem is that most fans will have played through similar adventures several times.

Yooka-Laylee isn’t an outdated game, as it accomplishes all that it sets out to do. Each of the five worlds and even the hub stage have distinct, playful themes. The music from Rare’s go-to composer Grant Kirkhope is a consistent highlight. The writing for all characters is smart and snappy. The core mechanics of controlling the colorful heroes use a strong variety of techniques. However, the execution of the final product lacks polish, and playing through Yooka-Laylee is often more frustrating than it needs to be.

For one, the camera jumps between moving at a painfully slow pace as it pans around the map to quick cuts away from a point of reference. This can make platforming unbearable, as you will often be asked to jump onto a moving platform that you can’t see. Likewise, when shooting projectiles, the path of motion will be far off from what you were intending to aim at.

Although Yooka-Laylee allows the player to upgrade their characters with new powers in an incremental fashion by picking up collectibles, it does a poor job of communicating what the purpose of each ability is. You will see objects or characters scattered in one of the levels, but there will rarely be more than a single line of dialogue indicating what you need to do. Players essentially jump into each of the new worlds without an inkling of where to go, other than following a trail of collectible Quills. There are 200 of the feather-shaped items to find in every world, and they are used to access the bevy of new powers.

The other objects to look for are called Pagies, and they tend to be much harder to find. Solving environmental puzzles or clearing one of the many mini-games will reward you with a Pagie, which can be used to expand the world and let you access new areas. Most of the game is locked behind your Pagie count, sometimes making progression impossible if you hit a roadblock with an obtuse puzzle.

Yooka-Laylee’s collect-a-thon continues throughout the entire adventure, offering little direction or cohesive path forward. Still, when exploring the open world, the level design highlights what made games like Banjo Kazooie so beloved. Controlling Yooka is mostly smooth, using jump attacks and  combos to topple enemies and uncover secrets. One of the first and most useful tactics you pick up is the rolling move, helpful for moving quickly. However, several of the puzzles that hinge on precise rolling are hindered by the aggravating imprecision of the game’s directional inputs.

Overall, this is a game of inconsistent highs and lows. The simple joy of interacting with a colorful, childish world serves to remind us of a different time for video games. But when stuttering camera angles send you plummeting off a high platform, the lack of polish is painfully obvious. Further patches and updates might be able to salvage the solid foundation that Yooka-Laylee is built on, but in its current state, it does little more than present a charming love letter to its predecessors.

Disclosure: This game was reviewed on Xbox One with a code provided by the publisher.