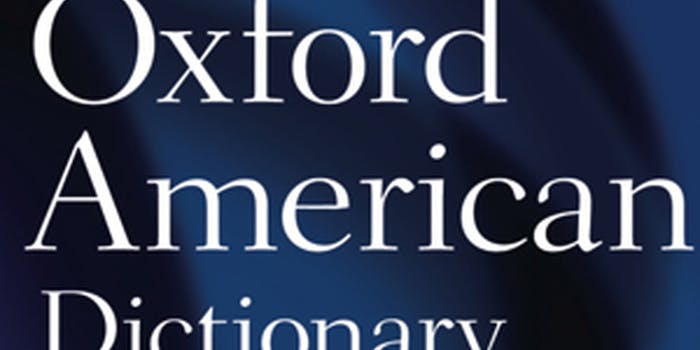 Lindsey Weber bemoans the passing over of YOLO for GIF by the Oxford American Dictionary.

I am pissed. In a shameless attempt for press, the Oxford American Dictionary hopped onto their Tumblr dashboards and chose their Word of the Year, which is, you guessed it: GIF. First of all, is that even a word? It’s technically an acronym. Not ONLY is it an acronym, but it’s a highly contested one. How will OAD handle the tremendous controversy over GIF’s pronunciation? How will they fight off the haters, one-by-one, to define the proper breathing technique, body stance, and face movement that you’re supposed to make as you utter the word? How will OAD capture the pained expression on my face as I scroll by your glitchy attempts at GIFs that refuse to animate? Or the ones that fill the pages of blogs meant to tell me WHAT WE SHOULD CALL ME ______. (Don’t tell me what to call myself.)

Aside from all of that, as this column proudly grabs its namesake from the acronym-turned-actual-word that we call “YOLO,” otherwise known as you only live once, I’ll express admonishment that my dear, sweet YOLO wasn’t chosen for the big prize. Because if OAD was truly going for the press, they would’ve known that making YOLO their Word of the Year would’ve truly amused the masses and made for that much more chatter.

I’d also argue that while GIF (or “.GIF” as it were) has been around for quite a few years now (27 to be exact), YOLO is a practically a newborn babe in comparison. YOLO only goes back to 2004, although not popularized until just last year with the support of rapper Drake. That makes YOLO waaaaayyy more topical than GIF and there’s nothing OAD needs more, IMHO, than coolness.

But that’s why I’m here to help! Hear my pleas to switch your decision, OAD, and make YOLO the champion. I’ve given you plenty of good reason to, but since #IAmNotATeen, I cannot vouch for the voice of “The People.” I can say, however, that we do only live once and none of us should be caught dead pronouncing GIF wrong, let alone at all.