‘X-Men: Apocalypse’ is an entertaining mess

It's time for someone else to take over the franchise.

The X-Men franchise has a bad habit of taking world-class actors, slathering them in blue body paint, and giving them terrible roles. Jennifer Lawrence had more to do in X-Men: Apocalypse than her sorely undervalued presence in the last two movies, but Oscar Isaac was beyond help. Almost unrecognizable as the mutant supervillain Apocalypse, he did his best with a character whose only motivation was a lust for power, and whose dialogue had to be rerecorded and enhanced due to a “creaky” costume.

Following the trend of previous X-Men films, Apocalypse is an entertaining mess of contradictions. It features shockingly bad dialogue, performed to the hilt by an excellent cast. We get thoughtful details like Mystique’s unwilling role as a mutant icon, derailed by nonsense like Magneto’s bland new wife and child, who are clearly doomed from the instant they appear on-screen. Even the film’s aesthetic style is inconsistent, embracing the 1980s setting with fun costume choices and hairstyles, but ruining the final battle sequence with bombastic, meaningless scenes of bloodless urban demolition.

New viewers may find themselves at sea (the franchise has been going for 16 years, after all), but fans of the enthusiastically overly complicated Days of Future Past will probably be satisfied. No one could ever accuse Bryan Singer and Simon Kinberg of ignoring the melodramatic soap opera origins of the X-Men comics, anyway. 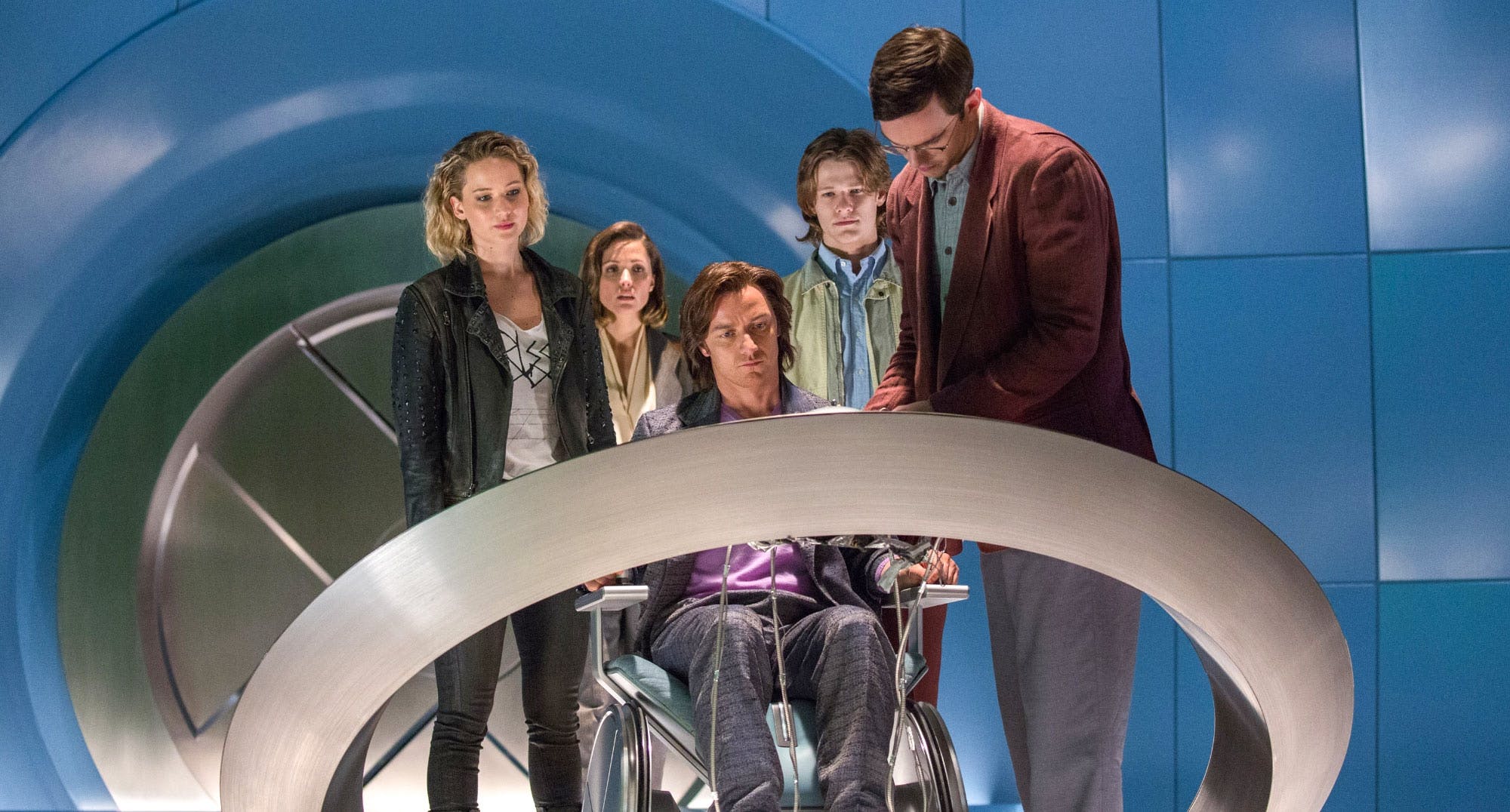 Charles Xavier (James McAvoy)’s love life is a perfect example of Apocalypse‘s wildly uneven tone. During X-Men: First Class, he had a brief romance with CIA agent Moira MacTaggert (Rose Byrne), before wiping her memory. In the 20 years since then (yes, Byrne, McAvoy, and Fassbender are now allegedly playing characters in their 50s), he has matured into his role as the headmaster of the Xavier School, but as soon as Moira returns, he regresses back to his old self, flirting outrageously with an ex-girlfriend who has no idea who he is.

This allows McAvoy one of the funniest scenes in the film, highlighting the clash between his avuncular Professor X persona and the charming douchebag of First Class. However, this completely ignores the paternalistic, unethical nature of his decision to wipe Moira’s memory. As for Moira herself, she has no narrative purpose whatsoever. Perhaps she should start a club with her fellow CIA agent Sharon Carter of Captain America: Civil War, another needlessly banal love interest whose actress deserved better.

Like Civil War, Apocalypse feels like two movies smashed together. One of those movies is the Xavier School narrative that began with X-Men: First Class: It introduces a new generation of mutants and wraps up the tumultuous Xavier/Magneto rivalry. This story is full of human fallibility and adolescent awkwardness, homing in on the unique angst of a character like Jean Grey (Sophie Turner), burdened with a terrifying power she can’t control. She and Cyclops get the most conclusive and interesting character arcs in film, although it would have been nice to see Storm and Jubilee get similar treatment. 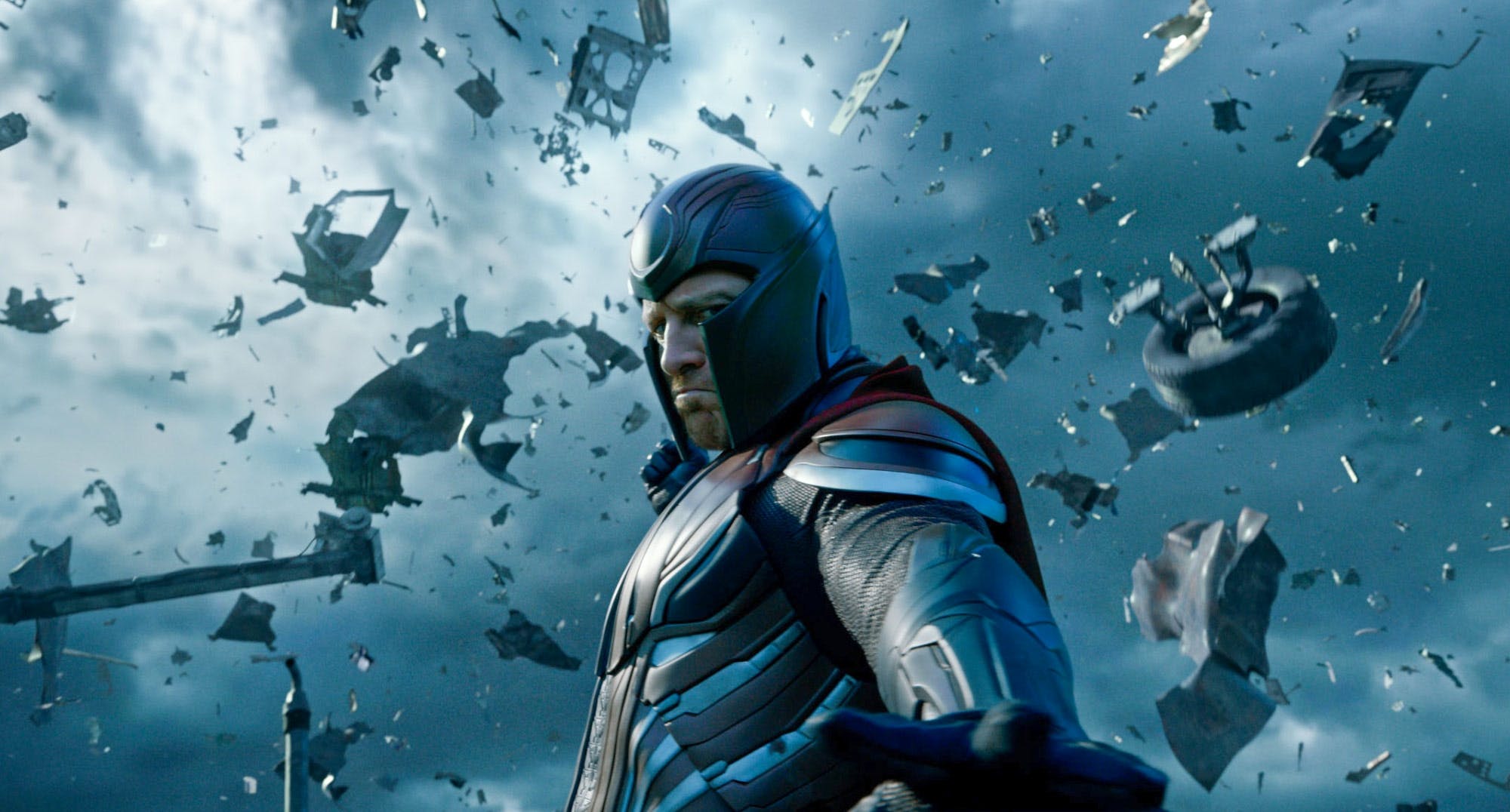 The other half of the movie follows the rise of the ancient Egyptian mutant-god Apocalypse, and it’s basically nonsense. While the Xavier School scenes have fun with the 1980s setting, Apocalypse exists in a world of CGI earthquakes and portentous monologues. One of the greatest moments of unintentional hilarity comes when these two plot strands finally meet. Apocalypse’s minions pose ostentatiously on a mountaintop in their glam supervillain armor, while Xavier lies on the ground in a lavender sweater, looking like the fifth member of Duran Duran.

Introduced as a kind of genocidal mutant messiah, Apocalypse recruits his Four Horsemen—Storm, Psylocke, Archangel, and Magneto—to raze human civilization to the ground. Compared to the more nuanced political subtext of the other X-Men films, his mission seems almost farcically simple. Step one: Find four mutant sidekicks and enhance their powers. Step two: Give them a makeover so the team looks like a cybergoth fetish gladiator troupe. Step three: Take over the world.

That last point is a major stumbling block, because it’s hard to understand how these four mutants went from “angry at humans” to “actively genocidal.” Magneto is a plausible choice, but why was Storm, one of the most iconic X-Men heroes, recast as a supervillain’s apprentice? Her introductory scenes are promising but, like Psylocke and Jubilee, her role feels like it was edited down to a bare minimum. As ever, the X-Men franchise persists in sidelining the roles of women and people of color; a particularly galling decision in a story about bigotry and oppression.

X-Men: Apocalypse avoids the disgrace of X-Men: The Last Stand in 2006, but it’s certainly the weakest link of the new trilogy. While the previous films were lifted up by strong emotional arcs or the compelling struggle for mutant rights, Apocalypse has neither. By the time the credits role, hinting at inevitable sequels, the overall effect is a sense of missed opportunity. Obviously it would have benefited from devoting more time to the younger cast; but beyond that, the franchise also needs new blood from the top down.

Bryan Singer has been working on the X-Men franchise since 2000, directing four of the six main movies. Simon Kinberg wrote or co-wrote three of them, and some of his dialogue for this one was so agonizing that not even Michael Fassbender could deliver it. These men shaped the X-Men movie universe, and in many regards they did a good job, but now it’s time for them to move on.

Fox needs to replace them with people who understand the grotesque optics of glorifying white men in a narrative about oppression. They also need to stop competing with other CGI-fueled blockbusters, and return to the emotional and moral core of the X-Men comics. And for God’s sake, set Jennifer Lawrence free from her blue body-paint hell.