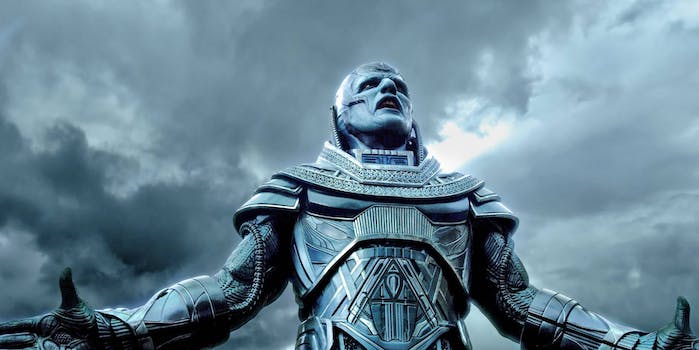 This 'X-Men: Apocalypse' poster was widely criticized for depicting violence against a female character.

After facing criticism for an X-Men: Apocalypse poster showing a female character being strangled, Fox has apologized to fans for its “insensitivity.”

The poster depicts Mystique (Jennifer Lawrence) being choked by the supervillain Apocalypse (Oscar Isaac), accompanied by the tagline “Only the strong survive.”

To many fans and critics, this seemed like a bizarre and potentially offensive way to promote two of the film’s most famous stars. In the words of actress and filmmaker Rose McGowan, “There is a major problem when the men and women at 20th Century Fox think casual violence against women is the way to market a film.”

While the picture does originate from a scene in the movie, it’s hard to see why this kind of imagery would be used to sell a franchise like X-Men. Out of context, it’s just a giant photo of a man choking a woman—albeit while she’s wearing a blue mutant costume.

In response to the controversy, Fox released a statement saying that the studio did not condone violence against women.

“In our enthusiasm to show the villainy of the character Apocalypse we didn’t immediately recognize the upsetting connotation of this image in print form. Once we realized how insensitive it was, we quickly took steps to remove those materials. We apologize for our actions and would never condone violence against women.”

The posters are still being displayed on billboards across the U.S., and, as of this writing, the film has now been on general release for over a week.