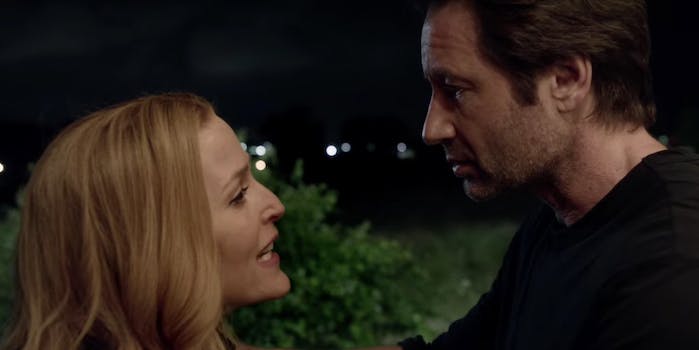 ‘X-Files’ lovers get a taste of the modern fan experience

A water-cooler favorite has returned to a world with Twitter.

Before I had online fandom, I had The X-Files. Though I joined my first message board as a junior in high school two years before audiences stopped saying “I Want To Believe” every Sunday night, I never really found an X-Files fan home online that I could call my own.

Fast forward 15 years, and The X-Files has walked groggily out of a blinding light wearing nothing more than a hospital gown and asking what happened. The show, its creators, and the actors who made us squee before we had a word for the high pitched noise coming from our throats have spent the last year crowd surfing the euphoric high of fans who thought their time had passed. It all started a year ago when Gillian Anderson (AKA Dr. Dana Scully) joined the guys at the Nerdist Podcast, encouraging fans to tweet #XFiles2015. By March, Fox had announced a six-episode miniseries revival, sending the Internet into bouts of joyous screaming, hesitant excitement, and, for some, disgust (because it wouldn’t be fandom without some party-poopers).

When The X-Files wrapped in 2002, people did hang out on the Internet, but it was not the ubiquitous communication portal it is today. People still gathered at real physical water coolers to discuss the “will they/won’t they” dimension of David Duchovny’s Fox Mulder and Anderson’s Scully. There were books of behind-the-scenes information available at bookstores (another thing that used to exist) instead of YouTube clips. The Internet becoming a central home for all things fandom is something I appreciate greatly, but I never thought I would get to enjoy it in real time with my fellow X-Files fans.

Now fans have collectively lost their shit over the show’s revival. The stars got tingly over the attention.

@davidduchovny, I'm sitting here across the world drinking tea and YOU make me tingly.

Fans tweeted with #XFilesDay, and the joy was palpable through the screen.

Ready to watch a show about aliens, people that don't turn lights on indoors at night time, and suits with shoulder pads.#xfilesday #xfiles

The revival evoked nostalgia left and right with a Sunday night premiere (it aired Sunday nights on Fox for five years of its run), the original opening credits, the return of characters both loved and hated, and callbacks that had fans live-tweeting with abandon.

The premiere episode wasn’t perfect. How could it be with such high expectations surrounding it? Fans like myself will forever hold the original series in a special guarded corner of our hearts, and anything that could change our perception of that magical decade is a threat. At the end of the night, I had to sign off of Twitter because I didn’t want to see critics tearing down an episode I really enjoyed personally. The Internet, unlike the water cooler, takes away some of the immediate personal identification with cutting commentary, making it hard for people who actually liked whatever entertainment is on the table for dissection.

There are still happy corners of the Internet where fans are gushing profusely over Scully’s new wardrobe, dissecting the hidden meaning of every reference to the agents’ now ended relationship, and screaming about the callbacks and character reveals. Joyful screaming, I promise. That’s the corner of the Internet I want to be in: The X-Files and I have a date to keep for a batting lesson.