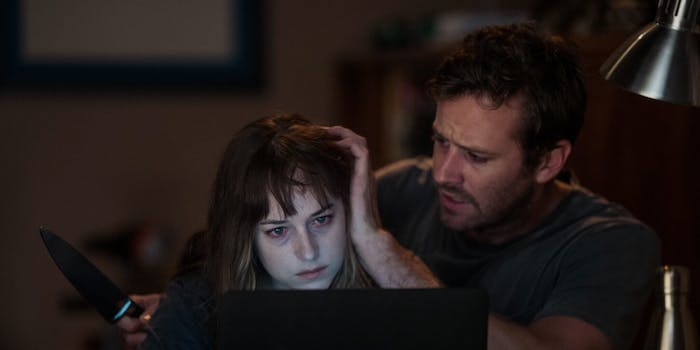 An obnoxious bartender is pushed to the brink in this unintentionally funny horror flick.

Armie Hammer is the quintessential American hunk, and as The Social Network already proved, this makes him perfect casting for a particular kind of a douchebag. In Wounds, he plays Will, a bartender who dropped out of college and is still living the party-bro lifestyle a decade later. In other words, he’s an alcoholic, but he’s found a socially acceptable way to stay in denial.

Written and directed by Babak Anvari (best known for the acclaimed Iranian horror movie Under the Shadow), Wounds was produced by Annapurna Pictures, co-stars Dakota Johnson and Zazie Beetz, and was initially meant to come out in March. In other words, it’s the kind of film that makes you wonder why it’s coming out on Hulu and Netflix instead of in theaters. More often than not, this happens because studio execs preemptively decided it was a flop.

Billed as psychological horror, Wounds isn’t exactly the next Hereditary. Relying on a clumsy kind of It Follows/demonic possession concept, it starts off with a group of college kids leaving a phone at Will’s bar. When he checks the phone, he finds creepy messages and gory photos, followed by a growing sense that someone’s watching him and his girlfriend Carrie (Dakota Johnson). And then there are the cockroaches, which begin to pop up everywhere he goes.

It soon becomes clear that those college kids are using the phone to torment Will with some kind of supernatural entity, but the film never really explains why. The overall concept feels like a half-baked creepypasta story, but I will admit I enjoyed it either way. Anvari is great at ramping up tension through atmospheric sound choices and awkward social situations, and Armie Hammer has excellent comic timing. When you combine that with a naturalistic script about a sweaty dudebro being scared shitless by text messages, the result almost feels like horror-comedy in the vein of Happy Death Day. It’s clearly meant to get more disturbing in the second half, but by the time we reached the end it was actually funnier than before, albeit unintentionally. In my screening, the final scene inspired uproarious laughter when it was clearly meant to be serious. Make of that what you will.

Wounds doesn’t fall into the “so bad it’s good” category, but it doesn’t work in the way the director probably intended. With paper-thin supernatural worldbuilding, the whole cell phone thing feels a little ridiculous. At the same time, Armie Hammer’s over-the-top freakout performance works surprisingly well, coupled with realistic side-characters and some effective jump-scare horror. In one scene, Carrie (now under the influence of a demonic entity) turns to Will and says in an ominous tone, “People look so normal, but on the inside, it’s just all… worms.” Is this meant to be scary? Probably. But in reality it’s hilarious, and I loved it. If you go into this movie expecting effective psychological horror then you’ll be disappointed, but if you’re just looking for a good time, it delivers.

Wounds is currently screening at the London Film Festival, and arrives on Hulu (in the U.S.) and Netflix (internationally) on Oct. 18.