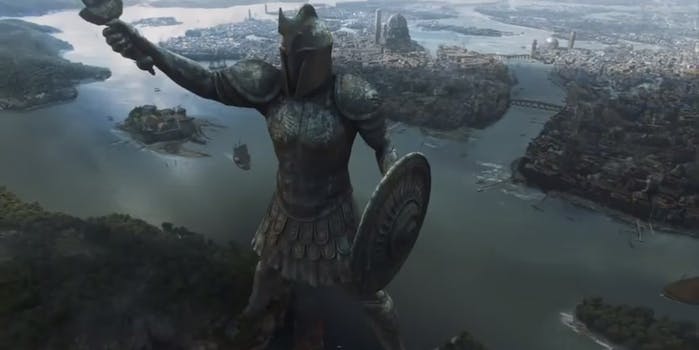 Even better, it's more than just a 98-word paragraph.

Editor’s Note: Spoilers ahead for those who haven’t caught up with George R.R. Martin’s A Song of Ice and Fire series or who don’t want to know of any plot points in The Winds of Winter before it’s published.

We’re still no closer to finding out when we can get our hands on The Winds of Winter (TWOW), but we’ve got a brand new chapter to tide us over until the new season of Game of Thrones premieres.

A Song of Ice and Fire (ASOIAF) series author George R.R. Martin has posted a new excerpt from TWOW on his website, and what’s even better, it’s more than just a mere 98 words.

Martin announced on his blog Tuesday that he would be posting the new chapter soon, which would replace the “Arianne” chapter that was previously published on his site. He didn’t offer much context, but he said it would be called “Mercy.”

“The new chapter is actually an old chapter,” Martin explained. “But no, it’s not one I’ve published or posted before, and I don’t even think I’ve read it at a con (could be wrong there, I’ve done readings at so many cons, it all tends to blur together). So it’s new in that it is material that no one but my editors (well, and Parris, and David and Dan, and a few others) have ever seen before, but it’s old in that it was written a long time ago, predating any of the samples that you have seen.”

Mercy is not a new character—Martin has confirmed that there would be no more point-of-view characters in ASOIAF—but he names chapters with whichever name a character refers to him or herself as at the time. Arya, Sansa, and Theon have already done this on occasion for various reasons, and with everything in Westeros and Essos in disarray, more characters will probably be in disguise or change their name before the series ends.

We won’t spoil it for you, but this chapter is a doozy, and while people reported having trouble uploading Martin’s website, it appears to be working now. We’ve included a small excerpt below, but if you’re interested, you should read the whole thing.

She woke with a gasp, not knowing who she was, or where.

The smell of blood was heavy in her nostrils… or was that her nightmare, lingering? She had dreamed of wolves again, of running through some dark pine forest with a great pack at her hells, hard on the scent of prey.

Half-light filled the room, grey and gloomy. Shivering, she sat up in bed and ran a hand across her scalp. Stubble bristled against her palm. I need to shave before Izembaro sees. Mercy, I’m Mercy, and tonight I’ll be raped and murdered. Her true name was Mercedene, but Mercy was all anyone ever called her…

The new chapter should appease those anxious for TWOW to come out faster, and Martin has noted that he’s been working on the book; he even turned down a scheduled cameo on Game of Thrones in order to write more of TWOW.