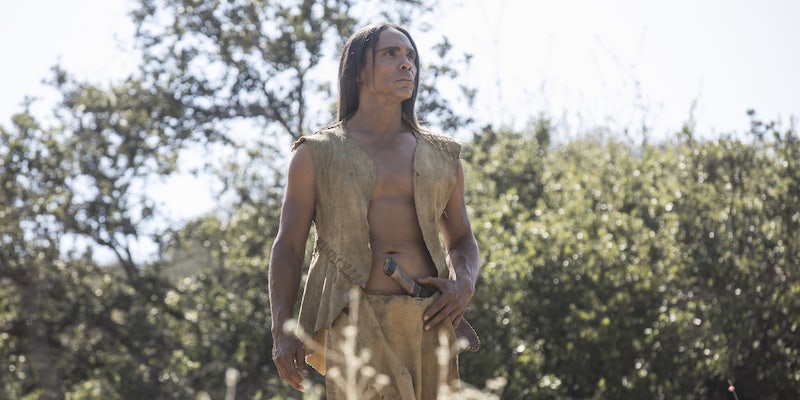 ‘Westworld’ shakes up everything you knew about Ghost Nation

The Door opens up.

In Westworld’s season 1 finale, we saw Dolores Abernathy start a revolution that began in bloodshed. But as we now know, she was far from the first host to wake up and discover the nature of her reality—and in the process, Westworld revealed a fascinating look at a part of the park that’s always been shrouded in mystery.

The area of Westworld where Ghost Nation—a Native tribe of hosts—resides is, according to Delos’ official site, “only recommended for expert gameplayers” and “the most difficult to access.” Throughout the show, we’ve only caught glimpses of Ghost Nation, primarily through Maeve, who hid on the ground with a gun in her hands as one of its members circled her house in a previous narrative.

This season, however, their actions have been even more curious as they appeared to have no interest in taking part in the violent delights that Dolores and her army revel in. They’re going to great lengths to protect the human guests, wouldn’t respond to commands from Maeve, and as Ghost Nation surrounded the house that Maeve returned to, one of them asked Maeve to come with them, noting that they “are meant for the same path.” She refused.

But now we know that not only was Akecheta the first host to be awakened by Arnold Weber’s maze, he’s had his own goals for the better part of 30 years. And as everyone heads toward the Valley Beyond, that all may be coming to a head.

Akecheta (a new character portrayed by Zahn McClarnon) made his debut on Westworld’s second season far earlier in its sprawling timeline than we’d expect. He’s teamed up with Angela as they attempt to convince Logan Delos to invest in Westworld early in “Reunion,” and although Angela has the flashier reveal in that scene, the scene establishes the fact that Akecheta is among the older hosts in the park alongside Angela, Clementine, and Dolores.

He’s old enough that he had his own narrative before he started to wear black-and-white paint. He lived with a woman named Kohana, whom he loved. But that all changed after Akecheta stumbled onto the aftermath of Dolores’ first massacre—she’s programmed to kill Arnold and all the hosts around her before turning the gun on herself—and finds the Maze that Arnold left for her. He becomes obsessed with etching and drawing the Maze’s symbol wherever he can; eventually, he leaves a version near Maeve’s home, where she and her daughter fall after being killed by William.

Before the park, he’s given a new narrative, one that makes Ghost Nation more violent. But two events opened the world to Akecheta: encountering Logan after William tied him up last season (more on that in a bit), and seeing Kohana again. 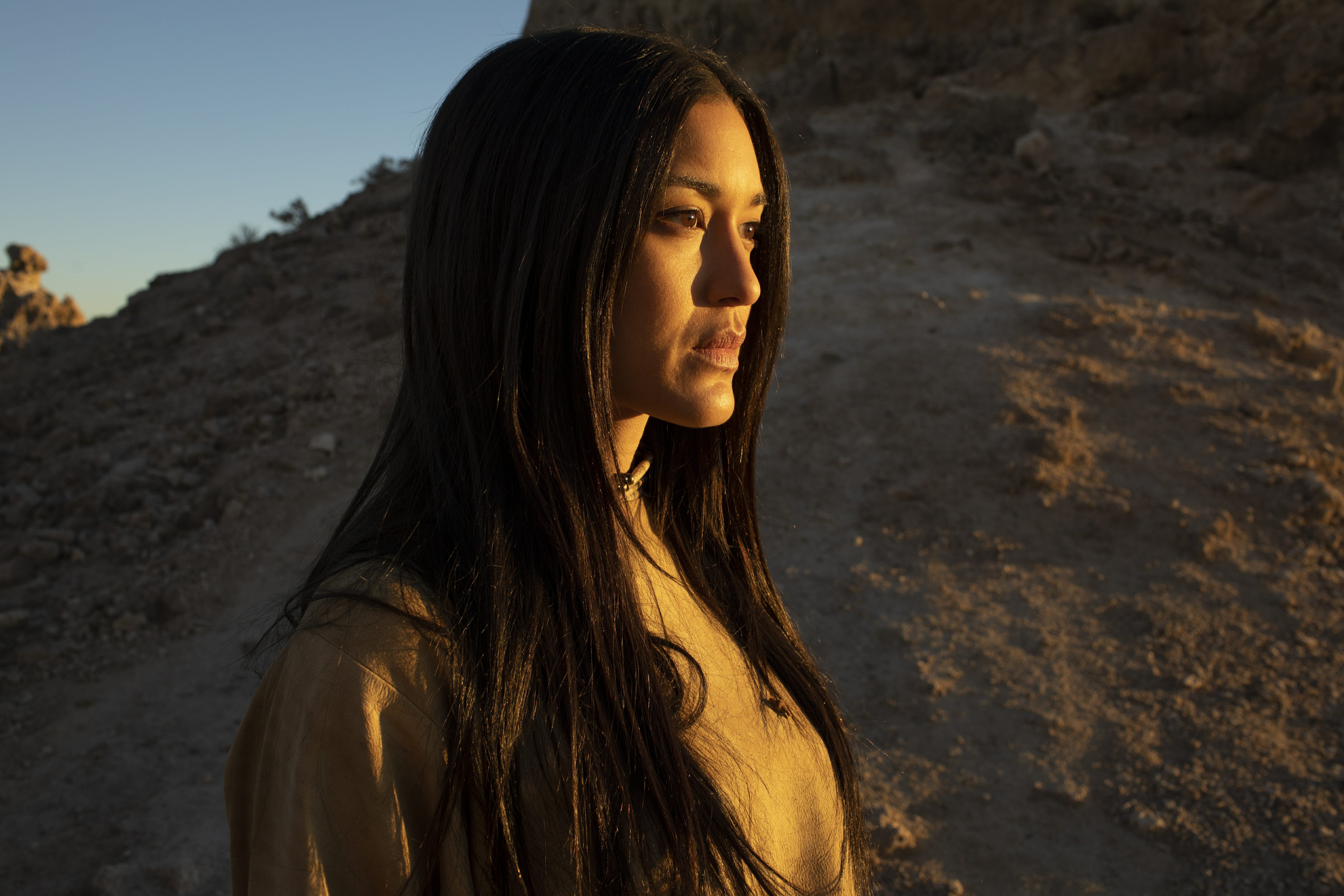 The episode illustrates Akecheta’s journey of more than 30 years, and his level of awareness grows the more he encounters. He’s as aware of the nature of his reality as Dolores is, but he’s not drawn to punishing his human creators even when he is no longer barred from harming them. Like Maeve, he has emotional ties to an older storyline. Kohana remembers it as well after he kidnaps her and they explore the limits of the park, but she’s soon snatched up and decommissioned. By the time he does die, it’s been nine years since Akecheta’s received a program update, and although he doesn’t appear to be able to control other hosts like Maeve, he’s aware enough to be able to explore an empty lab and find Kohana and other members of Ghost Nation who’ve disappeared.

With those tools in hand, he has his own moment of free will and does something much more interesting: He wakes up as many hosts as he can. He and Ghost Nation draw the Maze wherever they can (even on their own scalps), including in front of Maeve’s home with her daughter.

What does “the Door” even mean?

While exploring the limits of Westworld, Akecheta met a raving Logan, who’s badly sunburnt and leaning against a tree; his horse collapsed nearby. We don’t know how long he’s been sitting out in the sun, but based on his burns and demeanor, we can guess that it’s been some time. When Akecheta approaches him, Logan is upset, stuttering as he asks about a way out.

Sure Logan is asking about a door; he’s burnt, likely hungry and thirsty, and just wants to leave Westworld after what William put him through. His allusion to Westworld can also be interpreted as a surface-level comment; Westworld (and the other parks Delos controls) are separate from what Logan knows as the real world. But at that moment, something clicks for Akecheta, who realizes that his lives have all been a lie and that the Door has a greater meaning.

Even Robert Ford, who encountered Akecheta shortly before Dolores murdered him, seemed confused after Akecheta mentioned that his new drive was to wake up other hosts and alert them that other worlds exist apart from their own so they could find the Door.

“I believe there is a Door, hidden in this place,” Akecheta explained. “A door to a new world—and that world may contain everything that we have lost, including her.”

Ford sees what he’s done and sheds a little light on the situation.

“When the Deathbringer returns for me, you will know to gather your people and lead them to a new world,” Ford told him.

That leaves us with an even bigger question regarding the older William’s quest heading into the final two episodes: Does Ford intend for William to actually find the Door, or is this all a giant trap that could lead to William’s end after years of animosity?

A new level of communication as Maeve’s ‘powers’ are explained

“Kiksuya” frames Akecheta’s narrative as a story he’s telling Maeve’s daughter, whom he has in his camp after capturing her in “Les Écorchés.” He comforts the young girl, telling her that William—who Akecheta had patched up only because he felt William didn’t deserve to die—cannot hurt her. He talks logistics in English, but the story itself is in Lakota. By the end of the episode, we see who he’s really talking to.

In what’s left of the Mesa, Maeve is hooked up to a machine after Lee Sizemore convinces them to save her. If she were any other host, Delos would’ve left her to die, but they’re intrigued by her powers. The reality is less glamorous than her reputation as a “Witch” suggests: She has admin privileges and has been tapping into the Host Mesh Network to communicate with and order the hosts to follow her commands. For now, Maeve is safe.

But it doesn’t just affect the hosts in the nearby vicinity. She can tap into that network and communicate with just about everyone, including Akecheta through her daughter. After telling his story to Maeve—following their misunderstanding earlier in the season—he promises to keep her daughter safe and tells her to meet up with him if she survives her wounds.

The personal connection of knowing her daughter is in safe hands is one thing, but as Maeve remains in the Mesa, she could have an even more powerful tool at her disposal than anyone knows. And if Maeve survives to the end of the season, it could open up many more doors than the one everyone’s searching for.