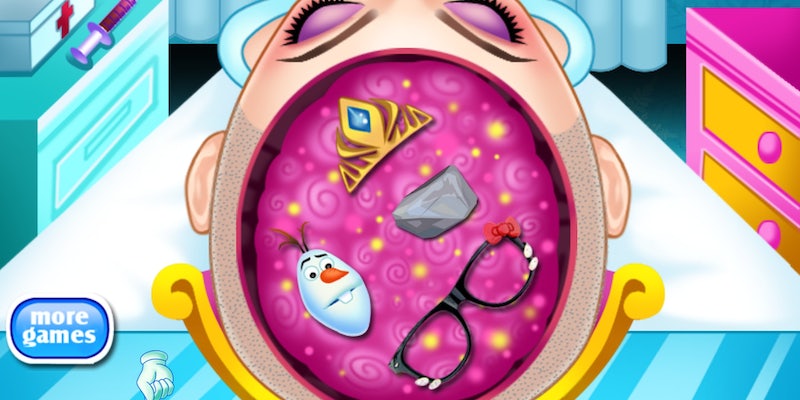 Your guide to the weird world of knock-off ‘Frozen’ apps

Disney’s Frozen shows no sign of stopping its year-long reign over the cultural consciousness. The demand for all things Frozen has created a run on toys and other merchandise in department stores across the country; but on your phone, mobile apps devoted to the film—or at least to unlicensed Frozen ripoffs—are in endless supply.

Frozen apps are so numerous that you can pretty much divide them up into subgenres. There’s the fashion makeover genre, the coloring app genre, the tile shuffling genre, the Flappy Bird clone genre.

And then there are the truly weird genres that break the mold and branch off into something altogether more disturbing. The injury subgenre. The surgery subgenre. The—heaven help us—birth delivery subgenre. And it gets creepier from there.

We took a look at some of the more popular and just plain weird apps from among the madding crowd, including some of the worst of the worst. Here they are, rated on a zero (low) to five (high) scale.

What: A Flappy Bird clone in which Anna, a snowflake, and a reindeer jump over pipes in ice caves. 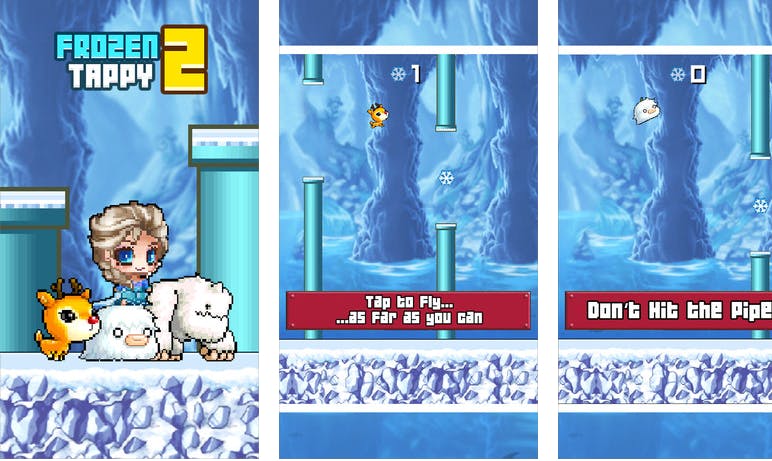 Cuteness: 5. The graphics are the best part of this game—actually cute and catchy.

What: You’re a troll who must save the princess by following her through the mountains, which involves dodging a bunch of comically clunky giant ice cubes being tossed at you from the heavens. 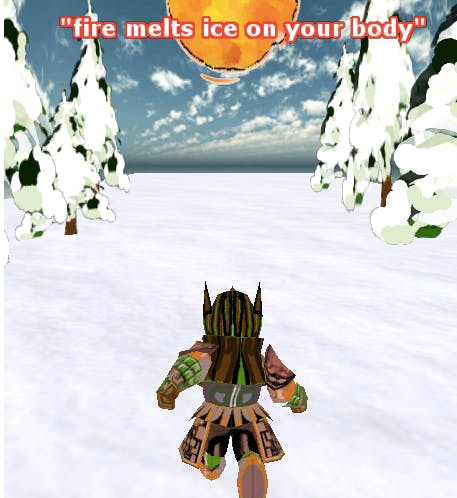 Difficulty: 1 to 5. Once you’ve mastered the art of not getting hit by giant ice cubes and not running through fire, this just becomes an endless Flappy Bird-esque existential chase with no end or variation in sight.

What: Anna jumps over snowmen. That’s it. 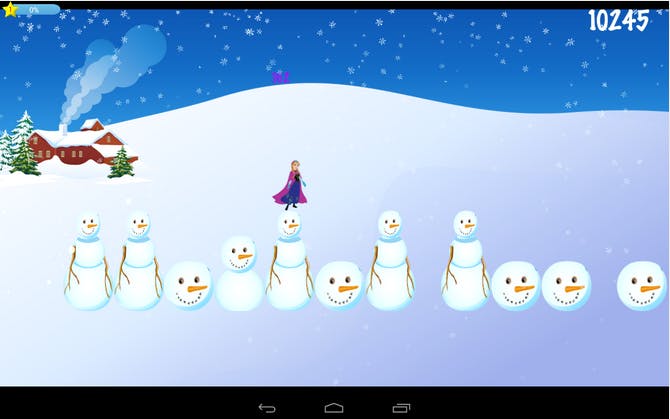 Weirdness: 1. I desperately wanted to read weirdness into this mess, but compared to later games on this list, it’s actually a relief.

Cuteness: 3, if only because it’s kind of fun to watch Anna falling into a snowy abyss to the tune of Jingle Bells while an omniscient Santa Claus says laughing, “Ho, Ho, Ho!” OK, maybe this game is a little weird.

Difficulty: 4. It took me forever to grasp the rules, which aren’t really intuitive. Basically, you have to follow a prompt telling you whether to tap the screen with one or two fingers to make Anna jump. It’s basically the Dance Dance Revolution of finger-tapping. Between the glitches, the annoyance factor, and my lack of finger coordination, it’s hilariously difficult.

Fun: 3. Mute the sound, but this was actually pretty fun.

What: A cool drawing tutorial app that guides beginning artists and doodlers through the steps of drawing various characters from Frozen. Best when used with a stylus. The app also has a handy guide to download other apps from the same creator for other familiar cartoon characters from other franchises. (Available on Google Play.) 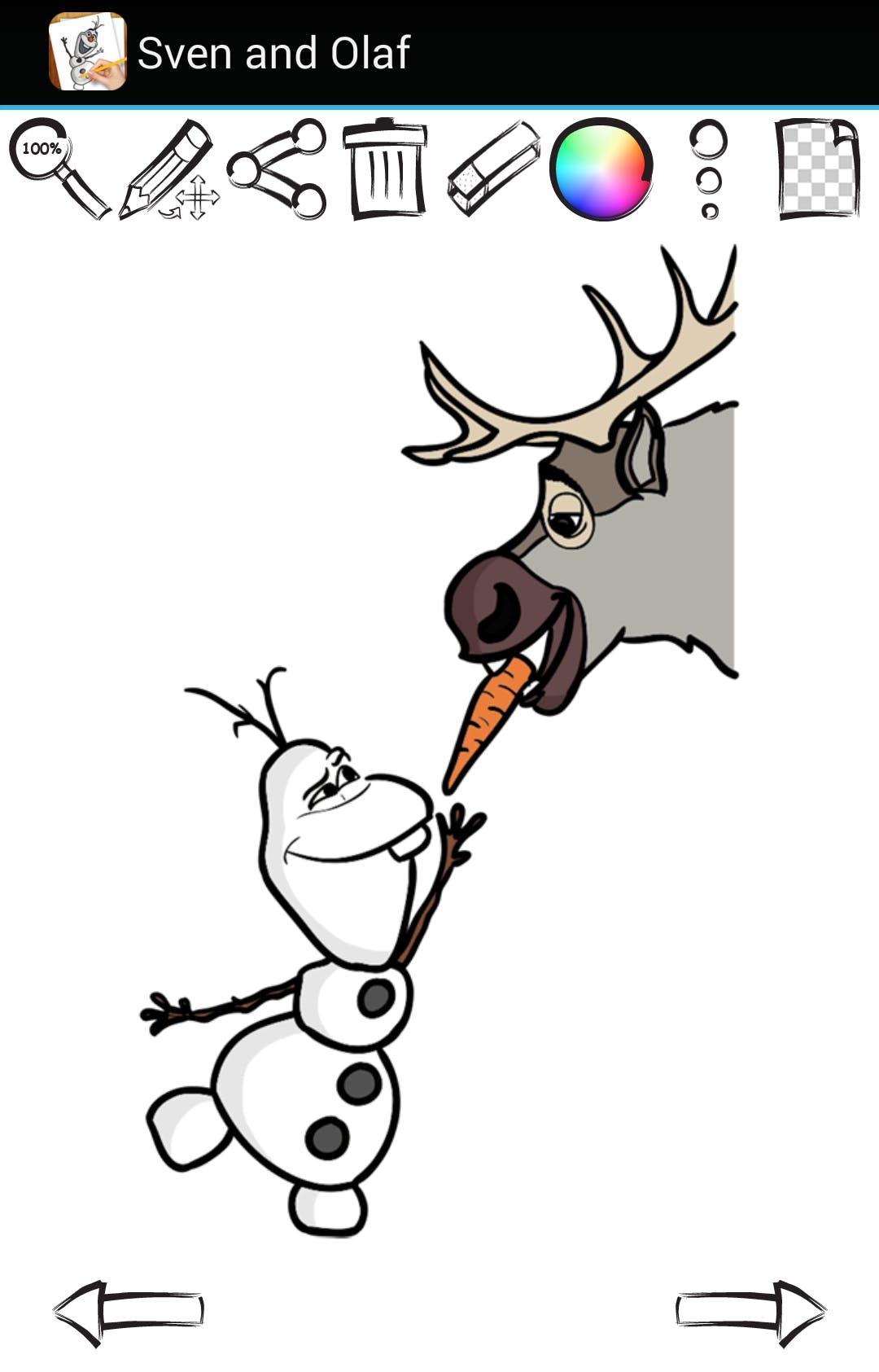 Weirdness: 0. This just has cute step-by-step drawings of the characters.

Cuteness: 4. You can even choose between “Sven” and “Cute Sven!” This app’s thought of everything.

Difficulty: 2. Best when used with a stylus. You might have to help younger users zoom in or out to capture pesky details.

What: A simpler variant of the coloring app above, suitable for younger players. 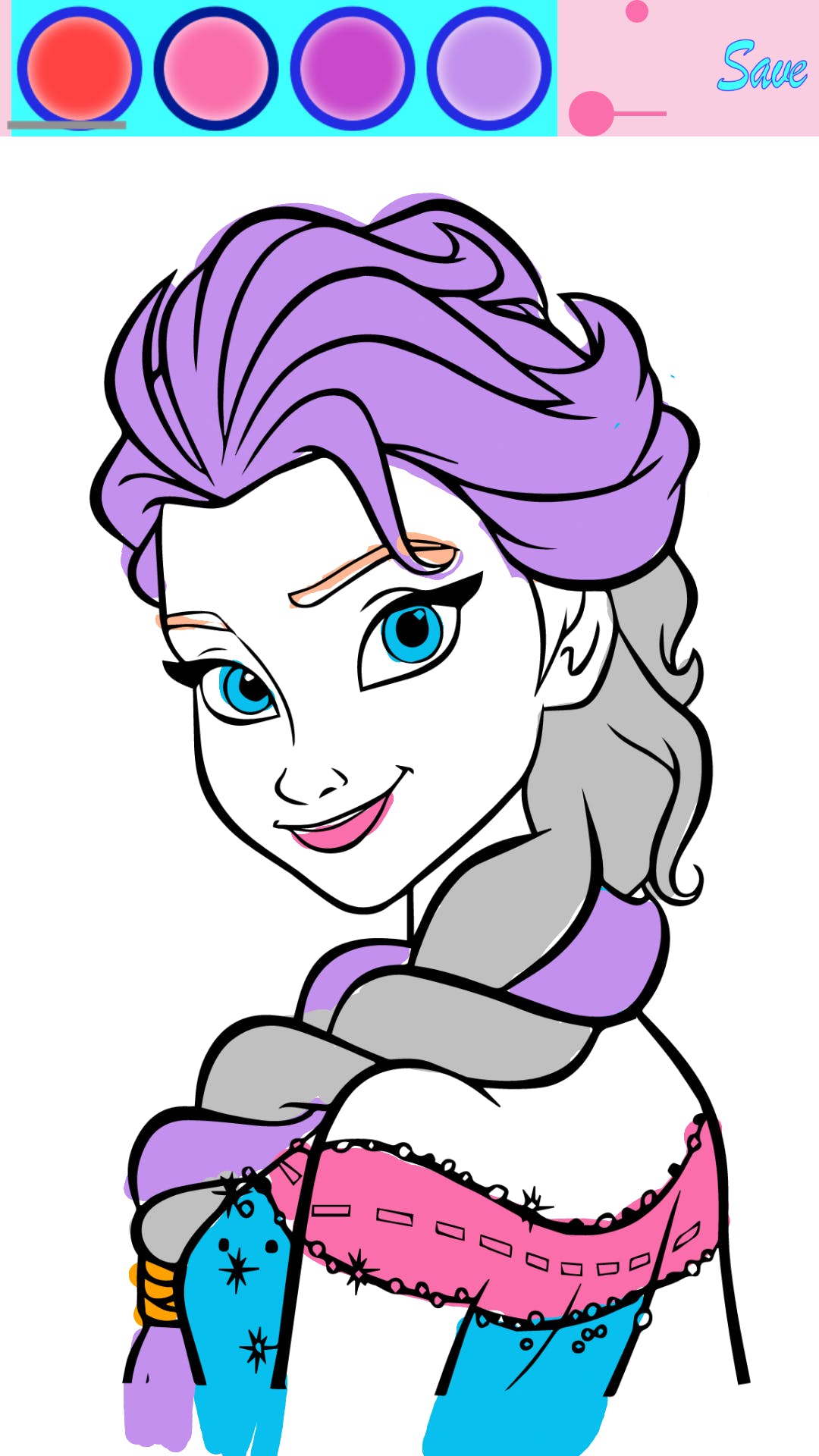 Cuteness: 5. The art is solid and looks like it came from an actual coloring book.

Difficulty: 3. You can’t really get too detailed in this app, but it’s clearly not designed for artists in mind.

What: Flappy Bird with an Olaf-like snowball creature who propels himself into the air by farting. 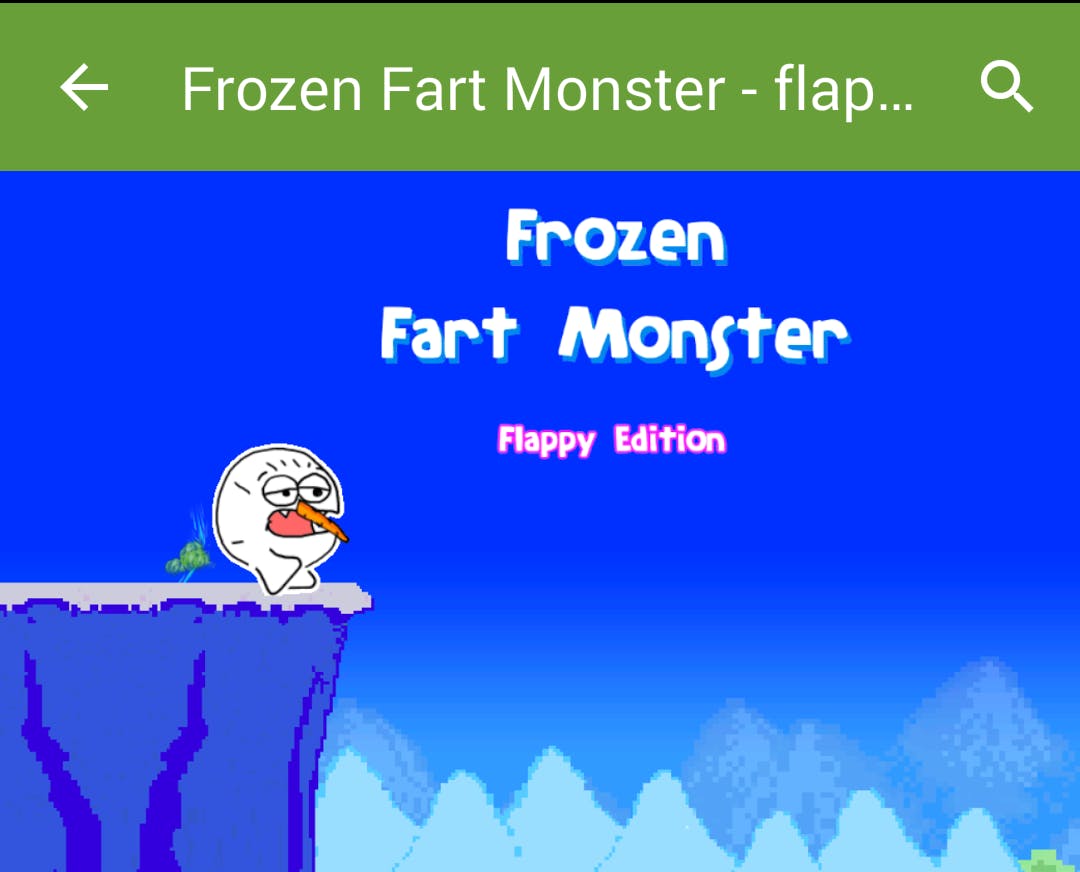 Difficulty: 5, if only because it’s next to impossible to play without accidentally clicking the ad-riddled interface.

What: These are just a few of an endless series of apps in which the user gives Elsa and Anna—or princesses styled to look a lot like them—fashion makeovers. In Ice Queen, the user helps Elsa get ready for her coronation day by giving her a beauty makeover. Blergh. 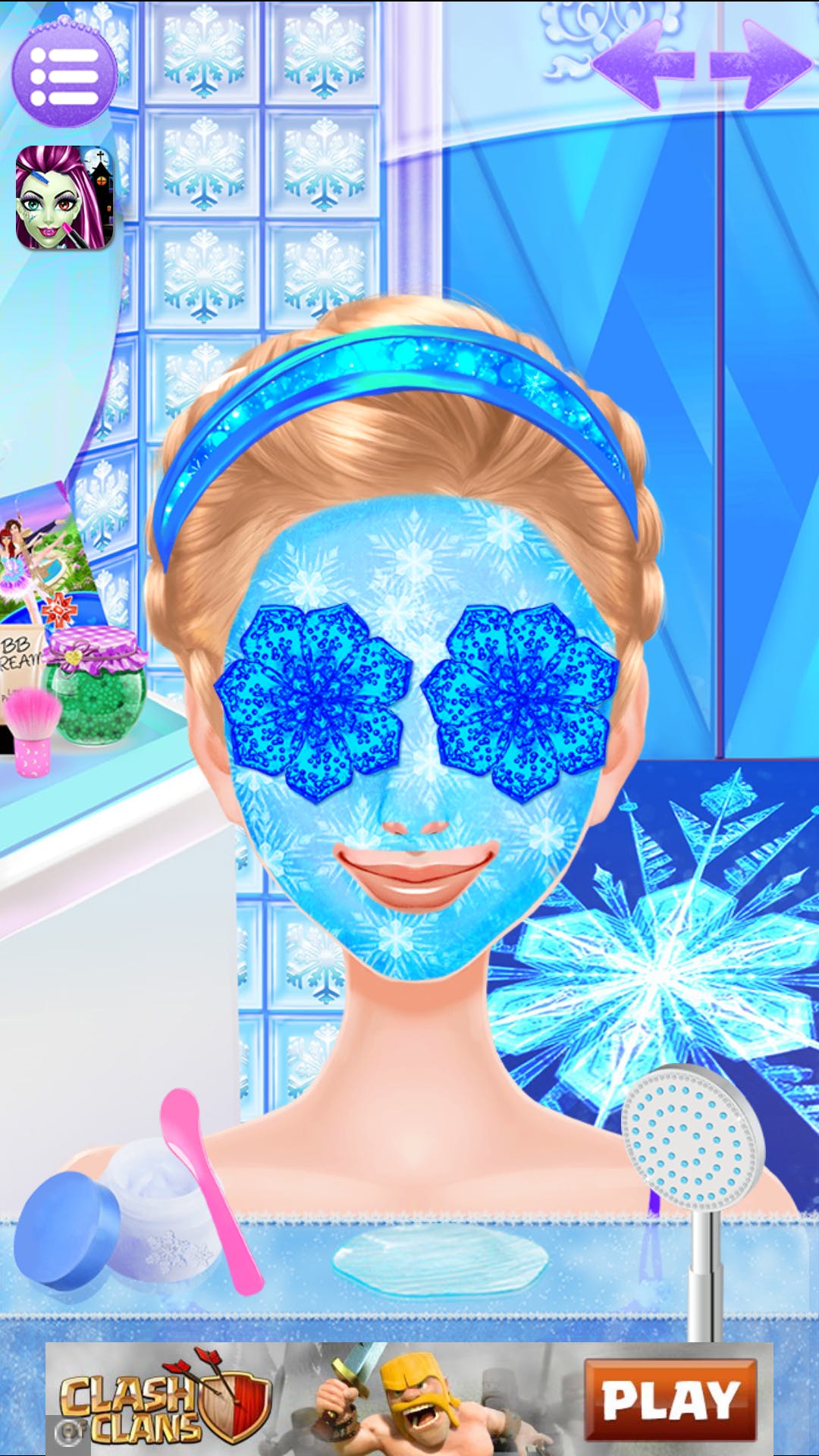 Weirdness: 4. Clearly designed for young girls, the assembly-line approach to getting Elsa ready for public display involves facials, tanning cream, concealer, and eye-brow tweezing while a Valley Girl voiceover informs you, “spa is super important!” and “so relaxing!”

Cuteness: 3. While the graphics are great, there’s nothing cute about watching Elsa’s pimples disappear beneath virtual concealer applied by cherubic 6-year-olds imbibing horrible messages about beauty. Frequent pop-up ads and occasional glitches also cut down the adorbs, though it should be noted that Frozen Ice Queen is a less-glitchy, more graphically advanced version with fewer ads.

Difficulty: 2, but glitches and a lack of clear instructions make this a 3.

What: With Frozen Dentist, our app journey through the Frozen wastes takes a bizarre turn. We’re now about to enter a surreal and disturbing arena of apps in which one or both of the main characters from Frozen are injured, or require some other form of medical care. In Frozen Dentist, the goal is simple: Repair Anna’s teeth. 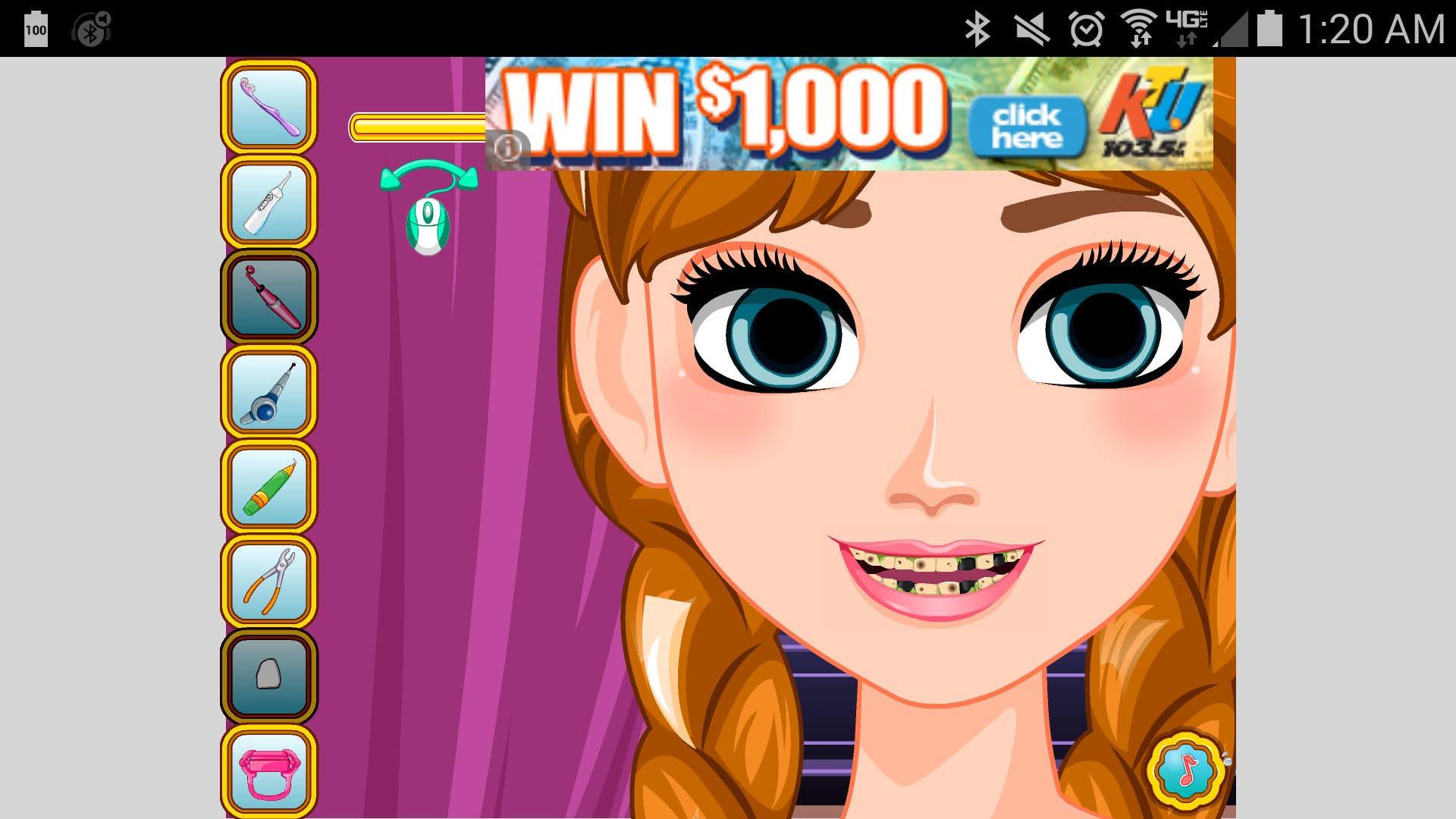 Weirdness: 4. Maybe this game is a good way to help calm the nerves of any terrified children in your life who are bound for oral surgery, but it’s really hard not to be weirded out by a garishly grinning cartoon Anna with holes in nearly all of her teeth.

Cuteness: 1. We will say the graphics are decent, and the user is able to restore Anna to her flawless-toothed self.

Difficulty: 2. The game play’s not intuitive, we were able to use instruments out of order, and it was hard to tell when we were done.

Fun: 0. We have no idea whether real kids play this game, but we uninstalled ASAP.

What: These are all games which involve a bizarre mix of doctoring and restoring an injured Anna or Elsa. These are almost always followed by giving her a fashion makeover, like the previously mentioned fashion apps.

Weirdness: 5. Of these games, undoubtedly the most bizarre is Frozen Brain Surgery, which walks you through the process of shaving Elsa’s head, getting her ready for surgery, and then opening up her brain. Once inside, you remove a rock, a princess tiara, the disembodied head of Olaf the Snowman, and a pair of sunglasses, all while soothing piano music plays. 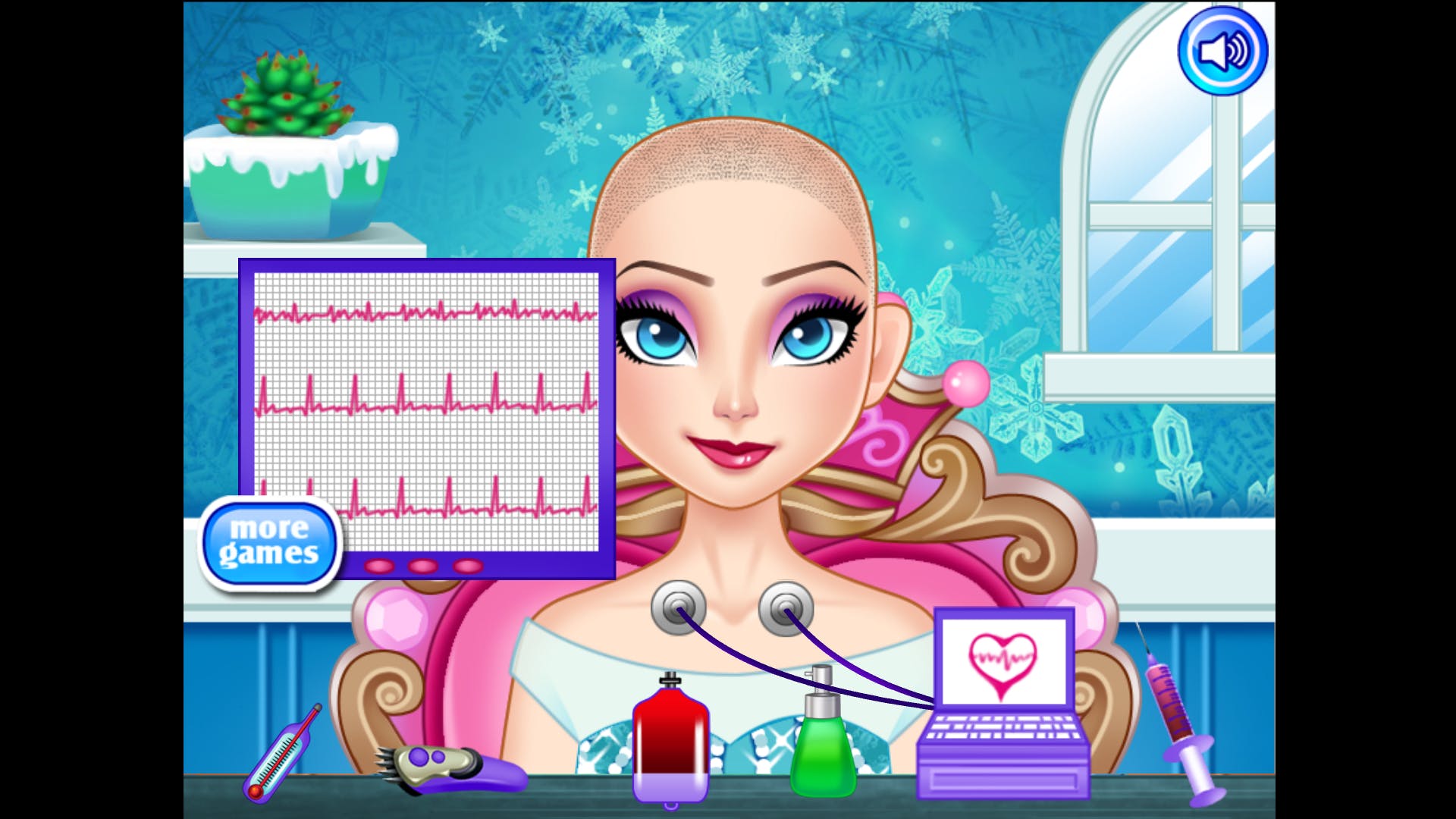 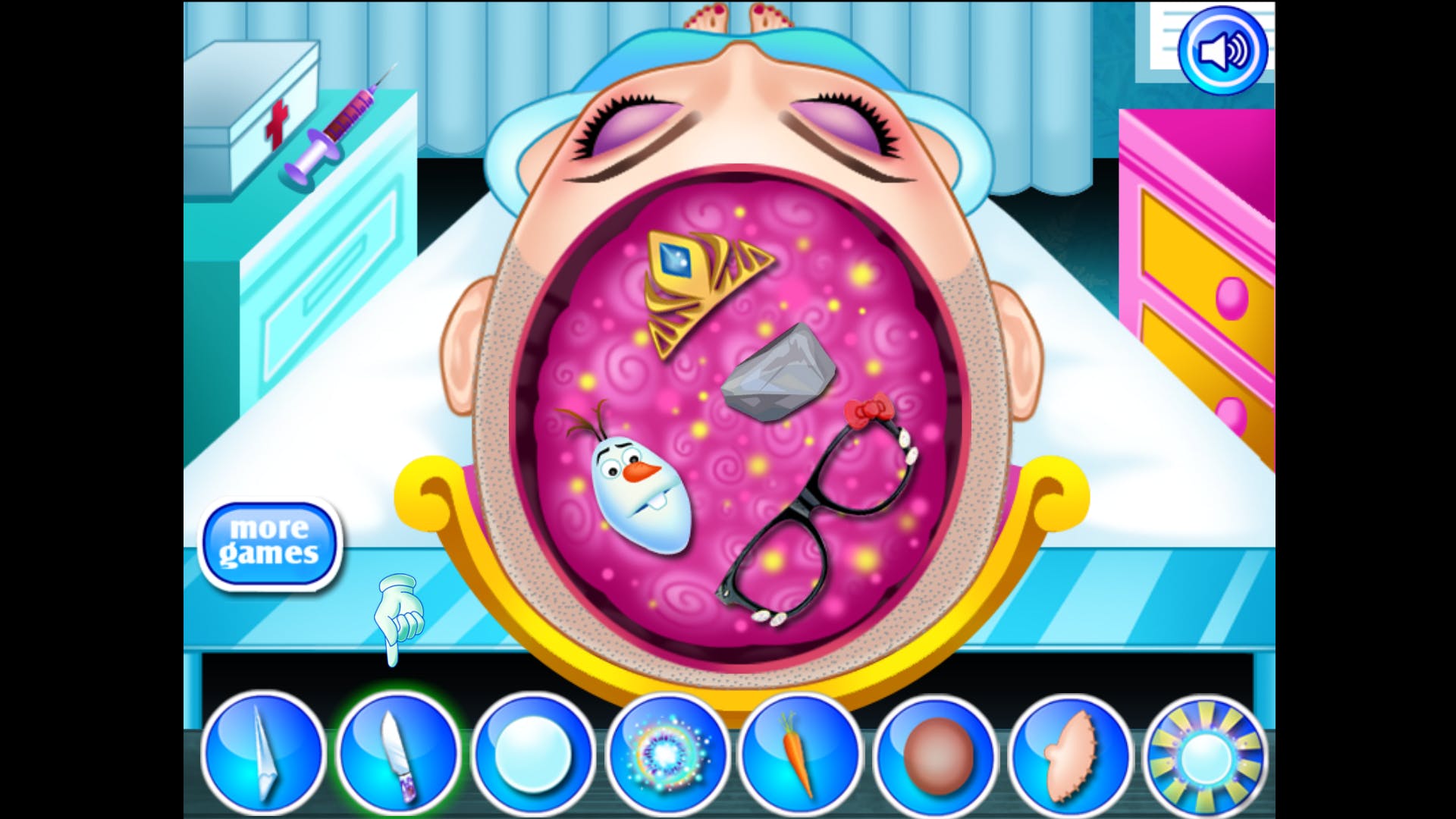 Cuteness: -1,000,000. Though some of these games, like Frozen Brain Surgery, have great graphics, the weirdness factor combined with details like sponges getting progressively more soaked with blood, or the splatter factor of brain matter getting everywhere as you remove an errant snowball from someone’s head, completely override the cute animation. Reviews for these games tend to be from horrified parents asking who on earth thought these were good ideas for kids. 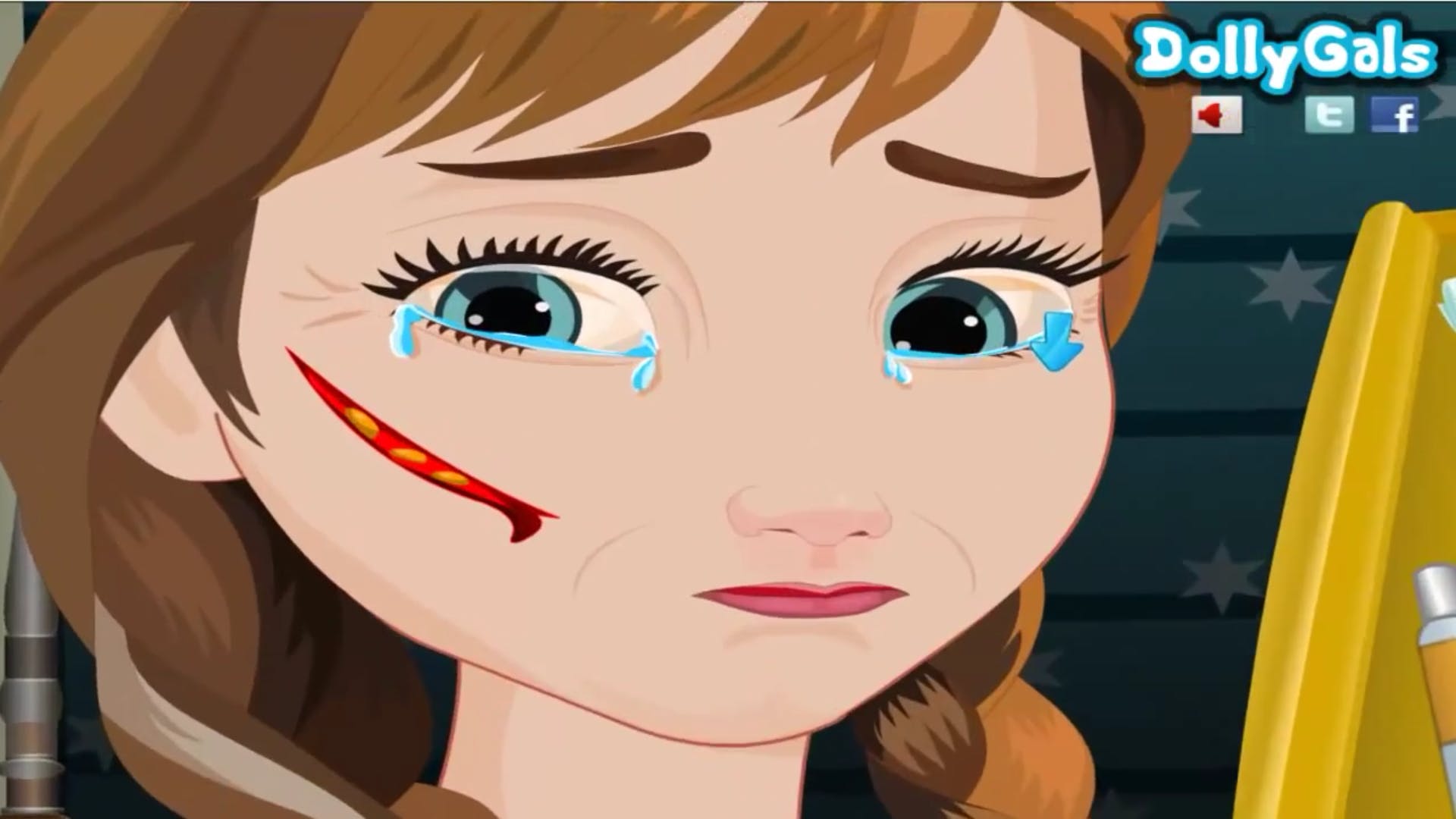 Difficulty: 4. Though most of these games are extremely simple they tend to be glitchy and non-intuitive. Frozen Brain Surgery, for example, is really hard to quit once you’ve got it open, and if the game glitches or you get stuck on a part, you basically have to start the whole process over. Other games, like Accident Treatment, are riddled with ads and glitchy plugins that make them nigh unusable.

Fun: 1. Weird can be good, but mostly these games are horrible. What: The first two of this trio of games involve the user helping mommy Elsa and mommy Anna prepare for and deliver a baby. This is as weird as it gets. After you’ve packed her baby bag, you’re taken to scenes of Anna or Elsa in the hospital bed. In each version, you help make the incision to give Anna or Elsa a Caesarean section and then uncover the baby. WTF. 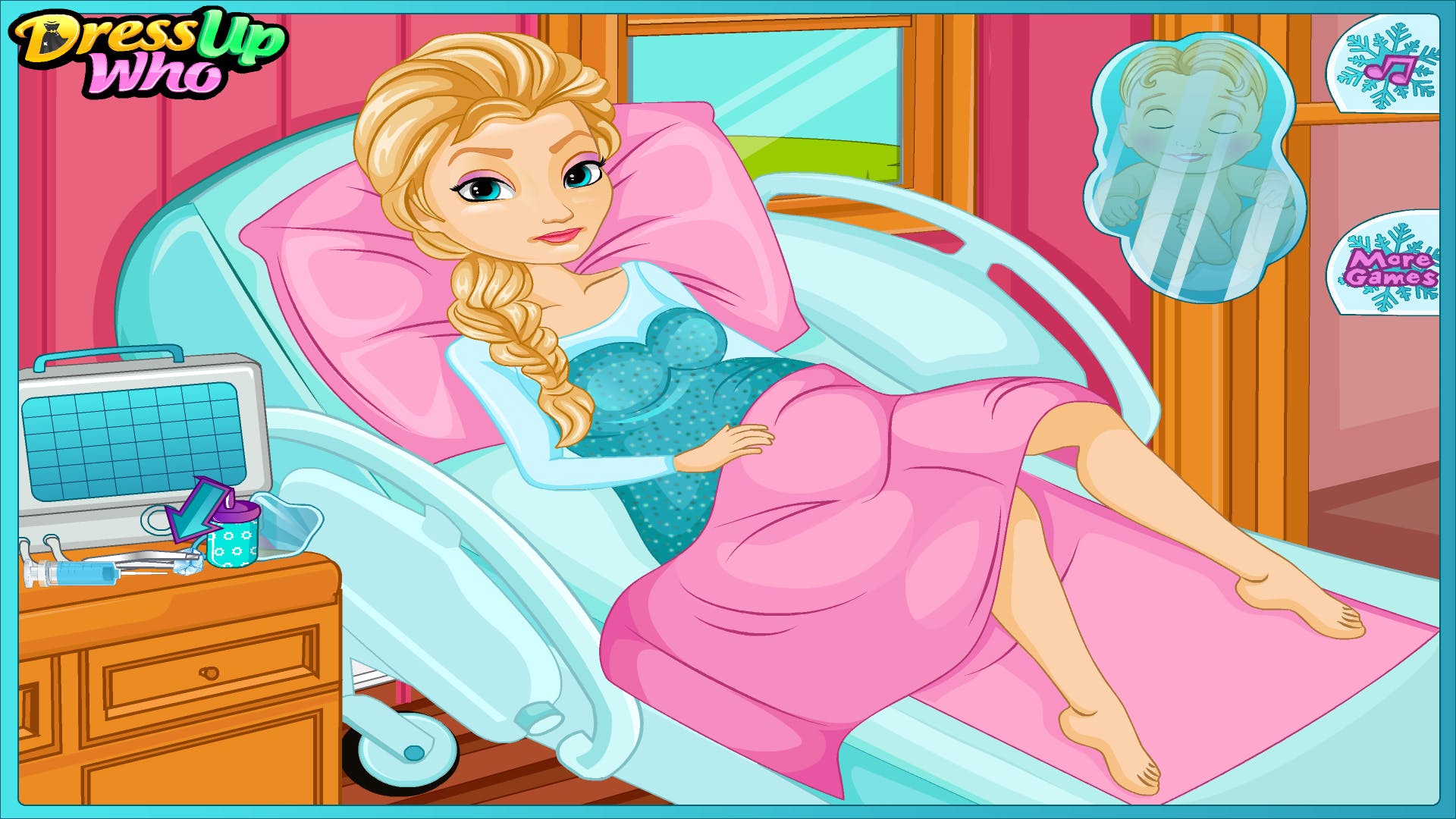 Baby Frozen Care, on the other hand, starts out creepy and just plain wrong and stays there. For starters, baby Anna and Elsa have adult heads (complete with makeup) stuck on the body of an infant. To make things even more bizarre, once the user has successfully changed baby Anna or baby Elsa’s diaper, they can give her a makeover, too, which involves fitting her with cute onesies, and, oh, yeah, swapping out her long, flowing hairstyle for other styles. You know, for the full head of womanly locks every baby owns.

Weirdness: 5,000,000. We can’t stress enough how weird these games are. The baby delivery apps start out banal, asking you to help pack the mother’s hospital overnight bag. But they quickly turn surreal with the next step, which involves cutting open the mother and then pulling the baby out one power-up at a time. And the less said about Baby Frozen Care, the better.

The Verdict: We kept a copy of Frozen Drawing Lessons, because it’s awesome. We also kept that crazy glitchy Anna jump finger game, because what the hell, it comes with a creepy omnipotent Santa Claus. And, OK, fine, sexism aside, we’ll be playing Ice Queen 2 a little longer, because, well, spa really is super important.