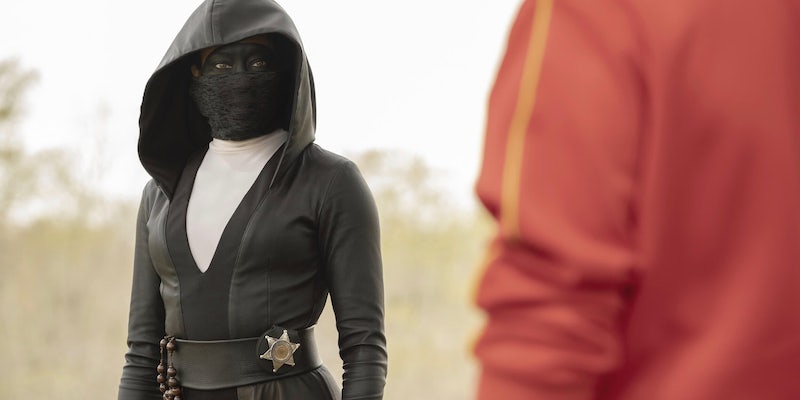 Attendees gave multiple members of the cast standing ovations after the episode screened.

Lindelof was on hand to introduce NYCC attendees to the series, which he described as “a very, very expensive bit of fanfic,” as he told his own Watchmen origin story: As a teenager, his father gave him the first two issues of the comic book series and told him, “You’re not ready for this.” He also acknowledged that Moore does not approve of his adaptation of Watchmen, and out of respect for Moore, Lindelof isn’t speaking his name.

But about halfway through the post-premiere panel, Gibbons was revealed to be the surprise guest and joined Lindelof, director Nicole Kassell, and the cast to discuss the pilot and series itself. In both being on the panel and praising Lindelof, Gibbons essentially showed signs of support for Lindelof’s series.

“What particularly attracted me was Damon wasn’t thinking of this as a prequel or a sequel, but an extrapolation,” Gibbons said. “What Alan and I did with Watchmen was ask, ‘if superheroes really existed, what would they be like?’ It’s a big and bold question. What Damon is answering here is, if what had happened, happened back in 1986, what would the world be like now? Thirty years is a lot of time for a lot of unexpected things to happen. You end up a million miles away from the graphic novel, but with extreme fidelity to it. There’s nothing in here that contradicts the graphic novel.”

The reception from fans was largely positive and included standing ovations for multiple cast members as they walked on stage for the panel. Over the course of an hour, the cast—which includes Regina King, Jeremy Irons, Jean Smart, Hong Chau, Louis Gossett Jr., Tim Blake Nelson, and Yahya Abdul-Mateen II—revealed how Lindelof approached them about the show (there were a lot of lunches) and their experience reading the comic. King discussed Lindelof’s personal plea, which included the script being sent to her and an illustration of Sister Night (the vigilante she plays) with King in the role; King also noted that she had never read anything like it. Fans were also treated to two exclusive scenes, featuring Smart as Laurie Blake (who won’t appear until the third episode) and Chau as trillionaire Lady Trieu.

Lindelof stressed that the 12 issues that made up Watchmen are canon, and he has no interest in changing anything that Moore and Gibbons created in the original comics. Noting that Watchmen had a beginning, middle, and end, he explained that for now, Watchmen is set to be a single-season story over nine episodes—with a potential for more if there’s interest.

“We want to see how it’s received by you guys,” he said. “If the show comes out there and the conversation surrounds the show suggests you’re hungry for more, we’ll certainly take that into consideration. We want to deliver nine episodes that deliver a complete and total, amazing story.”