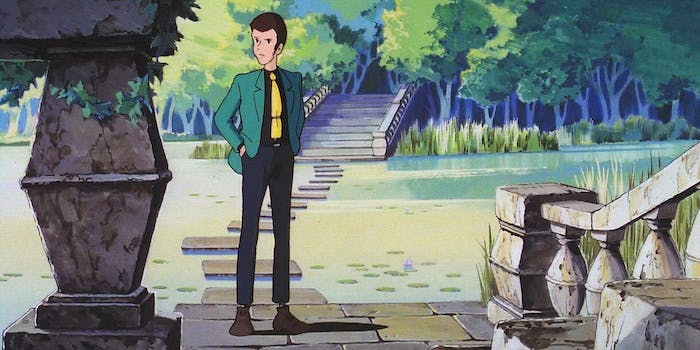 You can watch Hayao Miyazaki’s long-lost debut on Netflix

'The Castle of Cagliostro' is a long-lost classic.

Some Hayao Miyazaki movies are bizarrely difficult to stream online, so we were pleasantly surprised to notice his debut feature, The Castle of Cagliostro, is now on Netflix. This little-known movie paved the way for his career as the most celebrated anime director in the world.

Released in 1979, The Castle of Cagliostro is somewhat different from Miyazaki’s more famous works at Studio Ghibli. While he went on to make other adaptations like Howl’s Moving Castle, Cagliostro is actually part of a wider franchise. It belongs to the anime/manga series about Lupin III, a master thief inspired by the early 20th century literary character Arsène Lupin. His adventures fall somewhere between Sherlock Holmes and comedy heist capers, with The Castle of Cagliostro following Lupin as he tracks down the origin of some counterfeit money. (Money that he stole, naturally.)

Miyazaki directed and co-wrote Cagliostro, so this is very much his vision. It’s a more straightforward comedy adventure story than the more fantastical tone of his later work, but his distinctive style was already taking shape. Even in the trailer above, you can see Miyazaki’s effective use of landscape and architecture.

Miyazaki worked as a TV animater and director throughout the 1970s, including the Lupin III TV series. Cagliostro was his big break, and five years later he released his second feature film, Nausicaä of the Valley of the Wind. Taking place in a post-apocalyptic future, it launched Miyazaki’s lifelong habit of making politically insightful fantasy stories with female leads. And while it’s much better known than Cagliostro, it’s frustratingly unavailable on U.S. streaming services. However, you shouldn’t dismiss The Castle of Cagliostro as just the training period before Miyazaki’s work at Studio Ghibli. It’s critically acclaimed in its own right, and is well worth checking out on Netflix.

You can find The Castle of Cagliostro here on Netflix. It’s dubbed into English, without the option for Japanese audio with English subtitles—but that isn’t an unusual issue for international distribution.