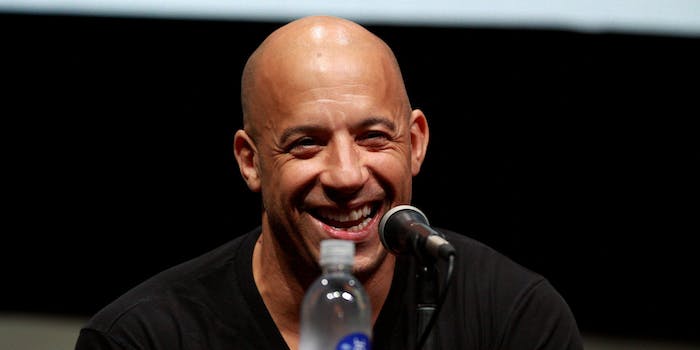 There’s fanboy cred, and then there’s Vin Diesel. Apparently not content with recording Groot’s Guardians of the Galaxy dialogue in multiple languages and showing up to the premiere on stilts and wearing an “I Am Groot” shirt, he’s now teasing the possibility of another Marvel role.

Diesel is a longtime Marvel fan and has spent years teasing his fanbase about all the meetings he’s supposedly had with the studio. The latest hint comes in the form of a Facebook post, with Diesel writing, “I get the strange feeling that Marvel feels I’m Inhuman.”

This post wouldn’t seem like a big deal, save for the capital I. The extremely simplified explanation is that the Inhumans are a superpowered race from Marvel comics, long rumored to be joining the Marvel Cinematic Universe.

Now would be a great time to include them, partly because Marvel Studios doesn’t own the rights to any X-Men characters or storylines. Instead, they could cannibalize the concept of Inhumans to explain superpowered characters like Quicksilver without using the word “mutant.” Or some of the “real” Inhumans could just show up in a more direct adaptation. The Inhumans are a little more offbeat than the Avengers, but Marvel has already proven with GotG that it’s not afraid of making movies about weird characters.

It’s not totally out of the question for Vin Diesel to come back for a second Marvel role. He wound up playing Groot mostly because both he and the studio wanted him in a Marvel movie, but he was too busy for anything other than voice work at the time. However, an Inhumans adaptation could mean a new franchise, which Diesel would be able to schedule several years in advance.

Or, of course, he could just be trolling everyone, safe in the knowledge that any mention of Inhumans is enough to shake Marvel fans into a tizzy. That’s also a very plausible explanation.