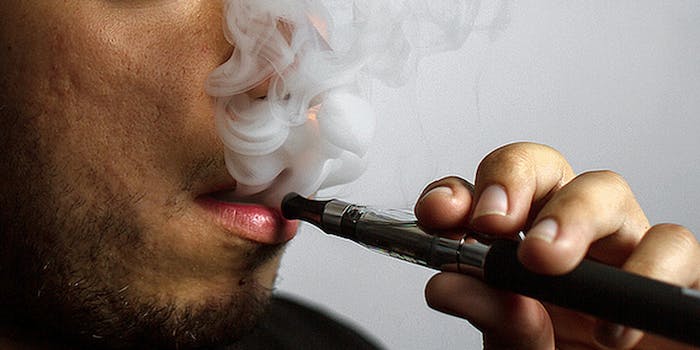 ‘Vape’ is your Oxford Dictionaries Word of 2014

But it's been around longer than you think.

It’s been a big year for marijuana, with victories at the polls and arrest rates plummeting, but a subculture that brings together potheads and cigarette smokers has also flourished: vape life.

Yes, those pocket-sized electronic devices that heat your tobaccy, wacky or otherwise, to produce an inhalable vapor low in toxins but high in active ingredients, have exploded in variety and ubiquity of late. Which explains why they beat out the slang juggernaut “bae” as the Oxford Dictionaries Word of the Year. (Also on the shortlist were “normcore,” “indyref,” “contactless,” “budtender,” and “slacktivism,” none of which really stood a chance.)

Sometimes I get bored and blow vape smoke in my drink pic.twitter.com/JFXpkMIvBb

From the official ruling on the word:

Its linguistic productivity is evident in the development of a vaping lexicon. Vape pen and vape shop appear most frequently, with related coinages including e-juice (the liquid that is converted to vapour in the process of vaping an e-cigarette), carto (short for cartomizer, a disposable cartridge in which e-juice is converted into vapor), vaporium (a place where e-cigarettes may be vaped or in which vaping equipment can be purchased), and even the retronym tobacco cigarette which serves to distinguish traditional cigarettes from the electronic devices.

In a stunning reveal, it appears that “vape,” at least in its adjectival form, first entered the lexicon in the early 1980s. The Oxford Dictionary researchers quote a 1983 article titled “Why do People Smoke,” written by Rob Stepney and published in New Society, which describes the curious gadget that would come to be widely used and recognized in 30 years: “an inhaler or ‘non-combustible’ cigarette, looking much like the real thing, but … delivering a metered dose of nicotine vapour. (The new habit, if it catches on, would be known as vaping.)”

There you have it, vapers—now vape on, vapily, into that vaporous night. You’ve earned it.