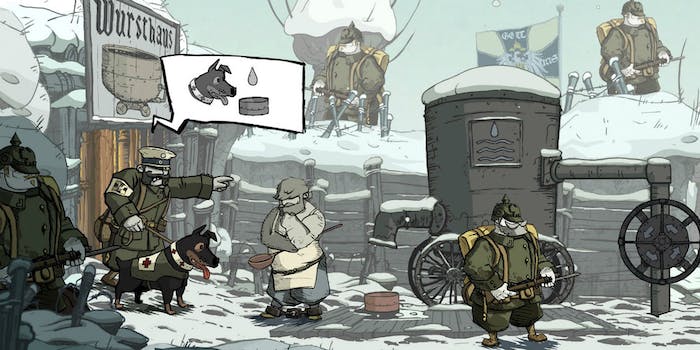 The design may be cartoonish, but the themes are all too real

Valiant Hearts: The Great War is a cute, charming puzzle game set against the trauma of one of the most brutal, horrific wars fought by humankind. If that sentence gives you the cognitive dissonance it ought to, you’re on your way to understanding why Valiant Hearts belongs on your short list of games to play in 2014.

For the player who just wants a challenge, Valiant Hearts offers puzzles that should take all but the most experienced adventure or puzzle game players a respectable amount of time to figure out. There are also more traditional, kinesthetic challenges and stealth levels, which lack the depth of traditional fare but are not throwaway activities.

For the player who also wants the challenge of being confronted with new ideas and uncomfortable emotions, Valiant Hearts offers lessons about World War I that range from the merely interesting to the truly disturbing.

Serious games—which should first and foremost be games, not just the cheap gamification of educational materials—are games designed not only to entertain, but also to improve the lives of their players. Serious games can operate like a Trojan Horse, offering the player an activity that feels like “just a game,” but that has deeper levels of meaning that may or may not be overtly referenced. 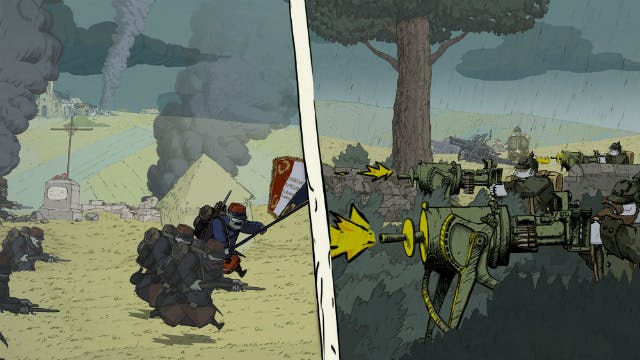 Valiant Hearts operates as both an entertainment game and a serious game. It was developed by Ubisoft Montpellier, the studio behind ZombiU (a game that belongs as squarely in the entertainment category as a game can), in cooperation with the makers of Apocalypse: World War I, a French documentary series broadcast on French and Canadian television earlier this year.

Ubisoft Montpellier and CC&C, the producers of Apocalypse: World War I have deftly collaborated on Valiant Hearts to make sure both sides of the game, the entertainment and the serious, manage to not step on each other while also not surrendering the strength of either’s presence. The game exists in the metaphorical no man’s land between the trenches that define the limitations of either approach to game development.

Be Glad The Puzzles Have Hints

Valiant Hearts is the story of a German man named Karl, who is living in France when all German nationals are expelled from the country prior to the beginning of World War I. Karl leaves behind a wife and child, and a stepfather named Emile who is drafted soon after into the French military.

Emile is joined by Freddie, an American volunteer serving in the French army, and a Belgian veterinary student turned nurse named Anna, in pursuit of German officer Baron von Dorf across the war’s western front.

Freddie wants revenge for the death of his wife on their wedding day, at the hands of von Dorf’s German battalion. Anna wants to rescue her father, a brilliant scientist kidnapped by Karl under orders from von Dorf. Anna’s father is being forced to design weapons for the German war machine. Emile fights to defend France from the German invaders, while also hoping his son-in-law Karl can remain safe.

Emile, Freddie, and Anna are assisted by a German medical dog named Walt. Emile rescues Walt after they both survive an Allied attack on a POW camp in which Emile had been held captive. 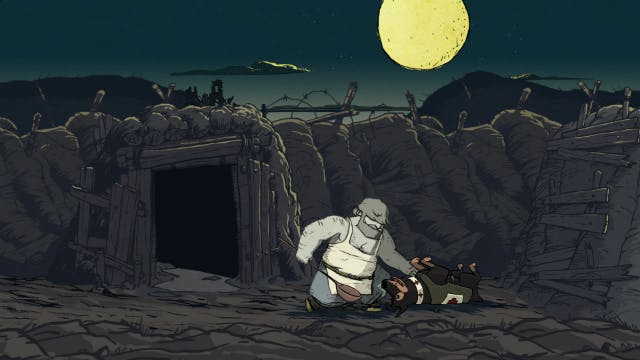 The puzzles in Valiant Hearts mostly involve simple physics and figuring out a logical succession of steps. They sometimes involve switching between characters to take advantage of their unique abilities. Walt can squeeze into tight spaces to retrieve objects, for example.

In one puzzle, Emile needs to load shells into a French cannon. The solution is to find a stick, throw the stick at a tree branch at just the right trajectory to dislodge a knife from the branches, and switch to Walt to retrieve the knife. Once Emile has the knife he can use it as a lever to operate a pulley mechanism and lift a crate of shells out of a supply trench. The next puzzle is to figure out how to get the shells into the cannon.

Messenger pigeons arrive with hints throughout each level. You can open the envelopes they deliver to get pictorial clues as to where to go, or what to do. The help notes arrive on a timer. If you need a hint you can always see when the next message is due to arrive. This acts as a nice counterbalance to some of the more challenging puzzles.

If you get frustrated and see that another hint is due to arrive in two minutes, that might be enough encouragement to try just a little harder for that two minutes. And maybe knowing help is on the way will lift the pressure enough to let you deduce the solution on your own.

Valiant Hearts makes clever use of comic book-style panels. There are several segments in which our heroes have to sneak across a trench, under cover of night and the watchful eyes of German machine gun operators. You can see the machine gun positions in the distance, and a close-up of the gun position might appear in a comic panel in the corner of the screen. If you watch the comic panel for the gunner to doze off, that’s when you know it’s safe to sneak between sandbags.

These stealth sequences are unforgiving. So are the sequences where you are driving a car or running across a field dodging bombs or mortal shells. Boss fights, like trying to bounce sticks of dynamite off walls and slide them down collapsed girders into the open turret of a German tank, can also leave little room for error. 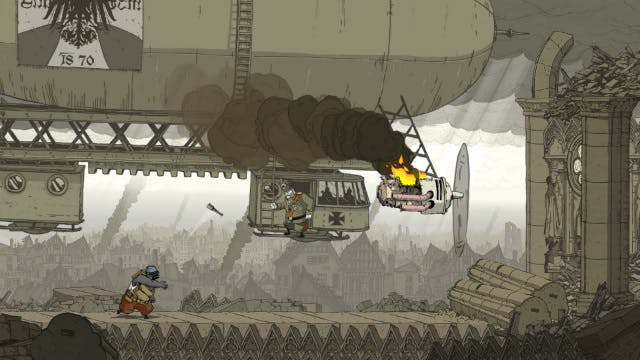 “Charming” is not a word I use often to describe a video game. It’s impossible not to feel charmed, however, when characters in Valiant Hearts indicate what they need or what they want in the course of a puzzle with a little cartoon word bubble over their heads. When characters speak it’s rushed and muted, and that’s cute because the information is conveyed pictorially, anyway.

The reliance on image to convey information is another example, like generous shortcuts and the hint system, of how Valiant Hearts manages to be challenging, yet accessible.

Some of the educational content in Valiant Hearts is woven into the introductory sequences between chapters, via voiceovers and maps that show the progress of the war. Some of the content is built into the levels themselves.

For example, one of the aforementioned car-driving sequences has Anna, the Belgian nurse, driving a taxicab, with French soldiers on the running boards, up to the front lines outside Paris.

The sequence is wonderfully-choreographed to can-can music, “Infernal Gallop” by Offenbach to be precise, while Anna dodges between slower cars, and barrels dropped from supply trucks.

Part of the sequence, in which Anna has to squeeze between two other cars weaving back and forth across the road, is set to “Belle nuit, ô nuit d’amour,” also by Offenbach. The music selections in Valiant Hearts are across-the-board brilliant, and this particular section of the game is a highlight.

Taxicabs driving French soldiers to the front outside Paris is a real event that took place on Sept. 6 and 7, 1914. The German army had marched to within 20 miles of Paris, and the French army moved to engage them at the Battle of the Marne. The French victory at this battle is what saved Paris from German occupation.

Prior to this driving sequence, Anna has to solve a series of puzzles to repair the taxicab. It is during this portion of the game, as well as other, “main” levels like this, that the player can pause and dive into a menu of supplementary, historical material.

Historical facts are almost always accompanied by real photographs from World War I. Collectible objects—which give Valiant Hearts some long-term replay value for completionist players who miss collectibles the first time through the game—are always historical objects that can be examined for additional information. 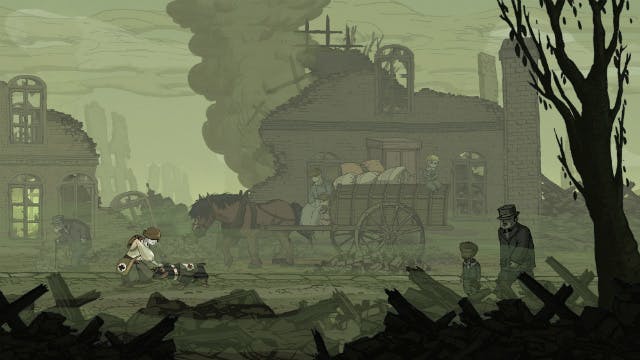 There’s a level in which Emile has to help disarm poison gas canisters, to allow French troops to proceed. This is accompanied by historical facts about chlorine gas being used in the war for the first time at Ypres on April 22, 1915. When Karl has to escape a French prison camp, the historical notes detail what life was like for captured soldiers in World War I.

This historical appeal is seamlessly woven into the “game-y” portions of Valiant Hearts that the entertainment and serious aspects of the game are inseparable from one another. Player can decide the level of history they feel like delving into at any given moment.

The art in Valiant Hearts is crisp and vibrant, and the animation is buttery smooth. The musical score, from the title screen to the mid-chapter sequences to the levels themselves, is beautifully married to the art and action.

The effort that went into the production of Valiant Hearts may explain why it’s also heartbreaking if you’re willing to engage beyond the puzzles on the surface. Valiant Hearts does not pull punches. It’s surprisingly violent at times. Emile carries a French regimental flag across a field while his comrades are mowed down by German machine gun fire. The action is conducted facing away from the camera such that you can’t see the details, but Anna amputates the arm of a wounded French soldier. One of the supplemental materials on facial disfigurement is accompanied by a photo of a war veteran with a horrible injury.

After a fashion, the care and spirit that went into its development might be responsible for how much more effectively Valiant Hearts conveys the tragedy of war than any of the military shooter games that market themselves on the valiant heroes at the center of their campaigns. Not only does Valiant Hearts question whether a line needs to be drawn between games for entertainment and games for education, it also questions whether the video game industry needs to rethink how it addresses war if games are to be taken as serious examinations of the theme.

You may find the title music serene if not melancholic when you first load up Valiant Hearts. When you return weeks later to replay favorite sequences and find collectibles you missed, you may find the same music moving for the way it tugs at the heart strings. You will know, as you’re returning to the game, the music is a reminder of the tragedy and the beauty that lies underneath the cartoonish art and puzzles of Valiant Hearts.

All images via Ubisoft