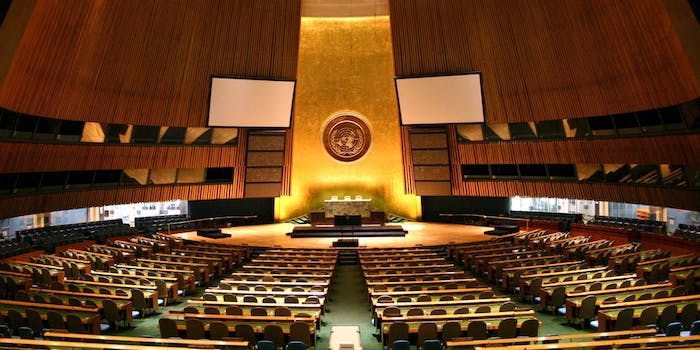 The United Nations reveals plan to sponsor a superhero franchise

In one of the strangest announcements to come out of this year’s New York Comic Con, the United Nations has revealed plans to sponsor a superhero franchise.

The news broke at the panel for T.H.U.N.D.E.R. Agents, a 50-year-old superhero team comic currently published by IDW. Like many long-running superhero titles, it is about to be revamped into a multimedia “universe” spanning comics, TV, and movies. However, this announcement took an unexpected turn when the panel introduced a video message from U.N. Secretary-General Ban Ki-moon.

According to Comic Book Resources, the Secretary-General compared the power of the T.H.U.N.D.E.R. team to the diplomatic might of the U.N., heralding one of the most bizarre superhero crossovers we’ve seen in a long time.

T.H.U.N.D.E.R. is canonically linked to the U.N., much like how the Avengers and Justice League unofficially provide aid to world governments in Marvel and DC Comics. Still, this new franchise creates a far more direct partnership than we’ve seen with previous behind-the-scenes collaborations between Hollywood filmmakers and, say, the CIA. Led by father/son team Michael and David Uslan, the ambitious new T.H.U.N.D.E.R. franchise will be funded by a Chinese company named Huayi Brothers Media Corporation.

Michael Uslan described T.H.U.N.D.E.R. as melding the fun of Marvel with the darkness of DC, and said the new movie/TV universe was aiming for an “Avengers meets Bourne” kind of tone. Neither of these descriptions scream “United Nations sponsorship” to us, but we’re certainly interested to hear what happens next.