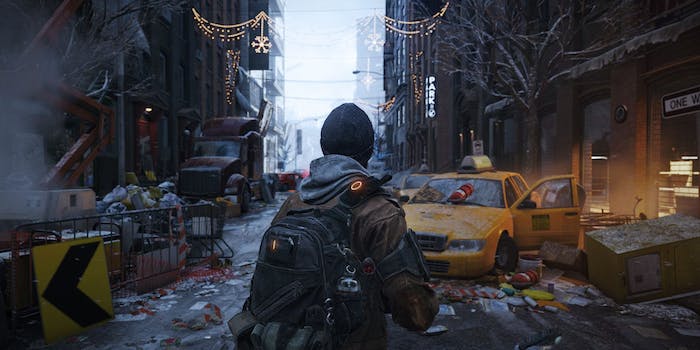 Updates on classic franchises and the usual press briefing kookiness.

Ubisoft’s E3 press briefings for the past three years have had two things in common. First, they feel a bit kooky. Second, they’ve been hosted by Aisha Tyler, who adds to the kookiness with ad-libs and off-script antics.

It didn’t take long for Ubisoft to get into this year, with its demonstration of Just Dance 2015, another entry in the choreography challenge game series. Ubisoft Paris’s Jason Altman then upped the ante with Just Dance Now, which uses a smartphone as the motion device. Players can supposedly log in from anywhere to play.

Of course Altman invited the audience to play along as a gaggle of professional dancers crowded onto the stage. Suddenly a dozen or more people started dancing in the audience.

The second round of playful-but-odd antics were presented by Charles Huteau, a creative director at Ubisoft Montreal, as he promoted Shape Up, another motion-based game. Shape Up is supposed to make exercise fun. First Huteau competed against himself in a step exercise game that looked something like step aerobics meets Rock Band.

Then two Ubisoft employees competed in a pushup contest. The exercises were paired with what video of the exercisers projected into colorful cartoon worlds.

But outside of dancing and interactive exercise, the bulk of Ubisoft’s press briefing presented core games. The Far Cry 4 trailer opened the event. These scenes take place at the base of the Himalayan mountains, and introduce the new villain named Pagan Min.

To paraphrase Dan Hay, executive producer of Far Cry 4, Ubisoft will give you a little bit of cash, a gun, and then you’re screwed. We’re using nicer language, than Hay did, by the way.

Tom Clancy’s The Division has been one of Ubisoft’s most anticipated titles since it was announced at the company’s E3 press conference last year. This year, the press briefing audience was treated to a taste of gameplay footage, which showcased the four-player co-op that’s been defining Ubisoft’s Tom Clancy games for a while now.

A gameplay demo for The Division was shown at Microsoft’s press conference earlier in the day, but Ubisoft gave the audience a cinematic trailer. Be warned, if you’re a sensitive type. The opening voiceover about a family dying from a plague is a little disturbing.

Creative director Julian Gerighty introduced The Crew, an open-world racing game that promises to let players drive from Miami to Los Angeles without any load times. Apparently players are already forming crews and competing with one another, with a Twitch tournament for Drive Club being held on June 10 and 11.

The closed beta for Drive Club opens on July 23, and the game will be released on Nov. 11 for PlayStation 4, Xbox One, and PC.

Ubisoft has yet another game in the Assassin’s Creed franchise in the works. Assassin’s Creed Unity got a brief demo at Microsoft’s press conference through a short 4-player co-op assassination mission. Ubisoft obviously saved the meat of their Assassin’s Creed material for their own press briefing.

Ubisoft showed a new cinematic trailer for the game, which takes place in revolutionary France, set against a very surreal cover of Tears for Fears’ “Everybody Wants To Rule The World.”

Next, Ubisoft showed a single-player mission from Assassin’s Creed Unity, which takes place during the Reign of Terror in Paris in 1793. The number of people in the crowd at the beginning of the footage is impressive. This could very well be footage from the PC version of the game, but in any case we’re beginning to see games that are clearly meant for next-generation hardware.

Ubisoft broke up the heavy, core-gamer footage with a heavy, cartoonish game called Valiant Hearts: The Great War, which will be released June 25. The game is being created in partnership with a documentary titled Apocalypse: World War I, and is inspired by letters sent during the war.

Ubisoft wrapped up their E3 2014 press briefing with a surprise. Rainbow Six: Siege is the first game in the franchise since Rainbow Six: Vegas 2 in 2008. The franchise has never been as punishingly tactical as the original Rainbow Six in 1998, which was mostly about planning your breach and clear of a building. One gunshot resulted in instant death.

Still, the cops vs. criminals Rainbow Six: Siege gameplay demo which capped off Ubisoft’s press briefing was clearly meant to invoke memories of the original game. In a scripted dialogue sequence, we hear and see a team of five players planning their route into a home in suburban Boston to rescue a hostage.

The most interesting thing about the gameplay demo, which Ubisoft couched as pre-alpha footage, is the amount of environmental destruction. The walls seem paper thin, and there’s a breach through the ceiling of a room where the hostage is being held. Rainbow Six: Siege will be released sometime in 2015.

Screenshot via The Division | Photo via Ubisoft