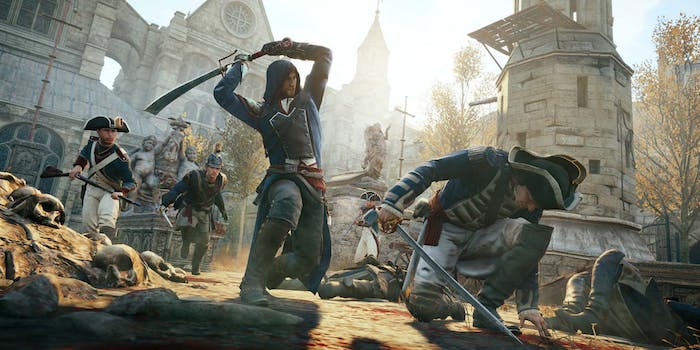 Glitches and controversy have marred the company's latest launch.

When a video game publisher is compared to Electronic Arts, which was named worst company in America two years in a row by Consumerist, you know it’s having a rough time.

Ubisoft came under fire this week for a number of issues, including tactics to delay review scores for Assassin’s Creed: Unity, the use of microtransactions in the game, and the game’s overall rough quality. This is a stunning reversal in public perception for a company that was regarded as “winning” the Electronic Entertainment Expo in 2012.

The backlash started Tuesday when several prominent gaming sites took Ubisoft to task for setting the embargo on reviews of the game at noon EST—12 hours after the game was available for purchase. (An embargo limits when a media outlet can publish information, or in this case a game review, in exchange for getting a preview of the game or information ahead of time.) This sort of post-release review embargo is extremely uncommon, and the revelation of the noon embargo time set off a flurry of discussion at popular gaming sites like Kotaku and Polygon. Both sites argued that the late embargo was anti-consumer, and they’re responding accordingly.

Hardcore gamers have a reputation for being cantankerous as hell. Once you give them an opening, they start piling on. Ubisoft is now additionally catching flak for offering real money microtransactions in Assassin’s Creed: Unity, through which players can buy their way past traditional leveling systems, or purchase in-game currency. Notice that no one is giving BioWare any trouble for including microtransactions in Dragon Age: Inquisition, however. That may change after Inquisition is released, but gamers’ ire can be selective.

Unity didn’t get bad review scores from critics, on average, but fans are panning it. Gamers have a penchant for drama when it comes to games they don’t like, and once they smell blood in the water, perception of the company in question can play into feelings about an individual game as much as the quality of the game does.

PC gamers specifically are having a lot of trouble with Unity, reflected by one of the most popular, PC-centric YouTubers deciding to pull the plug entirely on covering the game, for now. Those issues with the PC version have been acknowledged by Ubisoft, and the company is working on fixes.

It’s always bad for a publisher when their perception within video game culture takes a nosedive, but while gamers’ anger runs hot, it usually doesn’t spill off the Web and into meatspace. What does affect the real world for a triple-A game publisher, however, is critical reception of their latest title. The launch for Unity was poor enough that Ubisoft’s stock price took a reported 9 percent drop in European indexes on Wednesday.

If Far Cry 4, the next installment in Ubisoft’s popular open-world, first-person shooter franchise, which is released for PC, PlayStation 3, PlayStation 4, Xbox 360, and Xbox One, on Nov. 18, is a critical success, that could turn things around for Ubisoft quickly. Everything taking place right now just goes to show how high stakes the triple-A video game industry really is, which is partially why so many developers are getting out of the traditional games and going indie, instead.