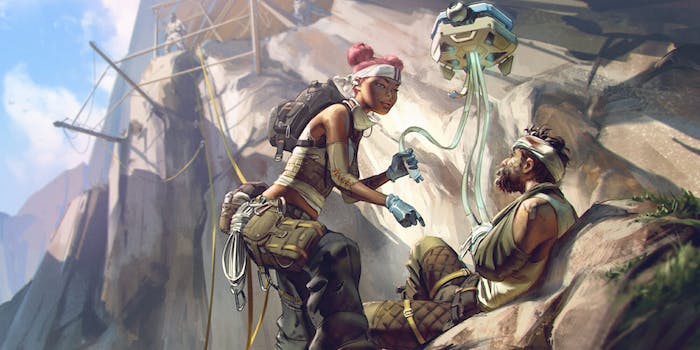 Careful, parents. If your kid plays too much Apex Legends, he may turn into a girl. At least, that’s what one Xbox user’s review apparently claims, supposedly from a parent who believes the game “is turning my son transexual [sic].”

Tuesday evening, Instagram model and influencer Kiyoshi Kidd turned to r/apexlegends and shared a screengrab from an Xbox user on the Microsoft Store under the account name “ItzHalo.” In that review, ItzHalo laments Apex Legends’ ability to, apparently, make players transition genders.

“My son has been playing this game recently there is only one problem he keeps using the female characters,” ItzHalo writes, giving Apex Legends a one-star review. “I think this game is turning my son transexual [sic]. I am not the only one that thinks this every one in my Facebook group is having the same problem in this game and others.”

The original Reddit post has since earned over 1,500 points, later making its way onto Twitter throughout the day. Since then, trans meme account @hotcistakes shared Kidd’s screengrab and added a dunk of its own, scoring over 4,000 likes.

In an interview with the Daily Dot, Kidd stressed that the post “is a real review I saw on the Xbox store reviews.”

“I initially made the post because I truly thought this reviewer was out of their mind and wanted to share it with others,” Kidd told the Daily Dot over Reddit chat. “I know there was a bit of ‘controversy’ around Gibraltar being gay and Bloodhound being nonbinary so I figured I would see a few reviews reflecting that.”

The Daily Dot reached out to @hotcistakes for their perspective on the post.

So I made the mistake of browsing the one star reviews for @PlayApex on the @Xbox store….

Once the post made its way onto Twitter, it didn’t take long for the dunks to commence.

Is Apex Legends now going to be included along with the free 30 days of FFXIV when going to the clinic for HRT?

Fun fact: if you play as a character in a video game, you become that character for real.

I used to be a human just like you, but then I started playing Skyrim as a dark elf…

Assassin’s Creed Oddysey made me trans and bisexual then https://t.co/hCa87O0Au3

Bologna. It was the potion at the bottom of the castle in Fable 2 that turned me transsexual.

And yes, there’s even a dril tweet that predicted this one. Dril’s Law in action, baby.

If that wasn’t enough, apparently Apex Legends will also email your parents and tell them you’re gay. That’s the cold, hard truth, according to one satire website. It’s a banner day for diversity in the gaming industry.

As for the review’s existence, it’s hard to know for certain whether an actual parent is behind the post—or if it’s real. Searching through Apex Legends’ one-star reviews from Feb. 10 on the Microsoft Store shows zero posts from “ItzHalo.” Furthermore, no results appeared for a gamertag named “ItzHalo” when this reporter searched for the account through Xbox’s gamertag search.

“I can’t say that I’m a fan of seeing reviews like that,” Kidd told the Daily Dot. “I didn’t realize they actually took action that quickly.”

To clarify on the matter, the Daily Dot reached out to Xbox for more information.

Real or not, the review touches on an ongoing discussion around Apex Legends: The game is incredibly diverse, even more-so than other games with inclusive character rosters, such as Blizzard Entertainment’s first-person shooter Overwatch. Apex Legends currently features eight legends to choose from, and among those eight, three are people of color, three are women, and one, Bloodhound, is nonbinary. One hero in particular, Gibraltar, is both a person of color and a queer man. The only two white men in the game, Mirage and Caustic, are locked to start and must be unlocked through in-game currency.

In other words, most experienced players wind up playing as either a female or nonbinary character multiple times in Apex Legends, if not regularly. Either the review in question is riffing on that point, or it comes from a parent who can’t stomach a diverse game with diverse characters.

“i can see no reason why a teenage boy would be interested in female characters,” Twitter user @BasedTomas quipped, making fun of the review. “he must be trans.”