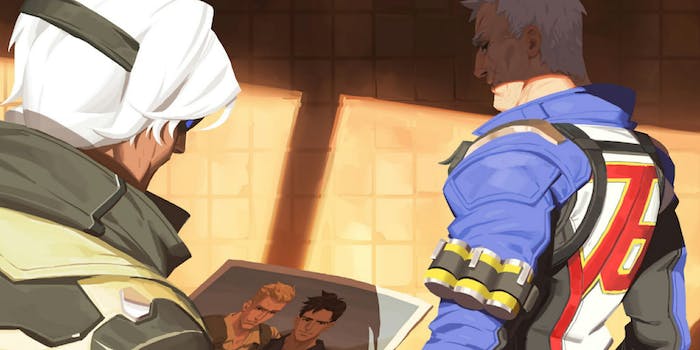 For the second time in nearly three years, Blizzard’s multiplayer first-person shooter Overwatch has a queer character. This time around, he’s Soldier: 76, the hardened ex-commander of the game’s Overwatch task force. Some cherish Soldier: 76’s inclusion as a gay man, but others see him as too little and too late for a franchise increasingly at the heart of both the hardcore gaming community and the esports world.

For the uninitiated, Overwatch throws two teams of six into competitive multiplayer first-person shooter matches. Each team has a goal diametrically opposed to the other, such as moving a payload or maintaining control of a central objective. Instead of relying on classes like in Valve’s Team Fortress 2, Blizzard lets players choose from 29 “heroes” across roles, such as “damage” or “healer.” This means every character has a distinct look, personality, and chemistry with others on the field. For instance, one of Overwatch’s founding members, Ana, regularly chats with her daughter Pharah before matches begin.

Hero “personality” is an incredibly important part of Overwatch, and during the first months after the game’s release, fanart, memes, and romantic ships quickly boomed across the internet. Many of these were queer in nature. For example, there was the “Pharmercy” lesbian ship, based on the damage hero Pharah’s synergy with the healer Mercy. Another popular ship emerged between the damage heroes Tracer and Widowmaker after an introductory short for the game showed the former trying to prevent an assassination carried out by the latter.

There’s a reason for so many queer ships: One year before Overwatch’s release in 2016, Blizzard developers confirmed Overwatch would feature queer characters. In November 2016, lead writer Michael Chu expanded on that original claim, stressing that there are “multiple” LGBTQ heroes in the Overwatch universe. However, instead of revealing this information outright, Blizzard decided these characters’ backstories would come organically “in the course of stories that we feel really do them justice.” Blizzard’s first queer hero reveal came about in just that way. Tracer—a spry, British Overwatch recruit with spiky bedhead—was shown shopping for (and subsequently kissing) her girlfriend Emily in a Christmas comic published in 2016.

Soldier: 76’s identity was revealed in a similar way. On Monday, Blizzard published a short story called “Bastet,” in which Soldier: 76 talks about his ex-boyfriend Vincent. In the story, Ana looks at an old photo of Soldier: 76 with his boyfriend, and the two discuss how the Overwatch commander sacrificed his relationship to lead the task force. Chu later confirmed over Twitter that both men are gay.

“Jack and Vincent were in a romantic relationship many years ago,” Chu clarified. “Both identify as gay.”

Thanks for all the messages about “Bastet”!

Jack and Vincent were in a romantic relationship many years ago. Both identify as gay. ❤️

Queer representation is powerful, and its impact on gaming cannot be overstated. Games journalist Natalie Flores—who has written for Polygon’s Overwatch site, Heroes Never Die, and holds over 1,000 hours in Overwatch—is Latinx and bisexual and felt “immensely happy” that Tracer was revealed as a lesbian in 2016.

“I’m bisexual, so I don’t exactly share her identity, but to see a queer woman on the cover of that year’s GOTY and what is still a really big game made me so happy,” Flores told the Daily Dot over Twitter DM. “I’ve never heard anyone in the game express surprise at the fact that she’s a lesbian—everyone knows, whether they read the short comic or heard it from a friend.” (Discolusre: Reporter Ana Valens contributes to GameDaily.biz, a publication in which Flores is a coworker.)

Yet while Overwatch is clearly sending an affirming message to LGBTQ fans, players are torn over Blizzard’s handle on its queer characters. Tracer’s reveal took six months after the game’s release, and over two years went by between Tracer’s coming out and Soldier: 76’s short story confirming his gay identity. While Overwatch has plenty of queer-coded characters—mostly notably a buff, butch Russian woman named Zarya and a cyberpunk hacker with an undercut named Sombra—queerness rarely emerges blatantly in-game.

“I’m seeing all this queer Overwatch stuff come out and I have one thing to say about it: Put it in the game, you cowards,” game designer Mikey Zee tweeted. “No shade on the people who are into the background lore, but I’m tired of media like Overwatch and Voltron pulling this shit (especially with queer characters who are PoC-coded) while the main stories don’t show any of these queer narratives in the present day.”

I’m seeing all this queer Overwatch stuff come out and I have one thing to say about it:

Put it in the game, you cowards

Hey my life is miserable enough, happy queer stories are ok to write! Not everything has to be doom and gloom!

“Major game franchises revealing beloved characters as queer is still complicated and always causes backlash—the queer community can often not count on these things from big corporations—so I’m always grateful when we take steps to normalizing it,” Scheurle told the Daily Dot over Twitter DM.

As a game developer, Scheurle also understands that designing queer lore for Overwatch is not easy. Overwatch is a multiplayer first-person shooter, not a narrative-driven RPG. Blizzard only has its visual aesthetic and voice lines to work with for in-game lore, which is “not much to represent a complex identity.”

“As creators, you also kinda want to get it right and do the character justice and identity expression is complex and can’t just be easily ticked off by a punchy voice line,” Scheurle said. “So while I’d like to see more deep integration of queerness in AAA content, I also understand that not every genre lends itself easily to doing it justice, so I appreciate Blizzard’s approach.”

As a games critic herself, Flores feels somewhat similarly. While she had a gut feeling that Soldier: 76 is queer, she admitted she was “disappointed” with the enormous gap between Tracer’s reveal and Soldier: 76’s coming out. She believes that isn’t because Blizzard is “playing it safe,” but rather that Blizzard’s approach to telling Overwatch’s lore is flawed.

“The biggest complaint among fans right now is probably that the world feels stale because we don’t have more story content, more in-game events tying into old and new narratives of the Overwatch universe,” Flores told the Daily Dot. “So I think that Blizzard is struggling to find that balance of story and gameplay, and dedicating the time and resources to striking that balance.”

Then again, some queer onlookers believe a major AAA studio or corporation will never fully represent queer experiences. These critics stress that in a capitalist economy, profit drives development so strongly that major companies will never have queer players’ interests at heart. Instead, they encourage players to invest their money into queer creators who may not have the same support to continue creating queer art for queer art’s sake.

In the end, though, queer developers, artists, and players seem to agree on one core point: There’s not enough queer representation in the world today, and there’s always room for more of it. As queer customers continue to ask for more, that’s an issue game developers will have to address, whether they’re major AAA companies or bedroom developers.

“When you’re so used to being invisible, it’s easy to want to take what you get, as flawed as it may be, because, at the very least, it allows you to start and have conversations for better representation,” Flores told the Daily Dot. “In no way should we stop asking for more, because we deserve it, but I think these instances of finally being seen are really complex and it’s important to respect all the complicated feelings we form from them.”