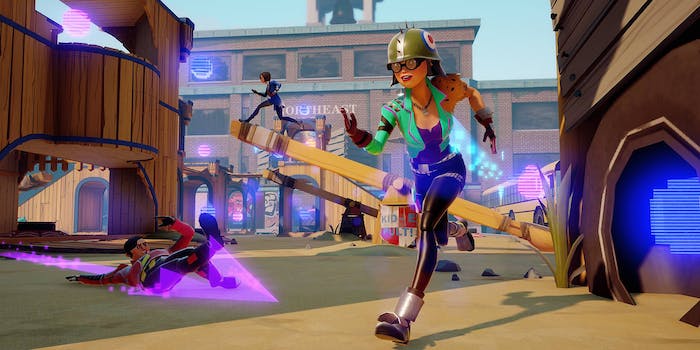 Twitch is letting broadcasters harness the power of their viewership.

Currently, viewers have limited options for interaction with streamers. They can subscribe, donate, and get certain perks. Many streamers also play online with subscribers. But there hasn’t been a way for a broadcaster to play with their entire chat hivemind in the way of Twitch Plays Pokémon.

To accomplish this, Twitch has brought on developers to build games from the ground up with Twitch integration.

Here’s our first look at three of them.

The first game shown off was Superfight, a simple card game that’s more about having fun with friends than actually winning. Similar to Cards Against Humanity, up to four broadcasters can debate who would win in silly fictional matchups. The deck may throw out Napoleon versus Chuck Norris, and the broadcasters will debate to try and convince viewers who to vote for. Viewers simply have to type #Napoleon to weigh in. Superfight is definitely a game that hinges on personality. Viewers will probably tune in to their favorite broadcasters playing Superfight—but games among lesser known personalities will be a harder sell. Streamline is far more ambitious. It’s a stylized, multiplayer third-person action game. Unlike Superfight, viewers have to go to a different website: Proletariat.tv. The game features a UI setup for viewers to affect conditions within the game. For example, players can cause a sandstorm. There’s also a built-in bingo that viewers can play to get better effects. For all intents and purposes, Streamline is a second screen experience.

The last game came from famed game designer Jesse Schell and his studio Schell Games. Wastelanders is a much slower game, a board game actually. In it, broadcasters and viewers work together to plan out moves to win rounds against another broadcaster. Of all the games shown, Wastelanders felt like the only game would only make sense on Twitch. A turn can take a maximum of three minutes, but each turn can contain multiple moves. Schell is still trying to find a balance with length of turns, but broadcasters and viewers seem to need the time to consider their actions, especially when something randomly drops on the board. Of all the games shown, Wastelanders was the most complicated; it won’t be as easy to just jump in and play. There’s still a lot that Schell Games is considering, like should players with more followers have an edge, tweaking the AI for broadcasters who don’t have a large followership, and to what extent should it small, well-trained teams to dominate. It’s still uncertain how this interactive concept will take off. But there is power in giving people a feeling that they’re contributing towards a win. When speaking with Schell, he said that sports fans believe that their presence at a game will help influence their teams’ win. It’s that same concept here. If Twitch and its Developer Success initiative can create content that makes people feel as if they have power, then we may see the second coming of Twitch Plays Pokemon.