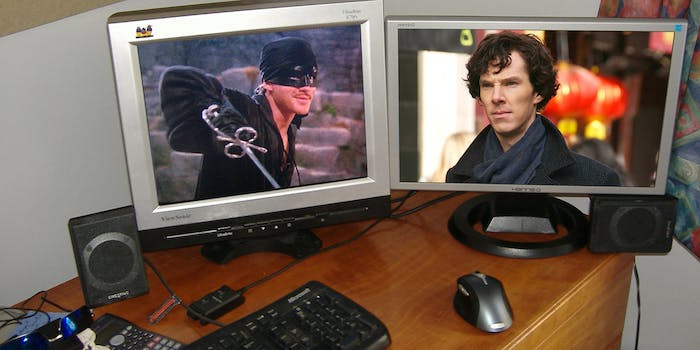 ‘Sherlock’ is more like ‘The Princess Bride’ than you think

As you wish, John.

Death cannot stop true love. All it can do is delay it for a while–especially if you faked your death to track down heinous criminals away from your mourning princ– er, roommate.

Tumblr user incurablylazydevil has uncovered a hefty amount of narrative similarity between The Princess Bride and Sherlock in a series of GIFsets that blew our minds and won our hearts earlier this week. The fan, who goes by Jadzia online, unearthed a number of parallels that, when placed side by side, remind us how powerful certain narrative tropes are as they play out in popular culture.

Oh, and they also highlight how the modern-day John and Sherlock are totally in a classical romantic relationship, whether or not Stephen Moffat wants to admit it.

It’s no secret that fandom loves its crossovers—that is, taking two stories from pre-existing universes and overlaying them, interlinking them, or sticking characters from one universe into the other. Still, the number of intersections that already exist between these two storylines is a revelation.

They both contain vows of undying fealty after Wesley and Sherlock faked their own deaths:

Meanwhile, while Wesley/Sherlock were off having adventures, both Buttercup and John are in a period of deep mourning.

Both The Princess Bride and Sherlock contain a deadly mind game centered around a simple choice between two deadly containers:

And they both contain unexpected fire rescues!

Both Wesley and Sherlock are temporarily “dead,” during which time they endure significant torture…

…a slumber from which the thought of their beloved (in Wesley’s case, Buttercup, in Sherlock’s case, John) is the one thing that can revive them.

As a bonus, Jadzia included this clever illustration of the Princess Bride and Sherlock fandoms:

Yup, sounds about right to us.

Be sure to check out the rest of Jadzia’s parallels at her Tumblr: Part One; Part Two.

And if you see any six-fingered men about London, you know who to call.