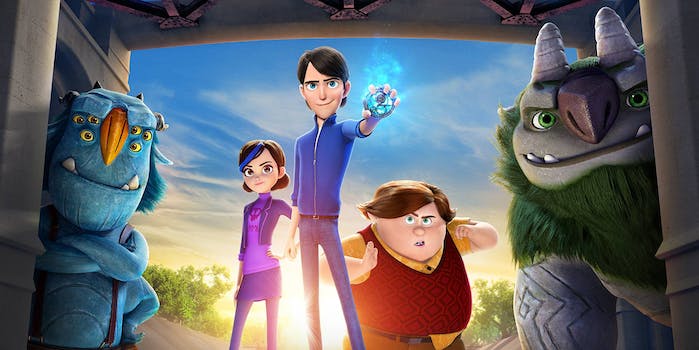 For fans of Guillermo del Toro's other work, his new Netflix animated series may be a big letdown.

Netflix‘s Trollhunters is the latest project from dark fantasy mastermind Guillermo del Toro, but fans of his other work may find themselves disappointed.

Created in partnership with DreamWorks Animation, it’s a simple adventure story about a teen boy who becomes embroiled in a secret war between the trolls and other supernatural creatures that live beneath his town. After finding a magic amulet that chooses him as the next Trollhunter (your classic “Chosen One” heroic protector role), it’s time for him to learn troll fighting skills from troll mentors, and tackle a supervillain disguised as a high school teacher.

If this sounds kind of formulaic and unoriginal, that’s because it is. Despite del Toro’s sparkling originality on the big screen, Trollhunters feels like something from the pre-Buffy era. Teen hero Jim Lake Jr. (Anton Yelchin) stands up to generic jock bullies at school and fights troll duels during his off-hours. His adventures are a by-the-book Hero’s Journey, featuring a cast of not-very-interesting characters like Jim’s best friend Toby, who winds up as the butt of several unnecessary fat jokes in the first couple of episodes.

Trollhunters‘ female characters are similarly disappointing compared to del Toro’s other work. Jim has a supportive and positive relationship with his mom, cooking meals for her while she’s at work, but her role doesn’t go beyond the typical conflict of a young hero trying to keep his dangerous activities secret from a parent. Meanwhile, his love interest Claire is a textbook example of the oddly popular “alternative girl with a blue hair streak” trope (see also: Wyldstyle in The Lego Movie), without much of a distinct personality. All of Jim’s troll mentors are men, and when a female villain is introduced, her character design is slim and lithe where the male trolls are generally muscular and chunky, fulfilling all the old stereotypes of sexual dimorphism in fantasy animation.

Trollhunters may be aimed at a young audience, but simplicity and kid-friendliness shouldn’t be confused with lazy writing. Even in the context of children’s heroic fantasy, this show just doesn’t stand out. There’s some appealing design work in the troll market scenes, and Jim’s warm relationship with his mother is a highlight, but that’s not enough to float a 26-episode series that (so far) feels like a retread.

If you’re in the mood for some classic heroic fantasy, we recommend revisiting Buffy, Narnia, or Harry Potter—or, if you’re looking for family-friendly animation, there’s Avatar: The Last Airbender or How To Train Your Dragon. The How To Train Your Dragon franchise is another DreamWorks Animation production with plenty in common with Trollhunters, but makes much better use of similar material.