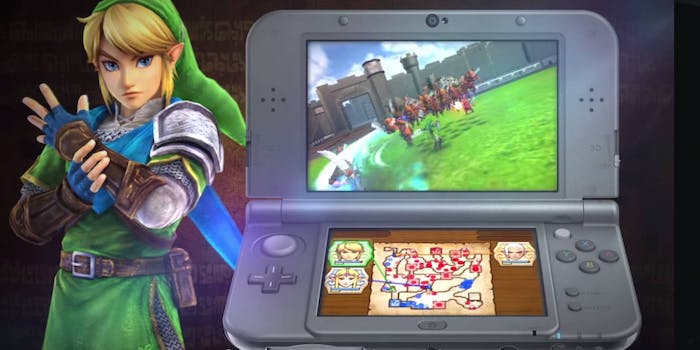 If you were hoping for news on the open-world Zelda, you'll be disappointed.

Nintendo had two big announcements for Zelda fans at its E3 press event, but neither had anything to do with the much-anticipated (and delayed) release of the new open-world Zelda game for Wii U.

Instead, Nintendo announced The Legend of Zelda: Triforce Heroes and Hyrule Warriors Legends, both for Nintendo 3DS

The first, is The Legend of Zelda: Triforce Heroes, a spiritual successor to Four Sword Adventures. It’s a three-player cooperative game that will encourage collaboration to solve puzzles and beat enemies.

The second is a sequel to last year’s Hyrule Warriors on the Wii U, but this time on the 3DS. Titled Hyrule Warriors Legends, it’s the same hack-and-slash fare, but with some extra characters, like Tetra and the King of Red Lions from the Wind Waker.

Triforce Heroes will come out fall of this year while Hyrule Warrior Legends will hit sometime in 2016.

While Nintendo showed us some glorious game footage of The Legend of Zelda for Wii U at E3 2014, the company was mysteriously mum on the subject during its 2015 presentation.

Following the announcement of the development of a new Nintendo console—code named NX—in March, fans started to worry at the next console release of the hugely popular Zelda franchise might skip Wii U entirely.

But Nintendo Game Designer Shigeru Miyamoto confirmed to IGN today that the open-world Zelda game would indeed be released on Wii U, though it’s unclear if it will share console compatibility, like Nintendo did with the release The Legend of Zelda: Twilight Princess on GameCube and Nintendo Wii.

The new game had been slated for release by the end of 2015, but launch has been delayed with no new release date on the calendar.