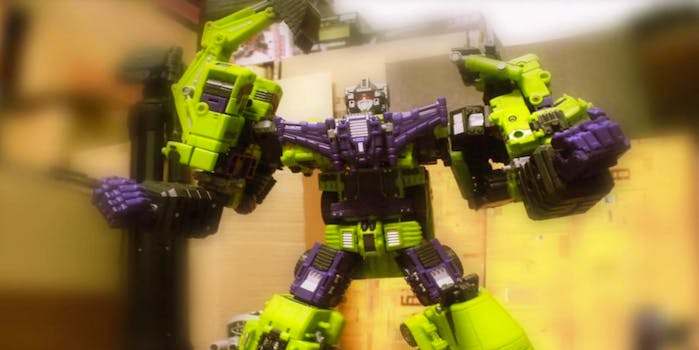 Forget saving your old Transformers toys for collectibles. This jaw-dropping, stop-motion fan film is an excellent reminder that toys were meant to be played with.

You might think that there’s no way an overly long home video of some guy messing around with action figures can be that impressive. But you’d be wrong. With Transformers: Generations, Harris Loureiro has brought the Transformers and the Decepticons to life against endearing backdrops of cardboard boxes, which somehow make his six-month filming effort that much more impressive.

The movie depicts a routine patrol with Bumblebee and Wheeljack that quickly escalates into a battle to save mankind—and an excuse for general badassery like this:

And, holy crap, that’s not even where it gets really good.

Loureiro used a team of six voice actors to provide the snark and banter we’ve grown to love in a good action film, and he borrowed most of the action figures from his friends, who clearly knew the value of sharing.

On his Facebook account, Loureiro hinted that he might be making a sequel that features a face-off between Hercules and Uranos. His new fans were quick to encourage him.

“The movie is amazing,” wrote a Transformers fan named Nathaniel. “Friends that think my collecting is nuts even agree that you’ve done something special.”