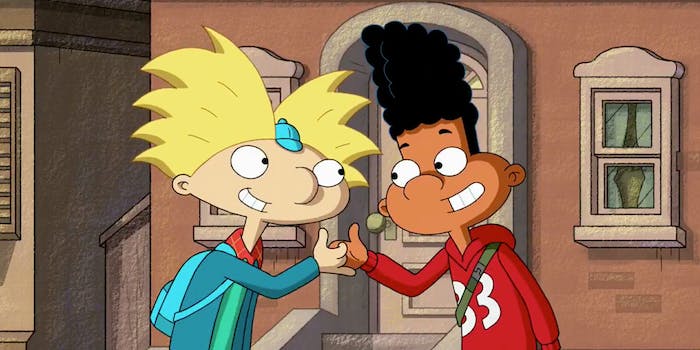 Arnold and the gang will all return.

Hey, ’90s kids, Football Head and the gang are back!

The new film picks up a year after the series finale left off (in 2004, if you want to feel super old), just as the kids of fictional Hillwood are about to enter the sixth grade. They’ve won a trip to the jungle of San Lorenzo—which happens to be the same place Arnold found a map of in his father’s journal in the finale.

The movie promises to fill plot holes and answer questions fans have been asking for years. Expect adventure and mystery—plus romance between Phoebe and Gerald (!) and of course, the will-she-won’t-she of Helga’s undying love for Arnold.

While many of the voice actors will reprise their original roles, Arnold will be voiced by Mason Vale Cotton (Bobby Draper, Mad Men) and Gerald by Benjamin Flores Jr. (Triple G, Game Shakers).

Hey Arnold: The Jungle will premiere on Nickelodeon at 7p.m. ET on Nov. 24.