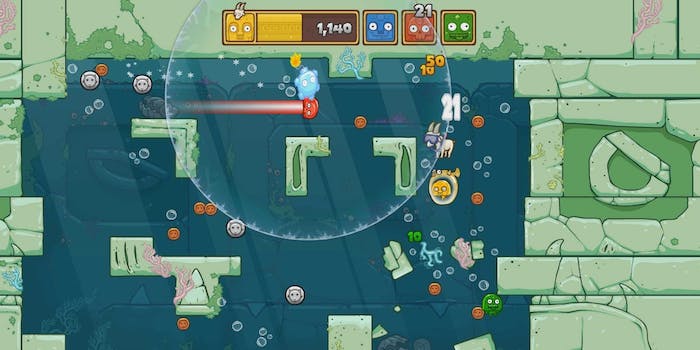 Ouya has a party in a box with ‘Toto Temple Deluxe’

The only drawback: You have to have friends to play.

In the past year there has been a resurgence of the four-player party game. First came Samurai Gunn, then Towerfall. Now there’s Toto Temple Deluxe, an Ouya exclusive from the team over at Juicy Beast Studio.

With the four-player arena combat genre starting to get crowded, can Toto Temple Deluxe differentiate itself from the crowd?

The mechanics of Toto Temple Deluxe are incredibly simple. One button is to jump, while the other button is to dash or shield. The pick-up-and-play ease of the game makes it great for parties. Unlike Towerfall, which requires players to also be aware of where their arrows are launching, Toto Temple Deluxe just has you headbutting your friends.

The concept is also very simple. The first person to 3,000 coins wins. But there’s a twist. In the center of the stage is a lone goat. Holding the goat nets you more cash. Strategically holding the goat while getting larger coins can clinch a victory. Your opponents, on the other hand, will be mercilessly attacking you in hopes of claiming the goat for themselves. The goat isn’t necessary to win at the end of each match, but it sure does help.

Items also play a large role in the game. Picking up things like a magnet will attract coins to you. Holding that magnet while holding the goat only ups the rewards. Players can also use items to harm the player holding the goat. Poison can deplete an opponents earnings or a bomb can leave opponents stunned as you collect coins.

There are multiple maps to choose from, each feeling distinct. Games last about one to two minutes, with the match going to the player who wins best two-out-of-three.

While Toto Temple Deluxe has relatively easy gameplay, it sets itself apart with bright and colorful art styling. Both Towerfall and Samurai Gunn have very muted palettes with pixel art aesthetics. Toto Temple Deluxe has a more flash animation feel, where characters have big expressions and lively movements. It lends to its general accessibility and ease of use.

Sadly, Toto Temple Deluxe does lack a few features would make it even better. There really isn’t a true single player option other than a training mode. This is somewhat limiting because to play you have to have friends present. This could have been circumvented with the inclusion of online multiplayer, but sadly the game lacks that feature as well.

Toto Temple Deluxe, at heart, is pure, simple, fun arena combat. The game truly shines with four players battling it out for the goat. Matches are quick and the game constantly has a forward-moving beat. Sadly, it’s a multiplayer-only affair. For $9.99 however, it’s a great value for some intense junk-food-fueled party sessions.