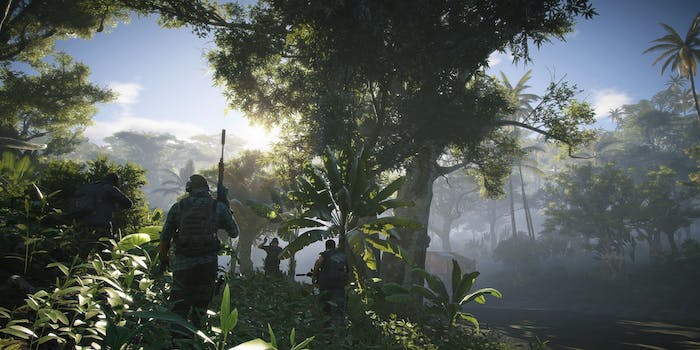 You know the ever-congenial LeVar Burton from Reading Rainbow and Star Trek. You probably don’t know him as a video game fan. Neither did I.

But assisting him with a cover of sniper fire while he charged a mortar nest in Ghost Recon Wildlands, assault rifle blazing, will probably go down as one of the coolest gaming experiences of my life. We were taking part in a game demo hosted by Ubisoft at E3 this week that quickly laid bare the essence of the game. 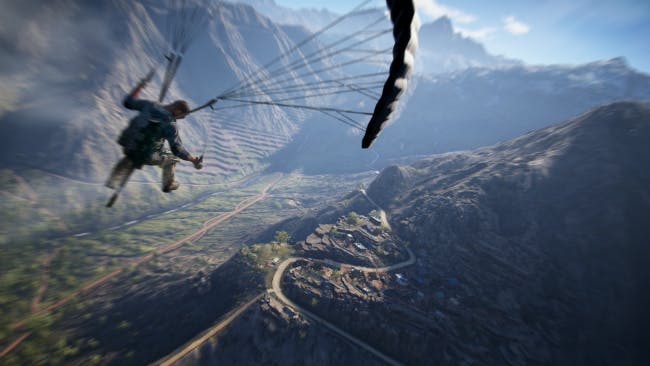 Games in the Tom Clancy’s Ghost Recon series are generally built around careful planning and teamwork. Ghost Recon operatives working in teams of four are equipped with high-tech gadgets that help them gain intelligence on enemy positions, and then use advanced weaponry to carry out precision assaults on enemy targets.

This does not describe my experience with Ghost Recon Wildlands thus far. It was much more free form and chaotic, more Far Cry than Rainbow Six. Wildlands takes place on a huge map in Bolivia. A team of Ghost operatives have been tasked with dismantling a fiefdom established there by the Santa Blanca drug cartel, and the Ghosts have been given the autonomy to pursue the mission as they see fit.

These Ghost Recon soldiers aren’t dressed in modern military uniforms. They’re wearing jeans and T-shirts and bandanas. They aren’t planning operations with military precision. They’re stealing whatever vehicles they like and assaulting enemy positions however they damned well please.

In the hands-on E3 demo of Wildlands, the squad was tasked with capturing and interrogating a high-ranking member of the cartel to discover the location of an intelligence cache. The second part of the mission was to then recover the cache.

As I waited my turn to file into the demo room, a member of the Ubisoft team said, “You’re going to be playing with LeVar Burton and his daughter.”

“Get the hell out of here,” I said in disbelief. It turns out that LeVar Burton was at E3 to promote Star Trek: Bridge Crew, an HTC Vive virtual reality game shown by Ubisoft at the Expo this year. His daughter, Mica Burton, is a member of the Achievement Hunter team at YouTube channel Rooster Teeth, which is presumably what brought her to the Expo.

Our demo guide from Ubisoft was code-named GhostTeamLeader. I was given the callsign Ghost 1, Mica was assigned Ghost 2, and LeVar was dubbed Ghost 3. We spawned into the mission near a target range on a hill that looked out over a high desert biome, tested our assault rifles and sniper rifles, and formed up to go on the mission. 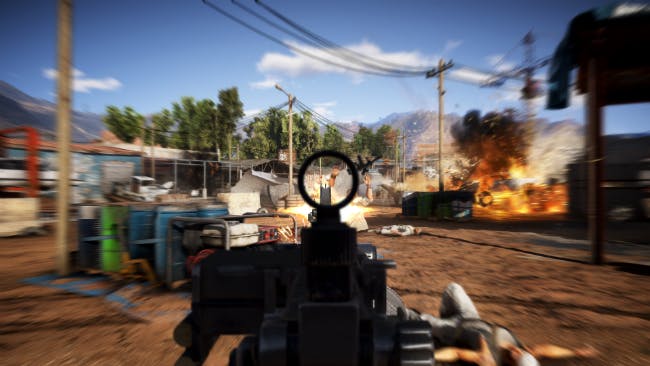 I have to wonder whether long-running fans of the Ghost Recon franchise or Tom Clancy’s games in general are going to be frustrated with Wildlands if players can get away with the utter lack of sophistication that we cumulatively foisted upon our poor guide from Ubisoft as he tried to demonstrate how proper tactical planning was supposed to work in the game.

The plan was for our squad to deploy reconnaissance drones and scan the fenced-in area around a two story building, tagging guards so that we could track their positions as we prepared to engage and kidnap the target for questioning. GhostTeamLeader and I were supposed to circle around to the west, while Ghosts 2 and 3 were supposed to circle around to the east. We’d close toward the building and then launch a surprise attack from both sides.

This went to hell immediately. The guards opened fire on us mere seconds after we finished scanning the compound. I switched to my sniper rifle to start picking off guards as quickly as I could, and then charged down a hill toward the compound as another employee from Ubisoft watching the action tried to give us action reports over our headsets as to who was where, and doing what.

Our target dashed out of the building and into a white Humvee. I shot out both tires on the left side of the vehicle, grabbed a motorcycle in front of the building, and took off after the target as he drove away.

The target stopped at a gas station only a minute down the road. The Ubisoft employee observing the action continued to try and keep everyone in the squad apprised as to everyone else’s position, but there was little point as the situation kept changing so quickly.

I dove off the bike in the parking lot of the gas station, mowed down some guards, and grabbed the target as the Burtons and GhostTeamLeader showed up and engaged.

“Let’s take him somewhere quiet to interrogate him,” GhostTeamLeader said. I instead stopped behind a pile of concrete pipes off to the side of the gas station, stuck my pistol into the head of the cartel member, and got the info we needed while the Burtons continued shooting up the place. 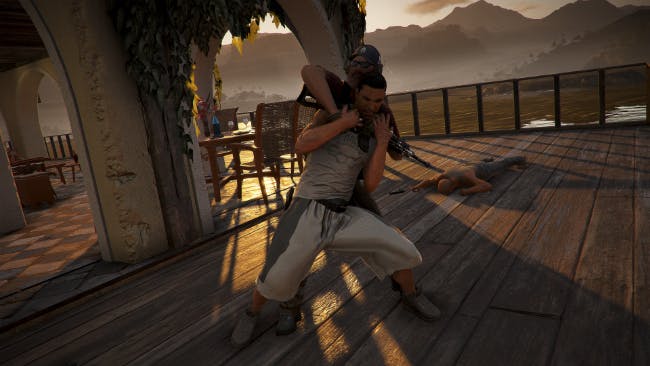 I love that everything quickly descended into chaos, but that it still worked because the Ghost Recon series in particular and Tom Clancy’s games generally take themselves so damned seriously.

They’re spiritually and thematically in line with the fiction written by Clancy, military thrillers that tried to base themselves on real world technology, plausible political situations, and high stakes conflict. The recent Tom Clancy’s Rainbow Six Siege is a game about close-quarters combat where a single shot can kill you. If you don’t take the game seriously, you may as well not bother playing.

Ghost Recon Wildlands likely becomes a much more serious game in the higher-difficulty areas of the map that would have made a terrible choice for an E3 demo, where the people may never have played a Tom Clancy’s game in their lives. But I hope it doesn’t become too regimented at higher difficulties because the chaos the Burtons and I caused was hilarious and fun.

Wildlands is like Grand Theft Auto in that you can steal any vehicle you choose. Having procured the location of the intelligence cache we were after, I tried to convince the squad to steal the target’s Humvee, shot out tires be damned because I noticed it had a gatling gun turret on top. GhostTeamLeader instead told us that we would be taking a helicopter. This also had gatling guns, one on either side, which was acceptable. 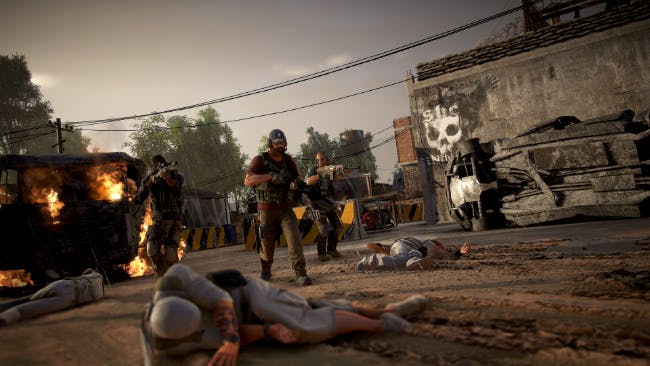 A minute later we’d located the compound in which we’d find the cache. A pair of machine gun nests on the east wall guarded one entrance. A mortar nest was between a pair of guard towers on the west side. A watchtower stood on a cliff on the south side of the compound.

The Burtons and I base-jumped out of the chopper and landed on a smoke marker on a hill to the north of the compound. I honestly have no idea what the hell GhostTeamLeader did with the helicopter, but soon all four of us were on the ground, sending up our recon drones and marking targets.

The plan, again, was for GhostTeamLeader and I to circle one way while the Burtons circled the other way. But a few seconds after the team split into pairs I heard the whistle of incoming mortar rounds. Cue getting out the sniper rifle and gunning down the cartel members in the machine gun nests as rapidly as possible while GhostTeamLeader sprinted up the hill to clear the watchtower.

The next thing I know I’m scoped in with my sniper rifle and I see LeVar Freaking Burton rushing the mortar nest solo. And I am the worst sniper in the world but there was no way in hell I was letting Ghost 3 go down. He directed some mean episodes of Deep Space Nine.

I started sniping away at all the guards on the other side of the base that were firing on him. The rest of the squad was free to move after Ghost 3 had cleared the mortar position. We mopped up the survivors, grabbed the intelligence cache, stole a jeep, and took off as I threw grenades out the window at a cartel member we’d somehow missed. 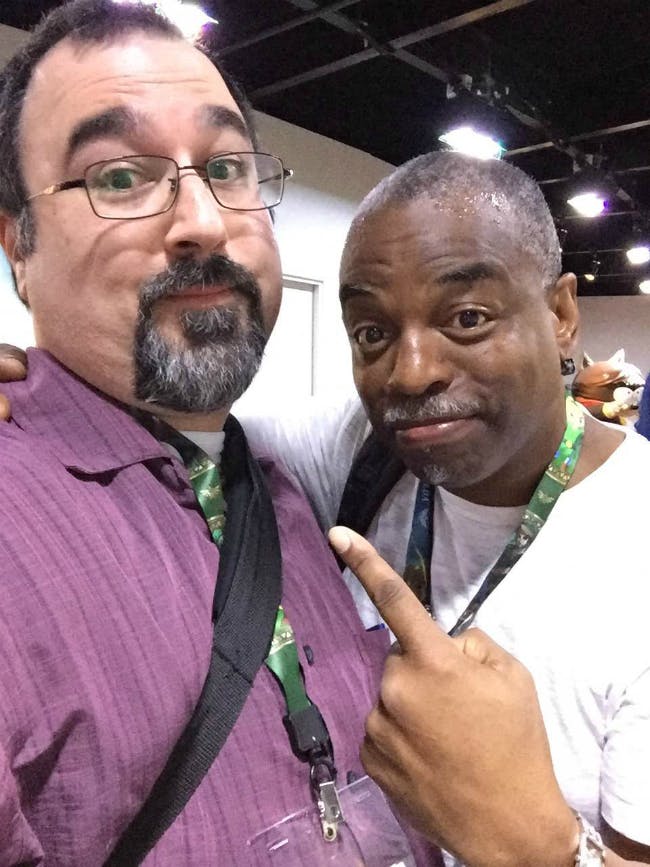 The appropriately titled Ghost Recon Wildlands is the least disciplined, most unstructured game in the series by far in my opinion, but it still feels authentic because I realize that what actually makes a Ghost Recon game isn’t the high-tech gadgets and weapons. Teamwork is what a Ghost Recon game is all about.

Everyone in the demo supported one another’s movements even if we more or less improvised the entire mission; no one died and the mission was a success.

I look forward to forming up with my regular gaming buddies and seeing how much chaos we can wreak in the wildlands of Bolivia. And if I see LeVar online, I’ll send him an invite.