An unfinished story by J.R.R. Tolkien that ties into the Lord of the Rings universe is set to be published on Aug. 27.

The Story of Kullervo was one of J.R.R. Tolkien’s earliest fantasy stories, one he never got around completing. It’s based on the Finnish epic poem Kalevala, and follows the magician Kullervo on his quest for vengeance against the sorcerer Untamo. Here’s the description of the book on Amazon: 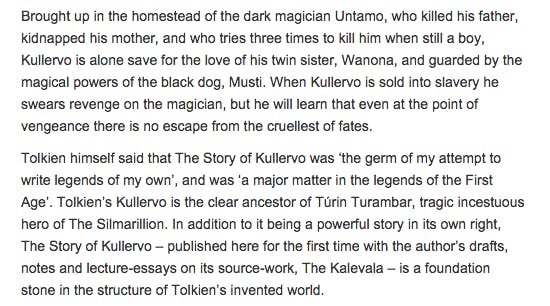 Tolkien’s reference to the “First Age” is important, because that’s what ties this story into LOTR canon. Tolkien’s Kullervo is an ancestor of Túrin Turambar, tragic hero of The Silmarillion.

Though The Story of Kullervo is being marketed as an unknown and previously unpublished story, it was actually published along with notes by Verlyn Flieger in Volume 7 of the journal Tolkien Studies. Flieger provides commentary in the new edition as well.

Published by HarperCollins, the book will cost $20.99, and features Tolkien’s drafts of the story, notes, and essays on its sources.

H/T i09 | Illustration by Max Fleishman