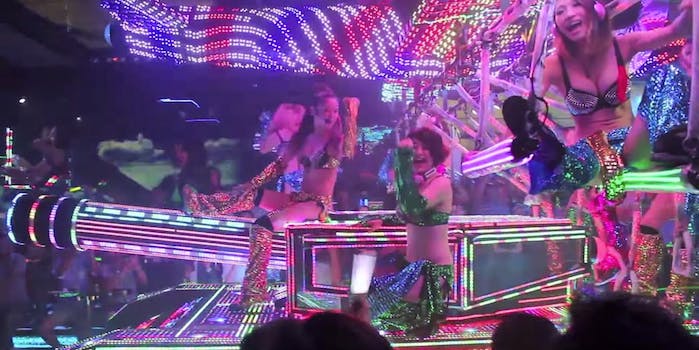 Giant mecha cosplay, a laser light show, epic battles, J-pop—either something is happening with Japan‘s famous robot restaurant or The Force Awakens has gone wildly off the rails.

For the sadly uninitiated, the Robot Restaurant is a variety show housed in Tokyo‘s Shinjuku area. In the U.S., we have dinner theatre and medieval land fun time world, but in Japan, they have—what else?—giant robots.

For two days only, however, the Robot Restaurant is branching out beyond Japan and taking its act on the metaphorical road. Travel company Contiki is bringing the show to Sydney in March, leaving die-hard Australian fans plenty of time to get in on the action. Based on these YouTube videos, it seems “robot restaurant” is code for “epic sci-fi rave” and “women in glitzy bikinis dancing to Gangnam Style.”

Wow. How soon can we bring this party to our neighborhood?