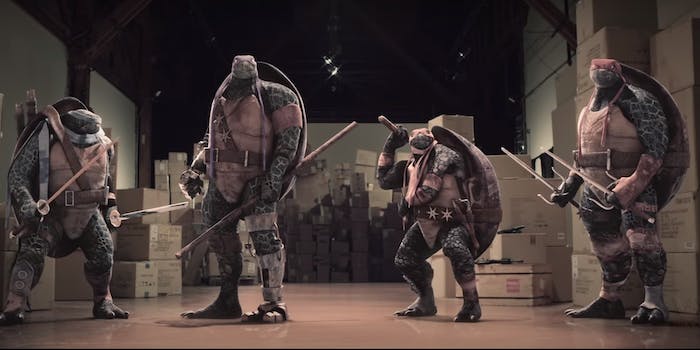 The film made the Ninja Turtles look like actual turtles, and somehow it totally works.

The last Teenage Mutant Ninja Turtles movie received almost unanimously negative reviews, but that hasn’t stopped the filmmakers from greenlighting a sequel for 2016. Luckily, we still have fan films to remind us that TMNT can be good.

Veterans of the Night is an awesome short film from TMNT fan Miguel Diaz-Rivera, who wrote and directed it as his thesis project at the Academy of Art University in San Francisco.

The two coolest details are the fact that he redesigned the turtles to look more like real turtles (unlike the roided-up hulks of the Michael Bay-produced movies), and the Matrix-style slow-motion action sequence. Diaz-Rivera describes it as an homage to the original TMNT comics, but with a “realistic approach.”

As well as being a skilfully made fan film, Veterans of the Night has helped us warm to the idea of a “gritty” version of the Ninja Turtles. Despite the understandably lower production values, this design somehow looks a lot less silly than the blockbuster movie version.