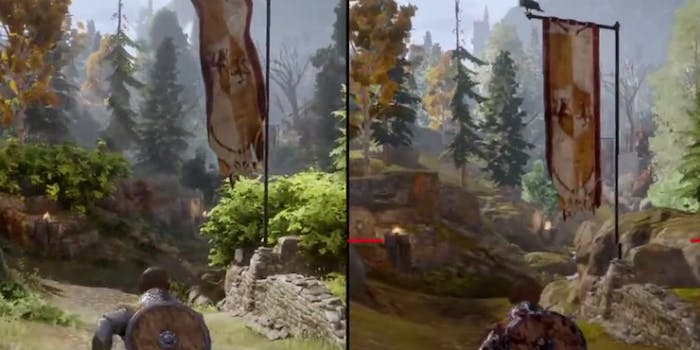 This video shows why it’s time to upgrade your console

If you’re still on the fence about buying a new console, this might change your mind.

Nothing says “my game console sucks” more than seeing what the same game looks like on your old console vs. on a new console. That’s usually when it’s time to shell out for the upgrade.

Digital Foundry produces comparison videos of game hardware performance. It put together a three-frame comparison of Dragon Age: Inquisition running on a PlayStation 4 (new), an Xbox 360 (old) and a PlayStation 3 (old). And the PS4 version makes the other two look terrible.

Here’s what to look for: The amount of detail on the ground like rocks and grass, gradation of colors, the sharpness of shadows, the way light glints on pools of water, and effects like fog. Blow this video up and set it to the highest resolution, and the differences in quality become clear to even the most casual observer.

Calling the Xbox 360 and PlayStation 3 versions of the game “terrible” is hyperbolic. Those versions of Dragon Age: Inquisition are presenting graphics that console gamers would have killed for 10 years ago on the PlayStation 2 and original Xbox. This is why your gamer friends will stand in line for hours and shell out hundreds of dollars for a new gaming box every five years or so.

These jumps in graphics quality have historically been very distinct since the release of the Magnavox Odyssey in 1972. The Atari 2600 released in 1977 was clearly superior to the Odyssey. The Nintendo Entertainment System in 1986 was clearly superior to the Atari 2600, etc. “Console generations” are slates of new gaming hardware released in close proximity to one another that generally denote major changes in performance.

It takes game developers a while to get used to a new generation of game consoles, and thereby to really get a handle on what the new consoles are capable of. Dragon Age: Inquisition clearly shows that the developers at BioWare know how to take advantage of what the PlayStation 4—and by extension what the Xbox One—can do. This Digital Foundry comparison video provides a clear cut example of what the generational leap has made possible for game performance. You don’t have to be a gamer to see the improvements.

If you are a gamer, and haven’t upgraded to the eighth generation yet, it’s probably time to make the leap if you can afford to. The difference between the old and the new hardware is only going to get wider from this point forward.