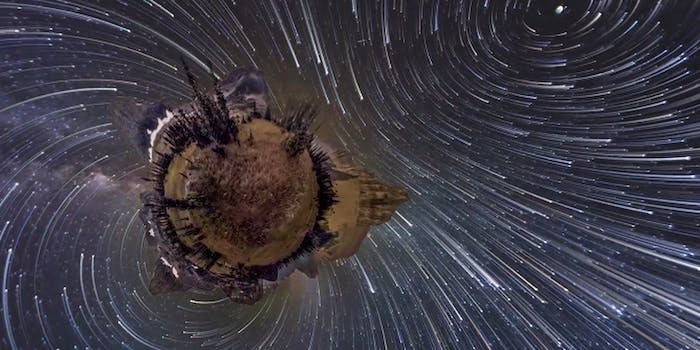 It's trippier than simply looking up.

One of the best things you can do on a summer night is lay outside, look up, and imagine that you are on a tiny piece of rock hurtling through space, zooming through the stars. Because you are. If that’s a little hard to feel viscerally, maybe this mind-bending video featuring time-lapse panoramas of the wheeling heavens will help.

Be sure to view the video in full-screen view for the full effect. Occasionally you can even see quick streaks of light that are probably shooting stars or satellites. On his website, photographer Vincent Brady explains his inspiration for the project:

While experimenting with different photography tricks and techniques back in 2012, I was shooting 360 degree panoramas in the daytime and long exposures of the stars streaking in the sky at night. It suddenly became clear that the potential to combine the two techniques could be a trip! Since the Earth is rotating at a steady 1,040 mph I created a custom rig of 4 cameras with fisheye lenses to capture the entire night-sky in motion.

Brady carted the rig around the U.S. and parts of British Columbia to nab some great photos. Some of his incredible stills can be found at his website. You should also check out his firefly time-lapse photos.

If you’ve seen time lapse photos of the night sky before, you’ll recognize the star trails created by the Earth’s motion. They look like lines of light in time-lapse photos. Many stars rise and set just like the sun and moon, but the stars above the Earth’s poles appear to stay still. That’s how the North Star, called Polaris, guided sailors, travelers and people fleeing slavery.

“Normally, since you can only look in one direction at a time, you don’t have to deal with all these different movements all at once,” writes astronomer Phil Plait on his Bad Astronomy blog at Slate. “But in the video we’re seeing the whole sky at the same time, with all those weird motions combined.”

Plait also breaks down the strange distortions panoramas can introduce. The sorta-flat horizon panorama is what most people are used to seeing, but Brady also uses the “little planet” effect, where the horizon is wrapped around to create an earth-sphere floating in a sea of stars. Check out this group on Flickr for more little planet goodness.

Until we figure out how to move our eyeballs around the sides of our heads, this kind of camera wizardry is our best chance to see every bit of the spectacular sky at once.