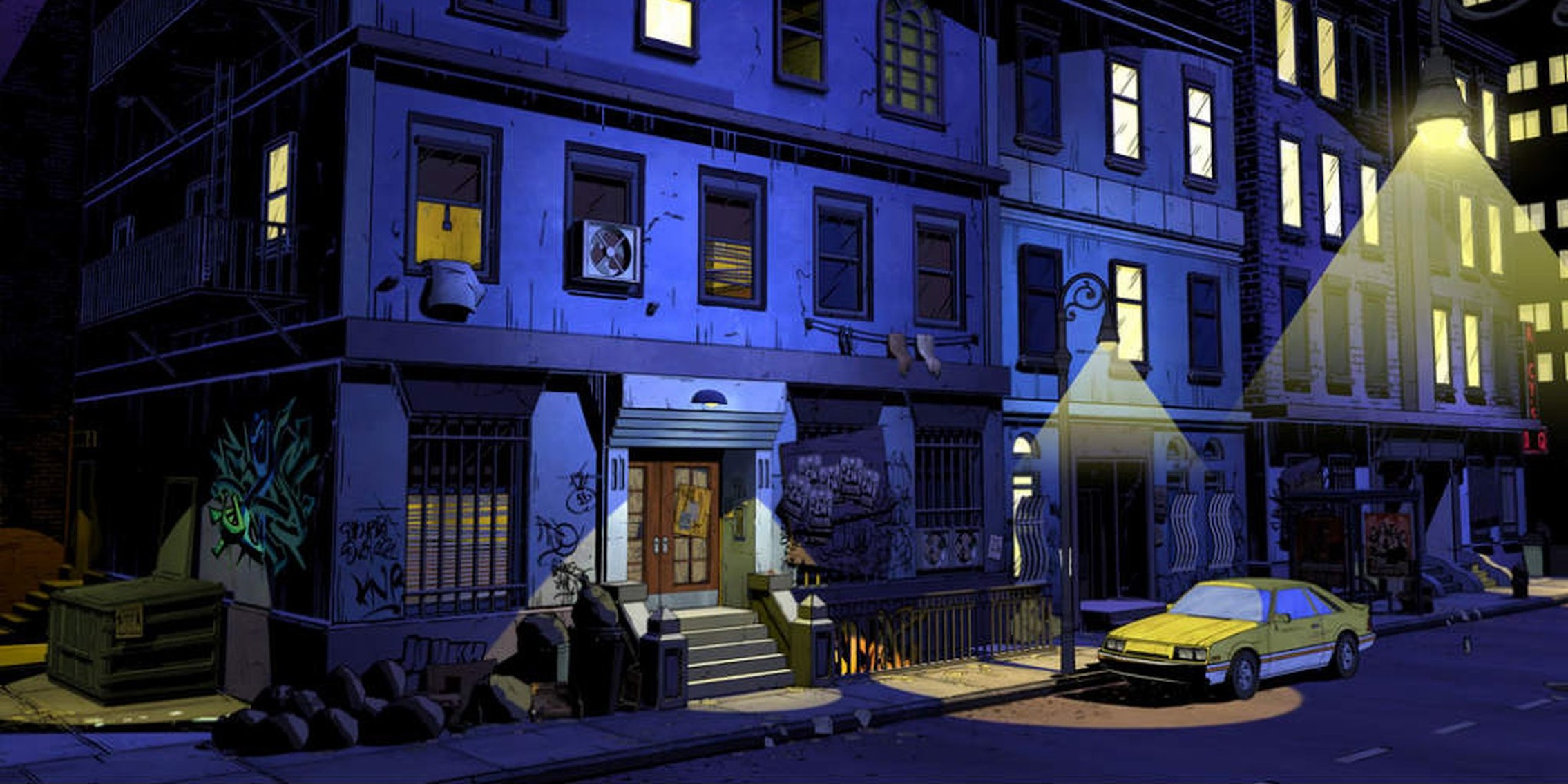 Binge-playing ‘The Wolf Among Us’ gives the game more bite

We binge-watch television, so why not Telltale's episodic game?

I binge-watch series like House of Cards on Netflix because I feel like it improves my experience. So it stands to reason that binge-playing an episodic video game would also be fun. Right?

I played Episode 1 of The Wolf Among Us, which was developed by Telltale Games, when it was released in October. The game is a prequel story that takes place before the first issue of the Vertigo/DC comic book series Fables, created by Bill Willingham, that The Wolf Among Us is based upon.

For whatever reason, I hadn’t played any further episodes of The Wolf Among Us since October. The final episode was released two weeks ago, on July 8. I decided to try binge-playing the rest of The Wolf Among Us to see how the experience contrasted with playing The Walking Dead, the previous title from Telltale Games, as the episodes were released.

For me, the end result of binge-watching a television series is a better appreciation for an individual season’s structure, greater attachment to the characters, and being more excited to see the next episode than I otherwise might be with a week-long break.

This was completely the case for binge-playing The Wolf Among Us. I skipped months-long breaks between episodes and thus had a much more coherent experience than if I’d played the game episode-by-episode. My binge playthrough of The Wolf Among Us was so positive an experience that I may have to wait to binge-play Season 2 of The Walking Dead, as well. 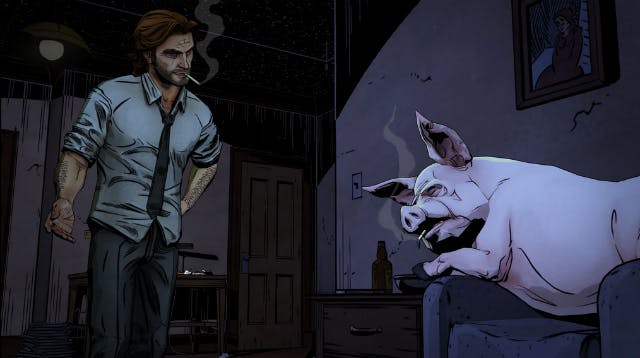 In the Fables universe, the characters from your favorite nursery rhymes and childrens’ books—Beauty and the Beast, Snow White, the Three Little Pigs, the Big Bad Wolf—are all real, and have been chased out of their magical homelands by an unnamed adversary.

Now the Fables live in a gritty neighborhood in New York City called Fabletown, under a protective spell that diverts the attention of normal people, who the Fables refer to as “mundies.” The Fables run a sort of government out of the Woodland Apartments, but they’re mostly on their own to find jobs and support themselves.

If a Fable appears human by default, or if they can afford a magical glamour which makes them appear human, they can remain in the city. If non-human Fables can’t afford glamours, they have to live on the Farm in Upstate New York, away from the prying eyes of the mundies.

The premise may sound ridiculous at first, but Bill Willingham managed to weave human concerns within magical contexts so well that the Fables comic book series has won 14 Eisner Awards since 2003. The blending of fairy tale and mundane life is as well-executed in The Wolf Among Us as it is in the comics.

Bigby Wolf is the sheriff of Fabletown. His remit is to keep the peace and prevent mundies from discovering the Fables’ existence. Snow White is the assistant to Deputy Mayor Ichabod Crane, who is an incompetent, petty bureaucrat. Fables are living destitute lives as slumlords, or struggling with alcoholism, or turning to prostitution to make ends meet, in the face of a government that doesn’t seem to care.

The art is drawn in the same style of sharp lines and cel-shading that characterizes Telltale Tool, the game engine that drives all Telltale’s games. The coloring is often vivid and high contrast. Circles of yellow thrown by streetlights play against bright pinks and deep blues on buildings. The lines scream cartoon, and the color screams fantasy, without breaking the illusion that we are very much dealing with the real world. 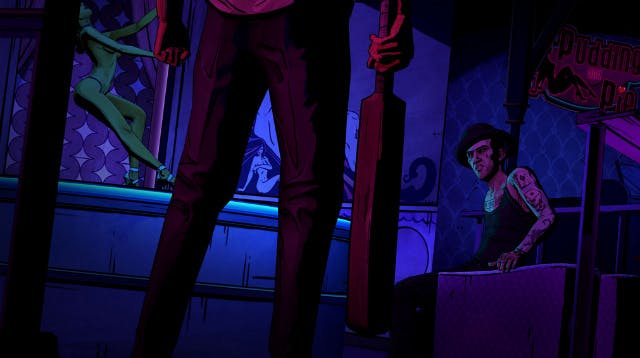 A binge-playthrough served The Wolf Among Us because it’s a detective story. When a pair of prostitutes are beheaded, and their decapitated heads are left on the footsteps of the Woodland Apartments on separate nights, Sheriff Bigby has to investigate. A contiguous playthrough helped keep all the clues, and the connections between them, much more clear than I expect they otherwise might have.

There are no incorrect choices in Telltale Games. In one moment, Bigby had a choice to investigate the apartment of one of the murdered women, after seeing in a Magic Mirror that someone was wounded, and possibly dying there. Or he could have gone to the home of an apartment that was being burglarized and whose occupant, Mr. Toad, has a son.

Swept up by the pace of my playthrough, I found myself taking a lot more time to make the big decisions in The Wolf Among Us than I did in The Walking Dead. I would have expected the opposite—that I’d want to keep the story moving and make quicker decisions, versus taking more time to mull them over.

The binge-playthrough gave everything I did a greater sense of immediacy, even when I knew the result of either choice might only relate to the flavor of the playthrough, and not substantively change the end results.

Telltale games mostly involve walking around environments, looking at objects of interest and sometimes picking them up for use in later puzzles, and branching dialog conversations with characters. In The Walking Dead, I felt like I was observing things from the outside. I made decisions for the main character from a third-person omniscient perspective.

I found myself taking notes in first person voice, however, during my playthrough of The Wolf Among Us. The experience felt more participatory, like I was helping to build the story rather than merely walking through it. When I played The Walking Dead, I had felt like I was controlling the main character, Lee Everett. When I played The Wolf Among Us, I felt like I was molding the character of Bigby through making my choices, i.e. through performing as the character, because I saw the effects of those choices almost immediately.

In one instance, I made the decision to kill a character who attacked Bigby when he was getting too close to solving the case. I decided to make the kill because it was an expression of Bigby’s struggle to balance his nature as the Big Bad Wolf with the need to temper his instincts, now that he was living in the mundy world.

I made the decision because it was a narrative choice that contrasted with hours of playing it smooth. Had I been taking two months between episodes, I think I might have chosen differently. Again, neither choice was correct, but killing the character felt like the kind of decision I might have made back in my screenwriting days, expressing Bigby’s character through conflict. 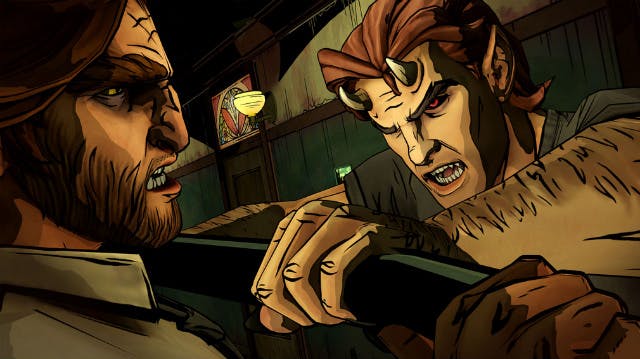 The kinesthetic aspects of The Wolf Among Us involve fight and chase scenes. You press the control sticks in a certain direction to dodge objects, mash on buttons to represent feats of strength, or follow button prompts to grab and throw objects or land punches. Telltale spaces these encounters out evenly throughout their seasons, ostensibly to provide satisfaction in each episode for players who crave action.

The fights were more harrowing in The Wolf Among Us than violent encounters had been in The Walking Dead. There was more of a sense of immediate threat, intensified by seeing Bigby take injuries in a sequence that more closely matched the timeline in which the story took place. When I saw a doctor patching Bigby up and warning him against further injury two hours earlier, versus two months earlier, I was more reticent to see Bigby get injured when he squared off against the next Fable of the monster variety.

The “holy shit” moments when Fables like The Jersey Devil or Bloody Mary abandoned their human glamours, and revealed themselves as terrifying demons also took on additional weight when they happened in rapid succession. The horrific experiences had a chance to build upon each other in the same way the fight sequences did.

What the binge playthrough gave me, overall, was a much better sense of how the five acts blended into one another. The opulence of Beauty and Beast’s apartment disgusted me, after nine hours of back-to-back encounters with Fables in truly horrible financial situations.

When I discovered the depths to which the villain had sunk his claws into Fabletown society, his machinations being largely responsible for all the squalor and desperation I’d seen in rapid succession throughout the binge-playthrough, I really had to check my desire to deal with him outside the law. 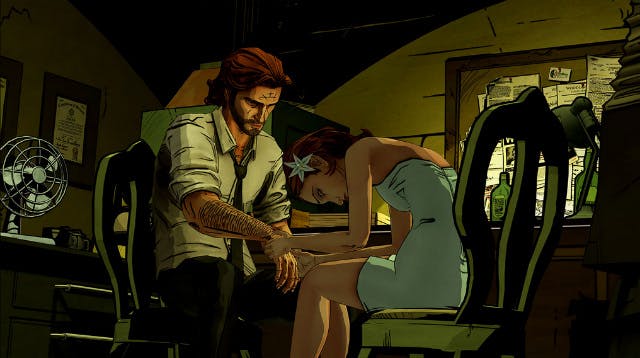 The further I got into the playthrough, the more the experience felt like reading a graphic novel rather than picking up a comic book month to month. The cliffhangers between episodes meant less, so a binge-playthrough will obviously take something away from players who enjoy the suspense between episodes of Telltale games.

The only other potentially negative aspect of a binge-playthrough is the effect of the ending.

All five episodes flowed together so smoothly over the hours of my contiguous experience that the ending, which I don’t think Telltale Games nailed, snapped me out of the spell I’d been under. Pun intended.

That said, as the title sequence of The Wolf Among Us, which depicts a cigarette-smoking Bigby walking down the street, his eyes glowing in the darkness, played out once the ending credits finished rolling, I forgot about my momentary annoyance. And I genuinely felt like binging immediately on The Wolf Among Us again, making different sets of choices to see how the story panned out.

Telltale has proven again how well their episodic storytelling format lends itself to adaptation of successful franchises. And the binge-playthrough taught me that anyone who hasn’t been following The Wolf Among Us episode-by-episode, and who therefore might feel like they missed the boat, couldn’t be more wrong.

Our review copy of The Wolf Among Us on PlayStation 4 was provided courtesy of Telltale Games.