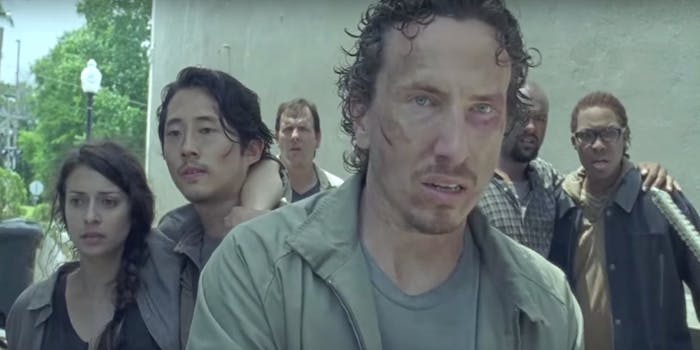 Warning: This article contains massive spoilers for the latest episode of The Walking Dead.

At this point in The Walking Dead, it’s nearly impossible to come back from a life-threatening wound. There aren’t as many doctors, veterinarians, and even doctors-turned-psychologists in that world to take up that mantle anymore, and if you get bit by a Walker? There’s no coming back from that. If you’re lucky, someone will put you out of your misery before you turn.

This week’s episode of The Walking Dead, “Thank You,” saw plenty of that. And while many of the Alexandrians who were trying to get home with Rick Grimes, Michonne, Glenn Rhee, Daryl Dixon, Abraham Ford, and Sasha Williams ended up becoming zombie food, a fan favorite ended up among the ranks of the walking dead. Or did he?

Towards the end of the episode, Glenn and Nicholas (one of the people from Alexandria) found themselves surrounded by Walkers while they stood on top of a dumpster. They were attempting to light a building in an abandoned town on fire to distract the walkers and let everyone else escape, but they were dismayed to discover there was no building. It’s the sort of hopeless situation we’ve seen the Group get into before, and they’ve managed to get out unscathed before. But this time, Nicholas, overtaken by the hopelessness of it all and haunted by flashbacks of him abandoning his friends in the same area, took a gun to his head. His body brings Glenn down with him.

And the next thing we know, it appears that Glenn’s guts are being ripped out and eaten by Walkers.

Glenn has been on the show since the beginning, and his death isn’t sitting well with fans, who are naturally upset.

Sorry can't go to school tomorrow their was a death in my family #RIPGlenn #TheWalkingDead pic.twitter.com/S4EUgjyVnZ

Normally, we wouldn’t be having this conversation. Dead is dead—until it’s undead and dead again. And it’s not like there’s a character conveniently around who can resurrect him. But a section of The Walking Dead fandom is convinced that despite what we saw, Glenn is not dead. And poor-quality set photos seem to support this, although the production could be filming a flashback.

every TWD fan rn after that episode (still lowkey hoping that he is alive) #TheWalkingDead pic.twitter.com/72ZxnqgEwE

It may be at least a couple weeks until we find out Glenn’s fate—next week’s episode looks like it’ll mainly be Morgan-centric—so the conspiracy theories will likely grow.

Here are a few already floating around.

1) The Walkers were ripping up Nicholas, not Glenn

Glenn was set up for a brutal death this episode in part because the show managed to show him being reflective with Hershel’s watch earlier this season, but there was also a callback to season 1. The first time Glenn talked to Rick, he called him a dumbass, and “Thank You” featured the same thing. (We could easily see it being just how they say goodbye.)

My heart is broken. #TheWalkingDead pic.twitter.com/pYLL74KLFM

By the end of the episode, we saw someone’s guts being ripped out. So if it wasn’t Glenn who suffered that disembowelment, who was it?

Plenty of people are already coming to the conclusion that it was Nicholas.

I don't think he's dead. I think they're snacking on someone else. He's just freaking out.

Let’s look at it closer, shall we?

After Nicholas shoots himself, his body falls to the ground and takes Glenn with him.

Seconds later, we see the Walkers feasting on some human flesh.

There are a couple things to note here. Glenn and Nicholas are wearing similarly colored shirts, which could be mistaken for one another given how quickly it gets obscured with blood. And the chest being ripped up appears to be too high to be Glenn’s given the position of his head.

As both season 1 and 5 of The Walking Dead remind us, a person can blend in with a herd of Walkers if they’re covered in enough Walker blood and guts.

At this point, Glenn would be covered in Nicholas’s blood—who’s definitely dead. After feasting on Nicholas, the Walkers might not notice Glenn laying there directly under him (and possibly on top of dead Walkers), which would give Glenn a couple of options. He could walk away after the Walkers left him (and possibly blend in some more), or he could crawl under the dumpster while the Walkers were too preoccupied with Nicholas to notice.

Some believe this wide shot shows Glenn escaping under the dumpster.

But of course, everyone has to die sometime, which leads us to…

3) His death in the comics is too iconic

At this point, the only characters who are as untouchable as they can be in this world are Rick Grimes, his son Carl, and Daryl (a TV-only character as beloved as Glenn). Everyone else is constantly at risk.

While Glenn’s fate on the show is still uncertain for many fans, his status in the comics is a lot clearer. Glenn dies in Issue 100 after his head is bashed by Negan’s bat (which he names Lucille). It’s pretty gruesome, and one of the most memorable parts of the series.

The Walking Dead is loosely based on the comics by Robert Kirkman, which means that while some scenes are adapted faithfully, others are remixed or rearranged in the show. For example, Andrea is still alive, Frank lives longer than he does in the show, and Lori (who doesn’t die in childbirth) ends up crushing baby Judith when she does die. Here, Negan hasn’t even been properly introduced yet.

And Glenn’s death in the comics is something that Steven Yeun, who plays Glenn, is more than aware of. It’s something he and Entertainment Weekly’s Dalton Ross have discussed multiple times.

“Yeun’s take has been that it is too big a moment for it not to happen and that fans might feel cheated if it does not go down on the TV show,” Ross wrote. “I’ve always felt that the biggest shock the producers could deliver is making the audience believe it is going to go down that way, only at the last minute ‘remixing’ the result (as showrunner Scott M, Gimple likes to do) and having it occur to someone else instead (Aaron? Abraham? Sasha?). However, for that scenario to play out, you still need Glenn alive at that point. Which means you can’t kill him here.”

And interestingly enough, Yeun discussed the possibility of Glenn’s death back in April.

“The way that we make the show—the writers and everybody really want to focus on making things poignant and purposeful and meaningful,” Yeun said. “So if it were Glenn to go, then it’s probably going to be awesome.”

Of course, like Ross said, someone else could take Glenn’s place when Negan does take out his beloved baseball bat. Maybe even someone as important as Daryl?

4) Do we really need to put Maggie through even more suffering?

There’s no basis to any of this, but in the five seasons since she’s been introduced she’s lost her entire family, her home, and witnessed both her father and sister’s murders. And now she may have lost her husband, who may or may not show up again as a Walker.

Just keep that in mind.

5) A lack of certainty from The Talking Dead

While The Walking Dead will often bring us to the pit of television despair, its aftershow, The Talking Dead, is designed to pick us back up and pick up the pieces. People involved with the show as well as celebrity fans begin to process what just happened with host Chris Hardwick, and usually (but not always) when a character dies the actor playing him or her will come on afterwards to discuss it. It’s kind of like a Big Brother-esque exit interview.

But this time it was different.

First, Yeun didn’t show up on Talking Dead, although his schedule might not have allowed him to do so. Then, he wasn’t in Talking Dead’s weekly “In Memoriam,” in which they say goodbye to all of the Walkers (and sometimes people) who died this week. Glenn wasn’t included among them—only a line that read “Please let this not be true…”

And then take in this quote from The Walking Dead showrunner Scott M. Gimple, who gave a statement to The Talking Dead confirming that Glenn would return in some form to provide closure.

“Dear fans of The Walking Dead: This is a hard story to tell and when we were planning to tell we knew our friends at The Talking Dead would be talking to you about it and knowing you’d all be talking, and feeling and commiserating. I knew we should say something about it lest our silence say something we didn’t mean to say or not say. So I’ll say this: In some way, we will see Glenn, some version of Glenn or parts of Glenn again, either in flashback or in the current story to help complete the story.”

But if Hardwick can’t reassure us one way or another, then who can?

It’s going to be a long couple of weeks.