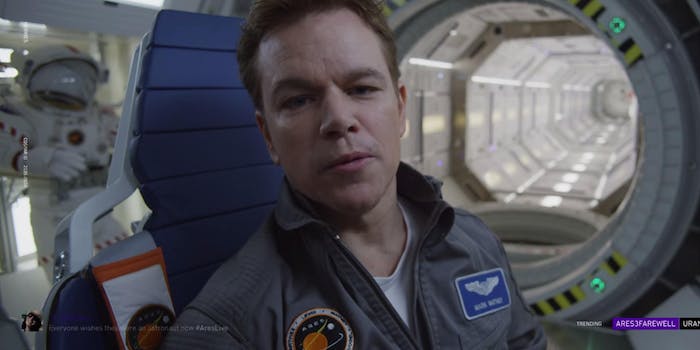 The Martian, a new movie about a manned mission to Mars that does not go as planned, is virtually guaranteed to be a hit among science-fiction fans. It’s based on a bestselling novel by Andy Weir, and it stars Matt Damon, Jessica Chastain, Rooney Mara, and Sebastian Stan. Oh, and it’s directed by Ridley Scott.

To promote the movie, the producers released this teaser, filmed in the style of a NASA vlog, with astronaut/botanist Mark Watney (Damon) giving us a tour of the ship and introducing the crew.

The presence of Matt Damon and Jessica Chastain in a near-future setting immediately brings to mind Interstellar, but this movie seems to have a more darkly humorous tone.

We can expect more vlog updates from the YouTube channel for the Ares 3 mission as the film nears its Nov. 25 release.